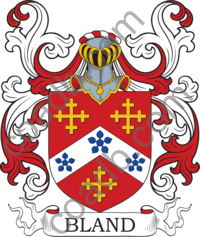 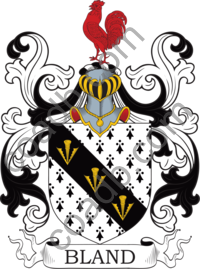 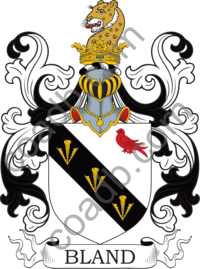 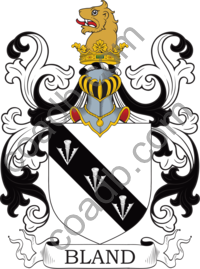 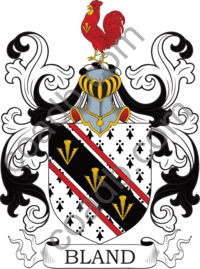 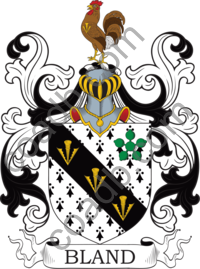 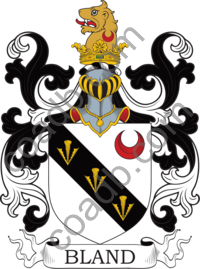 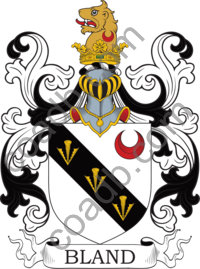 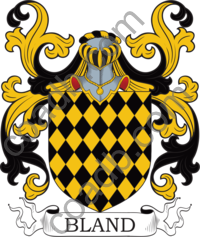 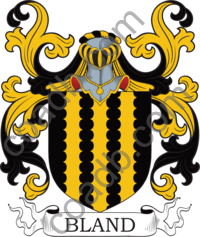 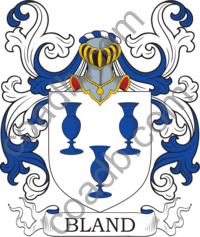 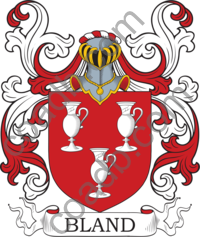 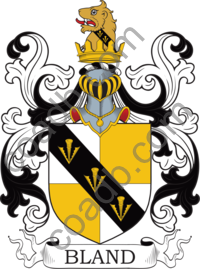 Origin, Meaning & Etymology
The surname Bland is an English habitational (or topographic) name that denoting someone from Bland, an area in Yorkshire, possibly derived from the Old English word gebland, meaning “storm” or “commotion”, with reference to the high, exposed position of the place. Alternatively, it could have developed from a French nickname that derived from the Old French word blant, from the Latin blandus, meaning “flattering”, or perhaps from the Old English blandan, meaning “blended”, a reference to the mixed-colored or grey hair of the bearer. It should be noted the modern English word bland (dull) did not come into use until the fifteenth century.

Sir Thomas Bland was born c. 1614, the son of Sir Thomas Bland and Katherine Savile. He married Rosamond Nevile, daughter of Francis, and had issue as follows: Francis, Rosamund, Katherine, Frances, Dorothy, Elizabeth, and Adam. He served King Charles against the rebels, as his name appears on the List of Gentleman Volunteers, and he commanded George Wentworth’s Division during the siege of Pontefract, for which he was created the 1st Baronet Bland of Kippax Park on August 30th, 1642. The family came into possession of Hulme Hall, Manchester in 1695.

Lieutenant General Humphrey Bland (1686-1763) was an Irish-born professional soldier who fought in the War of Spanish Succession. He was born in Lisburn, Northern Ireland, the second child of Thomas Bland, who may have descended from the Bland baronets of Kippax. The baronetcy lasted until 1756, when the 7th Baronet, Sir Hungerford Bland, passed away.

William Bland (1789-1868) was born in London, England, the son of Dr. Robert Bland. He was convicted of manslaughter and transported to Tasmania (then called Van Diemen’s Land). He criticized the Governor’s treatment of farmers, for which he was imprisoned for 12 months in 1818. He helped found Sydney Public Free Grammar School and contributed lands to the building of St. John’s Ashfield. He was accorded a State Funeral when he died in 1868.

Peregrine Bland (c. 1596-1647) was an early settler in Virginia and was a member of the Virginia House of Burgesses. He was born in England where he attended Emmanuel College. He was known to have one daughter, Hope Bland, who married William Beaumont.

Theodorick Bland (1629-1761) was a Virginia planter, merchant, and politician. He was one of sixteen children born to John and Susan Bland. He married Anna, daughter of Governor Richard Bennett, and he had sons: Theodorick (b.1663, had sons named John and Theodorick), Richard Bland (had five children, including Richard II and Theodorick Bland of Cawsons), and John (had issue named Richard, John, and Anna).

Theodorick Bland (1741-1790) was a physician, soldier, and statesman, who represented Virginia in both the Continental Congress and the U.S. House of Representatives. His grandfather was Richard Bland I (1665-1720), the son of Theodrick Bland of Westover and Anna Bennett.