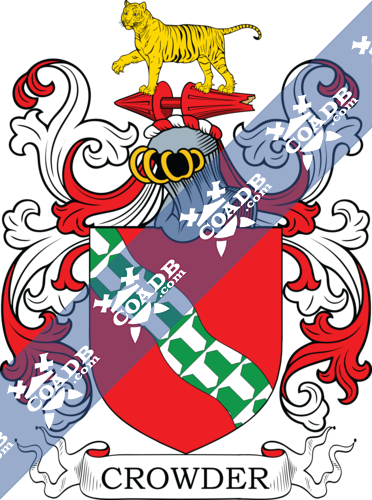 Crowder has two sources for its modern spelling, the first one is from Germany and it is a translation of Krauter to a phonetic spelling where English doesn’t use a soft ‘K’ sound in many of its words. Krauter is a pastoral occupational name meaning someone who was a gardener or someone who marketed fresh vegetables. The surname lingers on in Germanic today as a cognomen for a grumpy old man. The second birthplace come from medieval Wales. A early version of a violin, which was played either at the waist or in a lap was called a Crwth. Translated to English it is spelled Crowd, and a person who plays the instrument, a Crowder.

Alternative spellings can be found as, Crowd, Crowde, Cruther, Crowther, the medieval versions often include the French ‘le’ as a place name, or someone from Crowder. The first recorded instance where a Crowder name appears, is the Tax Rolls of Henry I of England, also known as ‘Long Shanks,’ because of his stature. He was also the English monarch who waged a successful war of conquest against the Scottish, earned him the name, ‘Hammer of the Scots.’

One Crowder family who remained in England was that of John Crowder Esq, of the Worshipful Company of Playing Card Makers in London, became a noted politician as first and Alderman of the ward of Farrington, and later served from 1829 to 1830 as the Lord Mayor of London, England. He died when he was 74 years old.

Lancashire, and the city of Lancaster are one of the traditional origins of the Crowder surname. Lancaster is located on the north-west coastline, and has traditionally been a major seaport for the English and later British Empire. Sussex and Middlesex are also also traditional locations for Crowder family antecedents. It is from these three locations Crowder family members began their immigration to the Americas. The earliest record of a Crowder leaving England was Hugh Crowder who departed for Jamestown Virginia in 1619. James I ordered a comprehensive inventory of the inhabitants of Jamestown in 1624-1625. In this census or muster as it was called, Hugh Crowder appears as having: three pounds of gunpowder; fifty pounds of shot (ammunition); six pieces of armour; six swords; 16 pounds of dried corn and a thousand pieces of dried fish, and he owned two buildings and a small fort for defense. It also notes he was head of household, but his wife or his children’s names were not listed at the time of the muster.

The Crowder family spread throughout Virginia, and lived there well into and beyond the Revolutionary War. One Phillip Crowder of Sangamon County Virginia, (1759-1844) was one such soldier. He enlisted in the early part of the way and was present when General Cornwallis surrendered his forces at the siege of Yorktown Virginia in 1781. Phillip Crowder is also one of the antecedents who is responsible for migrating westward from Virginia. He settled in the Illinois, Kentucky border region and married three times.

Virginia produced numerous soldiers during the American Civil war. Coleman Crowder served honorably throughout the war in the 5th Battalion Infantry alternatively known as Wilson’s Battalion and later when the commanders changed Archer’s Battalion. The state of Louisiana has no less than fourteen individual Crowder family members enlisting in over a dozen different battalions all throughout the entirety of the Louisiana’s involvement in the Civil War.

A Crowder of truly significant historical importance is Maj General Enoch Herbert Crowder of Missouri. He served in two Indian fighting campaigns of the 1800’s, first against Geronimo, then a decade later against Sitting Bull. He taught at USMA at West Point, became a lawyer while serving as an infantry officer, helped to craft the modern military code of uniformed justice, and just before the the beginning of Word War One, helped to create the selective service-(The draft.) He became the Judge Advocate General of the US Army in 1911 and served with distinction until 1923 when he became the Ambassador to Cuba. In his memory, the citizens of Neosho, Missouri have named a National Guard post after him, Ft. Crowder, which in turn was converted into the campus of Crowder University in 1963.

Places associated with the surname of Crowder:

1) (Clapham, co. Surrey). Gu. a bend wavy vaire ar. and vert. Crest—On the broken shaft of a tilting spear gu. an heraldic tiger pass. or.
2) (John Crowder, Lord Mayor of London in 1830). Motto—En Dieu est ma fiance. Quarterly, gu. and az. a bend wavy vaire or and erm. in the second quarter two swords in saltire surmounted by the Roman fasces erect ppr. within a chaplet of oak vert; in the third quarter a sword erect within a chaplet of oak all ppr. Crest—On a mount vert a tilting spear lying fessewise gu. thereon an heraldic tiger pass, or, wreathed round the middle with oak vert, holding a Roman fasces erect in the dexter paw ppr. 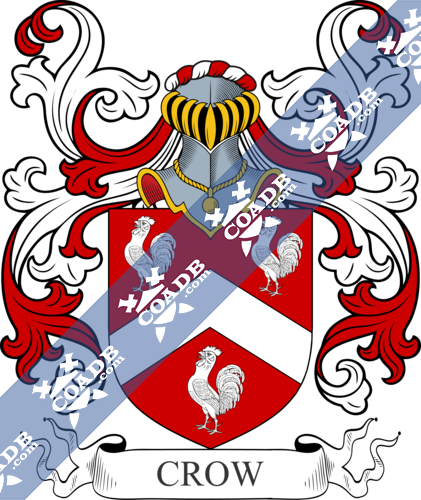 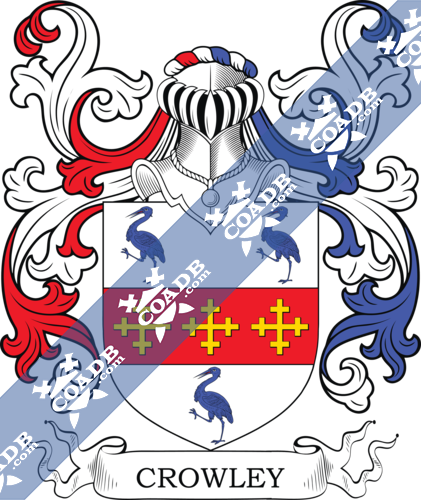