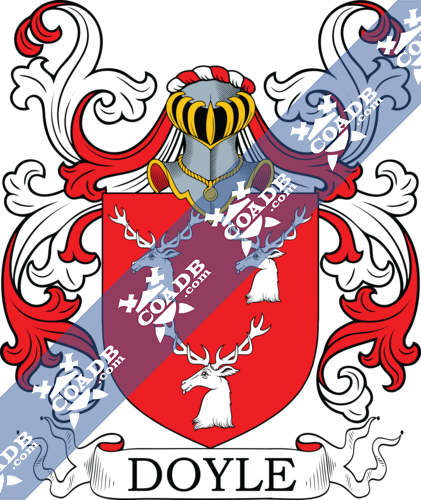 1) (Island of Guernsey, bart., extinct 1834; Sir John Doyle, G.C.B., 4th son of Charles Doyle, Esq., of Bramblestown, co. Kilkenny, Col. 87th regt., Governor of Charlemont, was so created 1825, d. unm.). Ar. three stags’ heads erased gu. within a bordure compony or and az. on a canton sa. a palm branch in bend sinister, and under it the word Egypt, both gold. Crest—1st: A Mameluke on horseback at full speed, in the act of throwing a djirid all ppr.; 2nd: Out of an eastern crown or, a stag’s head gu. attired gold, charged on the neck with a mullet of eight points, within an increscent ar. Supporters—Dexter, a light infantry man of the 87th regt., or Royal Irish, leaning on his musket with fixed bayonet all ppr.; sinister, a dragoon of the 12th regt. holding in the exterior hand a tri-coloured flag, thereon the word Lybia. Motto—Fortitudine vincit.
2) (bart). Motto—Fortitudine vincit.Ar. three bucks’ heads erased ppr. within a bordure compony or and az. Crest—Out of a ducal coronet or, a buck’s head, as in the arms.
3) (granted 1815, to Sir John Milley Doyle, Knt., Lieut-Col. in the Army. &c., &c.). Motto—Fortitudine vincit.Ar. on a chev. sa. betw. three stags’ heads erased gu. attired or, a representation of the golden cross with two clasps (presented to him by the King, in testimony of the royal approbation of his distinguished military services in Spain and Portugal), pendent from the centre chief by a crimson ribbon fimbriated purple betw. a representation of a Badge of a Member of the Turkish Order of the Crest, and a representation of a Badge of a Knight Commander of the Portuguese Order of the Tower and Sword, all within a border counter compony or and az. Crest—Out of a ducal crown or, a stag’s head gu. attired ar. charged on the neck with the golden cross, as in the arms.
4) (Arklow, co. Wicklow; Fun. Ent. of James Doyle, of that place, buried in the parish church of Arklow, Aug. 1638, grandson of Owen Doyle, of the same place). Ar. three bucks’ heads erased gu. attired or, within a border compony counter compony of the last and az. Crest—A buck’s head couped gu. attired ar. ducally gorged or.
5) (co. Norfolk). Gu. three bucks’ heads cabossed ar. (another, or). Crest—Out of a mural crown ar. an arm embowed ppr. vested sa. cuffed of the first, holding a spear of the second.
6) (co. Suffolk). Gu. three bucks’ heads ar.
7) Gu. three stags’ heads ar. attired or.
8) Ar. a fesse dancettee betw. three crescents gu. 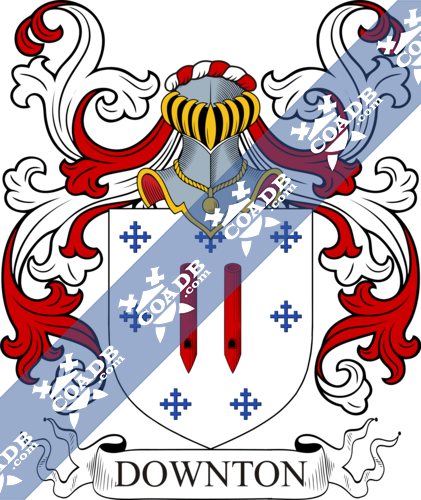 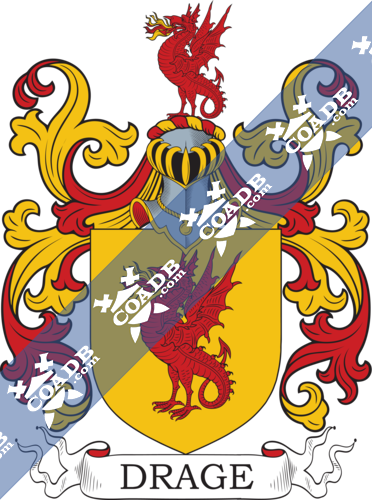