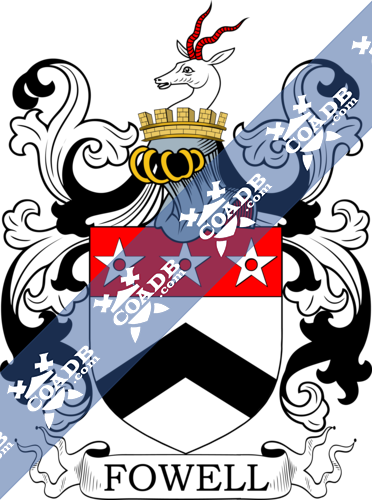 This interesting and uncommon name is of Anglo-Saxon origin, and acquires from the Old English pre 7th Century word “fugol”, poultry, bird, which was used as a byname and as a specific name. The specific name was noted in the Winton Rolls of 1066, from Hampshire, as “Fugel,” and first shows as a surname in the mid-12th Century. The old form of the word was the Middle English advancement “foul, fowl(e),” used as a continuation of the Old English specific name and also as a nickname for a person who in some way matched a bird. The new surname from this origin has a number of variant forms, ranging from Gowle, Fowell, Fuggle, and Vowell to the patronymics Fowl(e)s, Vowel(l)s, Vouls and Fuggles. One Nicholas le Fowel noted in the Worcestershire Premium Rolls of 1275. The wedding of John Fowle and Judyth Lyndeth listed in September 1579 at St. James’s, Clerkenwell, London.

The surname Fowell first appeared in Devon where they held a family seat as Kings of the Estate, said to have been seated there well before the Norman Invasion. The Saxon rule of English history declined after the Battle of Hastings in 1066. The language of the courts was French for the next three centuries, and the Norman ambience predominated.

The very first recorded spelling of the family was shown to be that of Wuluard Fugel, dated about 1166, in the “Pipe Rolls of Kent,” Huntingdonshire. It was during the time of King Henry II who was known to be the “The Builder of Churches,” dated 1154 – 1189. The origin of surnames during this period became a necessity with the introduction of personal taxation. It came to be known as Poll Tax in England.

Many of the people with surname Fowell had moved to Ireland during the 17th century.

The following century saw more Fowell surnames arrive. Some of the people with the surname Fowell who arrived in the United States in the 19th century included James Fowell, on record in the Windward Islands in 1722. Susanna Fowell, a bonded traveler, who arrived in Maryland in 1725.

(Fowell’s Combe, co. Devon, bart., extinct 1692; an Anglo-Saxon family, stated to have existed at Fowell’s Combe previously to the Conquest. Sir Edmond Fowell, of Fowell’s Combe, Knt., M.P. for co. Devon, was created a baronet in 1661; his grandson, Sir John Fowell, of Fowell’s Combe, the third and last baronet, M.P. for Totnes, d. in 1692, when the male representation of the family devolved upon his kinsman, William Fowell, Esq., of Black Hall and Diptford). Motto—Non ostento sed ostendo. Ar. a chev. sa. on a chief gu. three mullets pierced of the first. Crest—Out of a mural crown ppr. an antelope’s head ar. attired gu. Another Crest—A griffin’s head erased ar. struck through the breast with an arrow ppr. 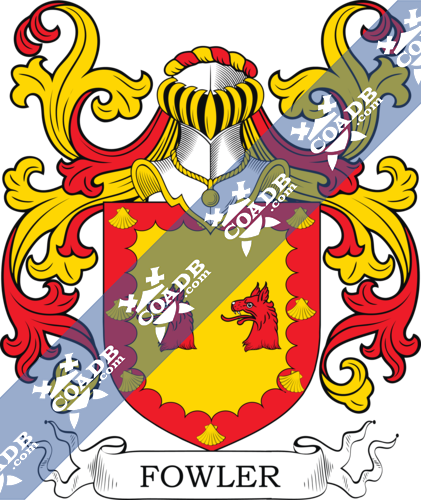