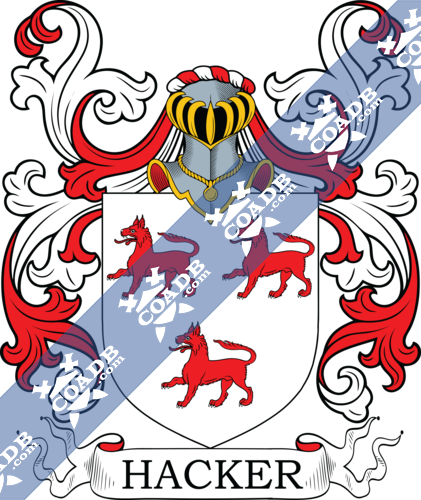 Derivatives for the surname Hacker can be found in German, “hacken” and Dutch “hakken”, both of which translate “to chop”. The name was thought to have been applied to a hewer or cutter of wood, and or a lumberjack. There is also a Hebrew occupational name of “heker” which translates to “butcher” and the medieval English “hacken” translates to mean “hack” and was use in reference to a “woodcutter” or a maker of agricultural tools. In all context, the names are occupational.

Surnames came from a variety of sources, one person may have been identified by their given name plus their occupation while another may have been identified by their given name and one of their parent’s names. There was a boundless supply from which surnames could be culled, in addition to the use of patriarchal and matriarchal names or reference to the individuals occupation, there were things such as defining physical traits, a familiar geographical location or a topographical landmark found near the individuals home or birthplace, the name of the village in which the person lived.

The common use of surnames throughout Europe did not actually take hold until the mid to late 16th century, prior to this time, the use of surnames had been a practice primarily reserved for the nobility. However, over time the use of surnames proved to serve a practical purpose, as it made the keeping of records for censuses, taxation, and immigration easier. Record keeping usually was the responsibility of churches, priories, and government offices, this was due in large part to the high rate of illiteracy. During the medieval period and earlier, literacy was a skill mostly found only among the nobles, the clergy, and government officials and scribes. It was the harnessing of civil record keeping tied to military enlistments, especially with the advent of the religious wars which racked Europe in the 17th century which cemented the use of a surname. Even still, a wide variation in the spelling of many surnames occurred due to to a lack of continuity regarding the lack of guidelines and rules for spelling. This was compounded by the diversity of languages in use in European countries at this time and the fact that a lot of spelling was done phonetically. What may have sounded one way to one person may have sounded completely different to another. The variations in the spelling of this surname include but not limited to; Hacker; Hatcher; Hatchers; and Hacher. One of the earliest listings of the name or a variation of its spelling is Adam le Hakkere found in official census documents dated 1262. After the discovery of America, immigration began occur in greater volume than ever before. Some of the earlier immigrants to America were Alice Hacker who landed in 1636 and settled in Virginia. Walter Hacker immigrated in 1637 and settled in Virginia in 1637 and Margery Hacker landed in 1647 and settled in Virginia as well.

There are many persons of note who bear the surname Hacker. Colonel Francis Hacker was born in Nottinghamshire.

Hacker fought in the English Civil War on the Parliament side. At the conclusion of the war, fought over principally, political power, and authority, the Parliamentary side claimed victory and King Charles I was held captive by the Scottish Presbyterian army which later turned him over to the Parliament forces. He was one of the 135 commissioners called to hear charges against the King during his trial in 1649. Of those called, forty-seven refused to participate. At the end of the trial which lasted four days, fifty-seven of the commissioners who were present considered the charges against King Charles I and signed the official documents condemning the King to death. The following day, the execution of the King was carried out.

English born classical painter Arthur Hacker is renowned for his paintings depicting religious scenes and portraits. He credited his travels through Spain and North Africa as major influences in his work.

He studied in Paris at the Atelier Bonnat and the Royal Academy in London where his was invited to exhibit his work on two separate occasions. In 1910, he was elected an Academician of the Royal Academy.

Philammon in the Liverpool Walker Art Gallery and The Temptation of Sir Percival in the Leeds City Art Gallery.

One of the more prominent Hacker/Hatcher family members is Terri Hatcher Actress, born in Palo Alto California. She has starred in numerous movies and TV shows, most notably for appearing as Lois Lane in Superman, and Desperate Housewives. She is the daughter of Esther and Owen W Hatcher.

1) Heathcote-Hacker, East Bridgford, Old Hall, co. Nottingham). Quarterly, 1st and 4th, erm. three pomeis, each charged with a cross or, for Heathcote; 2nd and 3rd, sa. a cross vair betw. four mullets or, pierced of the field, for Hacker. Crests—1st: On a mural crown az. a pomeis charged with a cross or, betw. two wings. displ. erm., for Heathcote; 2nd: A woodpecker standing on the top of a tree eradicated ppr., for Hacker.
2) (Trowell and Flintham, co. Nottingham). Az. a cross vaire or, and of the first betw. four mullets pierced of the second. Crest—On the trunk of a tree fesseways a moor­cock ppr.
3) Ar. three wolves pass. gu. 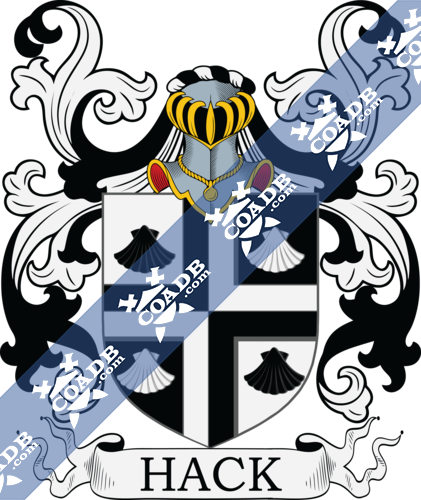 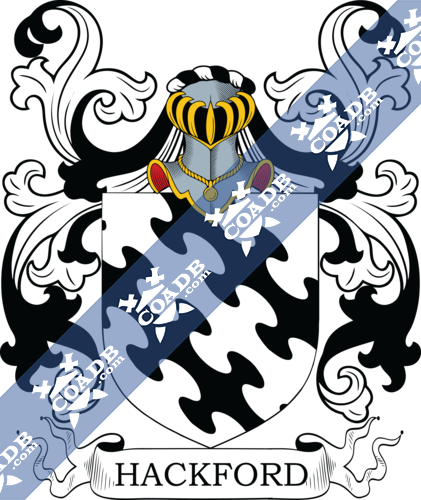