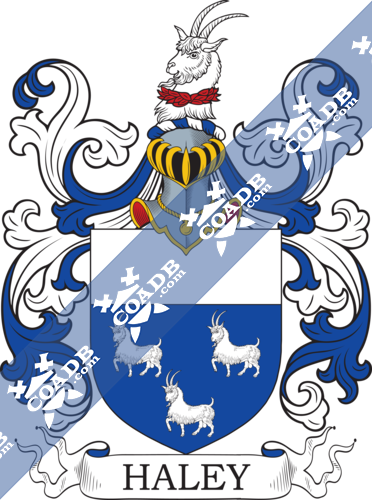 Haley Surname Name Meaning, Origin, History, & Etymology
This popular Anglo-Saxon last name developed as an English habitational name denoting a person from any of several towns/villages named Haley, primarily in West Yorkshire, derived from the Old English words heg, meaning “hay” and leah, meaning “woodland clearing”. There have may also have been a place (probably a parish) in Oxfordshire known as Hailey, recorded as Hyle and Hayle in the Hundred Rolls of 1279 AD. It is also possible the name is topographic, and referred to a person who lived next to a hay clearing. Yet another origin theory as to the history/meaning of the Haley surname is offered by Elsdon Smith Coles in his 1956 book titled Dictionary of American Family Names: “Dweller at the way, or age, leading to the hall”. In some cases, it is also an Irish surname, as it is a spelling variant of the anglicized Irish surname Healy.

Early Bearers of the Haley Surname
The first known bearers of this surname was William de Hayleg who was documented in the Feet of Fines of Warwickshire c. 1251 AD. The Hundred Rolls of 1273 AD, a census of Wales and England, known in Latin as Rotuli Hundredorum lists one bearer of this surname: Petrus Haley (Oxfordshire). The Poll Tax Rolls of Yorkshire in 1379 AD also list two bearers: Johannes de Haylay and Willelmus Havlay. 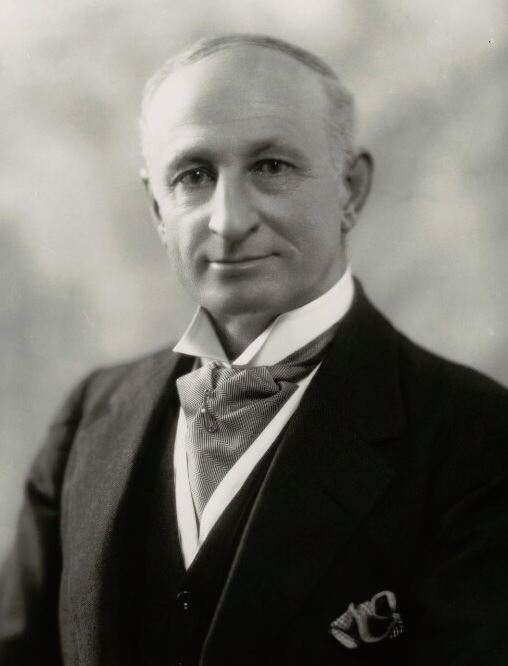 Baron Hailey
The lineage of ancestry of this family begins with George Hailey, a yeoman, of Arlesey, county Bedford, England, who died in 1712. His son, George Hailey, of Shefford, county Bedford was born in 1716. He was a surgeon. He had a son named Thomas. Thomas Hailey of Pirton, county Hertford, was born in 1751. He had a son named William. William Hailey, of Oundle, Northants, and Arlesey, was born in 1789. He had a son named Hammet. This son, Hammey Hailey, of Tickford Lodge, Newport Pagenell, county Buckingham, was born in 1823. In 1864, he married Maria Coelia, daughter of John Clode of Great Linford, and had issue with her as follows: 1) Hammet Reginald Clode (married Rhoda, daughter of Reverend S. Cotes and had issue), 2) Rupert Clode (married Nesta Cotes Masterman), 3) William (see below), 4) Ethel Maria, and Violet Madeline (married Leslie Brutton Clode). His son, Sir William Malcom Hailey, of Shahpur in the Punjab, and Newport Pagnell, county Buckingham, England was born in 1872. He was educated at Oxford and received an M.A. in 1929. He held numerous positions and was Governor of Punjab from 1924-1928. In 1896, he married Andreina Alessandra, daughter of County Hannibale Balzani of Rome, Italy, and had issue with her as follows: Alan Balzano (Lieutenant of the Pioneer Corps, served in World War II) and Gemma (b. 1898).

Middlesex to Rhode Island
John Haley was born in London, Middlesex, England c. 1590 AD. He married Joan, daughter of John Speed, and had a son with her named William. William was born in London c. 1620 (although an alternative forefather is also suggested). He came to colonial America. He had a son named John Haley who was born in Portsmouth, Newport, Rhode Island c. 1650. He married Ann Lloyd and had a son with her named Edward. Edward was born in Virginia c. 1675. He married Catherine Prerrin and had issue with her as follows: John Anderson Sr., Valentine, Sarah, William, Benjamin, James David, Ambrose, Elizabeth, and Thomas. Three of his sons are discussed as follows: 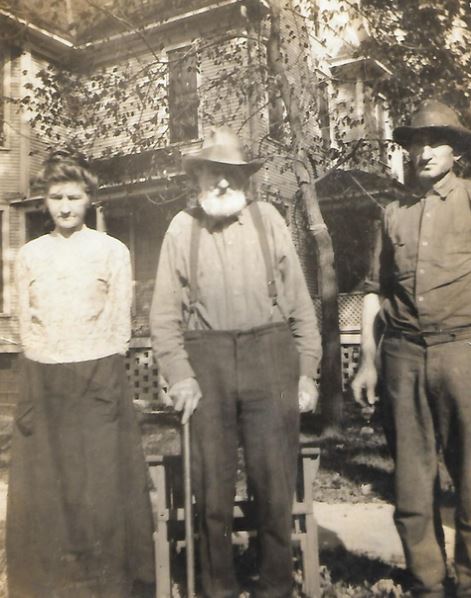 1) John Anderson Haley Sr. was born in Virginia in 1710. He married Mary, daughter of Richard Anderson. Geni.com states the following regarding John: “Perhaps the first land owned by John and Mary Haley was a tract of 400 acres lying on the south side of Robinson Run in Spottsylvania, which they purchased for £50 from Robert Williamson and his wife Elizabeth on the 2nd of October, 1744”. He had issue as follows: Elizabeth, Mary, John R., Thomas, James Robert, Susannah Suckey, Humphrey, Ambrose, Henry, Sarah, Benjamin, William, Michael and Federick.
2) William Haley was born in Virginia in 1714. He married Henrietta (surname unknown) and had a son with her named Frances. He died in Kentucky in 1803.
3) James David Haley was born in Virginia in 1715. He married Isabella Esther Murray and had issue with her as follows: Isaac, Elizabeth, David W., Valentine Julia, Lucy, Sarah “Sally”, and Sally.

Some of the earliest settlers in New Zealand bearing this name include:
1) Susan Haley, of Middlesex, England, a servant, came to Otago aboard the Buckinghamshire in 1874
3) Joseph Haley came to Hawkes Bay aboard the Halcione in 1874

Notables
There are hundreds of notable people with the Haley surname. This page will mention a handful. Famous people with this last name include:
1) William John Clifton Haley (1925-1981) was an American rock and roll musician active in the 1950s, known for songs such as Rock Around the Clock, See You Later, Alligator, and Shake, Rattle, and Roll, considered to be one of the first people to popularize the genre, born in Highland Park, MI
2) John Hailey (1835-1921) was a member of the US House of Representatives from the Idaho Territory from 1885-1887 and 1873-1875, born in Smith County, Tennessee
3) Charles Lewis Haley (1964) was a former linebacker in the NFL who plated from 1986-1999 for two teams: Dallas Cowboys and San Francisco 49ers, having won 5 Super Bowls, born in Gladys, Virginia
4) James Andrew Haley (1899-1981) was a member of the US House of Representatives from 1953-1977, born in Jacksonville, Alabama 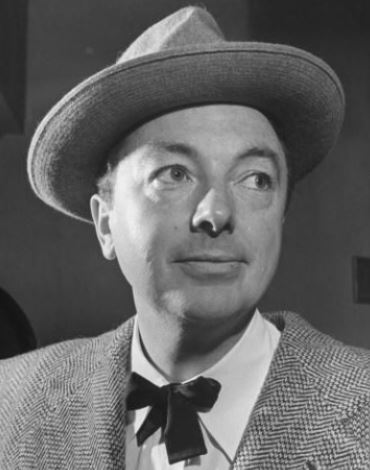 5) John Joseph Haley Jr. (1897-1979) was an American vaudevillian actor, comedian, singer, dancer, and radio host born in Boston, Massachusetts, best known for her portrayal of the Tin Man from The Wizard of Oz
6) Alexander Murray Palmer Haley (1921-1992) was a black American writer and author, best known for Roots: The Saga of an American Family, which was made into a famous television miniseries that aired on ABC in 1977, born in Ithaca, New York, having served in the US Coast Guard from 1939-1959
7) Michael Haley is a Canadian ice hockey played who has played in the OLH, ECHOL, AHL, and NHL from 2002-2018, born in Guelph, Ontario
8) Edmond Halley (1656-1742) was an English astronomer, physicist, mathematician, and meteorologist,  born in Haggerston, Middlesex, who constructed at observatory on Saint Helena, whose observations of helped prove Isaac Newton’s laws of motion, and used such laws to predict the periodicity of Halley’s Comet
9) Joshua Hailey was an American privateer in the War of 1812, having commanded the True Blooded Yankee and attacked British commerce in the Irish Sea, evening seizing an island which he held for 6 days
10) Oscar E. Hailey (1870-1958) was the 16th and 18th Lieutenant Governor of Idaho from 1927-931 and was a member of the Idaho Senate from 1919-1926, born in Illinois

1) (London, and Edgware-Bury, co. Middlesex). Az. three goats pass. ar. a chief of the last. Crest—A goat’s head erased ar. gorged with a chaplet gu.
2) (Eartham, co. Sussex). Or, on a cross az. a cinquefoil betw. four mascles of the field. Crest—On a crescent ar. a cross patonce gu. (Also see O’Haly, Healy, Haly).
3) Gules a fess checky azure and argent between in chief two arrows in saltire points upward between the upper parts thereof a mullet of five points between a pair of wings conjoined argent and in base an escutcheon Gules a thistle slipped and leaved or within a bordure argent. Crest: A demi-swan wings elevated and addorsed argent holding in the beak a pair of balances or. Source: USHR.
4) Hayley – (co. Salop: granted 1701, to Wm. Hayley, of Cleobury Mortimer). Or, on a cross az. a cinquefoil betw. four mascles of the first. Crest—A crescent ar. charged with a cross pattee gu. Source: Burke’s.
5) Hayley – Or, a fret gu. Crest—A demi boy ppr. Source: Burke’s. 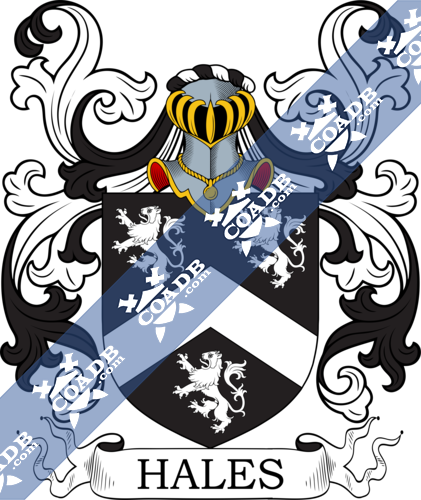 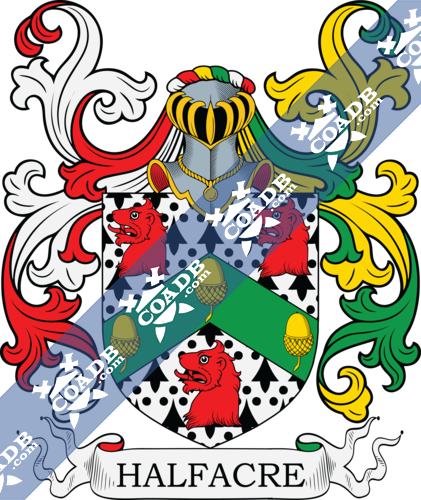