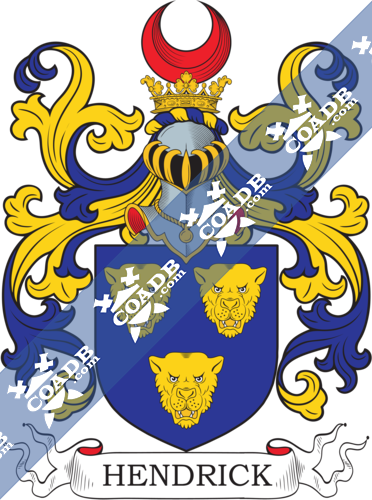 Origins of Hendrick:
Listed in Europe in some four hundred surnames spelling forms since the old times, this name is a derivative of the pre 7th-century German particular name “Heim-ric,” meaning “home rule.”  Compound names of this type, were very famous in the centuries proceeding the introduction of surnames in the 12th century, and this is a good example of the genre.  Registered in such varied spellings as Henrich, Hendrich and Henrick (German), Hendry, Henry and Henryson (English and Scottish), Aimeric, Enric and Henric (French-Provencal), Hendrick, Hendrik, and Hendrickson (Flemish), Jendircke, Gendricke, Jina, and Jindrick (Czech & Slavonic), the Spanish Enriques, and the Hungarian Jendrassik, the name, as a first name, was most famous in England, no less than eight kings being so-called, but as a surname the name is most popular in Northern Europe.  In Ireland, the surname has two possible derivatives.  The first is from the 12th century Norman settlers originally called FitzHenry, the second and most likely, is as an anglicised form of the Gaelic “O’Inneirghe,” which has the unique meaning of “The descendant of the abandoned one.”  Early examples of the surname record derived from authentic charters of the period include John Fitz Henrie in the Calender of Inquisition, London, in the year 1346, Genetiv de Heinrich of Fritzlar, Germany, in 1335, and John Hendrie of Cornwall, England, in the year 1359.

England:
The surname Hendrick first appeared in Fife, where they held a family seat from very early times, some say well before the Norman Invasion and the arrival of Duke William at Hastings in 1066 AD.

Ireland:
Many of the people with surname Hendrick had moved to Ireland during the 17th century.

Canada:
People with the surname Hendrick settled in Canada in the 19th century.  Some of the individuals with the surname Hendrick who came to Canada in the 19th century included Ms. Mary Hendrick, aged 20 who moved to Canada, arriving at the Grosse Isle Quarantine Station in Quebec aboard the ship “Bee” departing from the port of Cork, Ireland but died on Grosse Isle in June 1847.

Australia:
Some of the individuals with the surname Hendrick who landed in Australia in the 19th century included Thomas Hendrick, a shoemaker, arrived in Van Diemen’s Land (now Tasmania) sometime between 1825 and 1832.

(granted by Hawkins, Ulster, 1703, to John Hendrick, Sheriff of the City of Dublin, descended from a family of that name in Brabant). Az. three leopards’ faces or. Crest—Out of a ducal coronet or, a crescent gu. 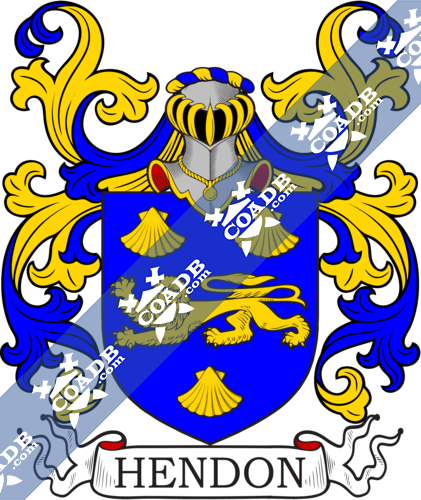 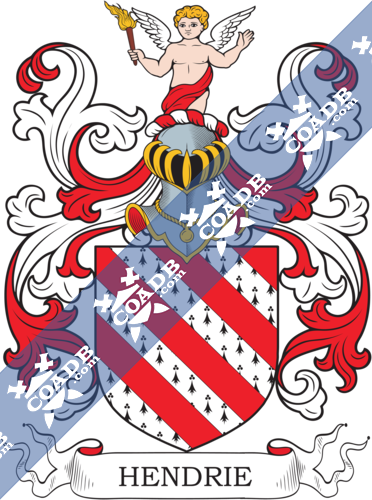