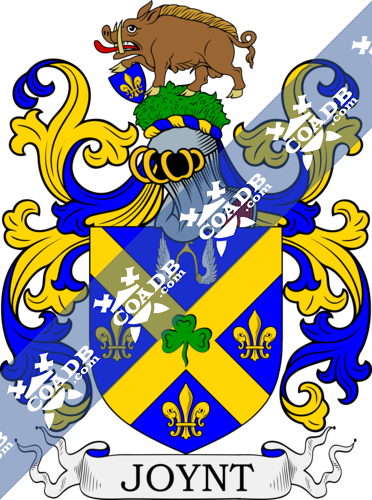 1) (granted to Christopher Joynt, M.D., son of Henry Joynt, Esq., of Ballina, со. Mayo, by Eleanor, his wife, dau. of William Johnson, of Molaugh, co. Mayo, and grandson of Henry Joynt, Esp., Kinnaird House, co. Mayo, and to their descendants). Ar. on a saltire or, betw. in chief a spur of the second winged ar. and three fleurs-de-lis, two in the flanks, and one in base of the second, a trefoil slipped vert. Crest—On a mount vert a boar passant ppr. resting the foreleg on an escutcheon az. charged with a fleur-de-lis
or. Motto—I hope.”
2) (granted to William Lane Joynt, Esq., of Grange Abbey, Baldoyle, co. Dublin, Queen’s Clerk for co. Limerick, an Alderman and afterwards Lord Mayor of Dublin, only son of William Joynt, of Limerick, merchant). Az. an eagle’s head erased betw. three saltires couped ar. Crest—Issuant out of a chaplet of oak leaves vert, two eagles’ heads conjoined, the dexter gu. the sinister az. Motto—Nec degenero.
3) (Francis George Joynt, M.D., Surgeon-General H.M. Indian Medical Service, son of Anthony Joynt, of Ballina, co. Mayo, by Diana, hia wife, dau. of George Atkinson and Dinah Cormac, his wife, and grandson of Frank Joynt, of Ballinglen, co. Mayo). Ar. on a fesse dancettee az. betw. three eagles displ. gu. each charged on the breast with an escallop of the first, an Eastern crown betw. two fleurs-de-lis or. Crest—A cubit arm ppr. charged with an escallop ar. and grasping in the hand a battle axe also ppr. Motto—Nec temere nec lente. 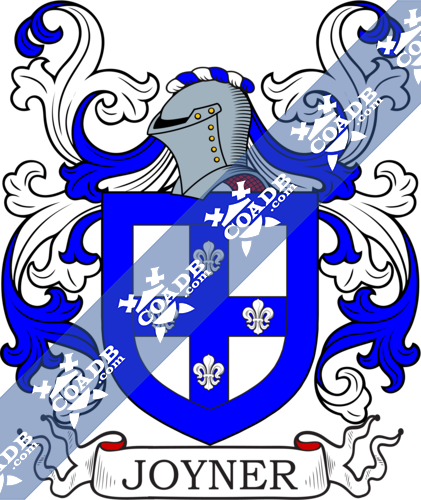 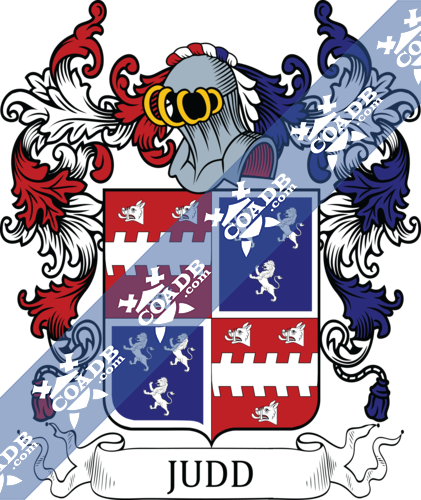