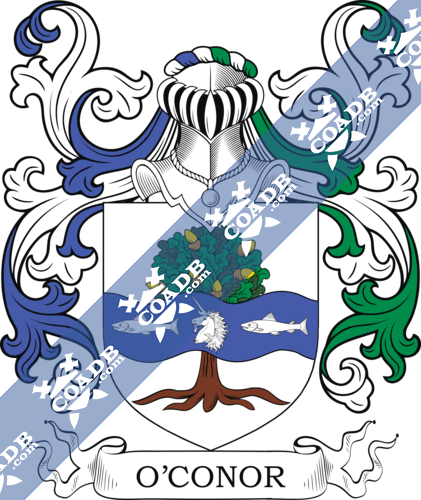 1) O’Connor Kerry – (a Sept descended from Mathgamhan O’Conchorhair, King of Cairraighe, 1138, i.e., that part of the present co. Kerry extending from the Strand of Tralee to the River Shannon). (co. Kerry; Thomas O’Connor, Esq., The Spa, Tralee, co. Kerry, 1846, and his brother, Rev. Charles James O’Connor, Glancullen, co. Dublin). (Carrigfoile, co. Kerry; Fun. Ent. Ulster’s Office, 1639, John O’Connor, of that place, who had four daus. his co-heirs, the third of whom, Mary O’Connor, m. Connor O’Connor, of Kariragh, in same co., heir to the lands of his father-in-law). Vert a lion ramp. double queued and crowned or. Crest—A dexter arm embowed in mail garnished or, the hand grasping a sword erect ppr. pommel and hilt gold. Motto—Nec timeo, nec sperno.
2) O’Connor Failghe – (a Sept in Leinster, who were descended from Rossa Failghe, son of Cathaoir Моr, Monarch of Ireland, and possessed the territory of Ну Failghe, extending over the baronies of Offaley, co. Kildare, and portions of the King’s and Queen’s cos. This Sept was the parent stock of O’Doinn and O’Dempsey).(Gortnamona, or Mount Pleasant, King’s co.; descended from O’Connor Failge. The representative, Murice Nugent O’Connor, Esq., of Mount Pleasant, d. 1818, leaving four daus., his co-heirs, viz., Catherine, Countess of Desart; Mary, Mrs. Tuite, of Sonna; Julia, who d. unm.; and Elizabeth, who m. 1822, Rev. Benjamin Morris) Ar. on a mount in base vert an oak tree acorned ppr.
3) (Corcomroe; a Sept which held considerable estates in the co. Clare down to 1584). Vert a stag trippant ar. Crest—A hand in a gauntlet erect holding a broken dart all ppr.
4) (Glean-Geimhin and Cianachta, now the Barony of Keenaght, co. Londonderry; a Sept of the same race as O’Carroll, who were driven out of their territory by the O’Carans before the English invasion). Ar. on a mount in base an oak tree all ppr.
5) (Newtown, King’s co.; Fun. Ent. Ulster’s Office, 1675, Donough O’Connor, son of John O’Connor, of same place, was buried with his father at Killihie, in same co., leaving an only son, John O’Connor). Ar. an oak tree eradicated ppr.
6) (Derrymolin, King’s co.; impalement Fun. Ent. Ulster’s Office, 1640, William FitzGerald, Esq., of Rahannan, co. Kerry, whose wife was Mary O’Connor, dau. of Charles O’Connor, Esq., of Derrymolin). Ar. an oak tree eradicated vert fructed and charged with a lizard pass. or, a crescent for diff.
7) (Kings of Connaught; Roderick O’Conor, King of Connaught, was elected Monarch of Ireland, and resigned the sovereignty to Henry II., d. in the Monastery of Cong, a.d. 1198). Ar. an oak tree eradicated ppr.
8) O’Conor Don – (descended from Caher, or Charles O’Conor (Crobhderg), King of Connaught, d. 1224, brother of Roderick O’Conor, last Monarch of Ireland. Sir Hugh O’Conor Don was knighted at Meath, 24 July, 1599, by Robert, Earl of Essex, Lord-Lieutenant of Ireland. O’Conor Don, M.P., со. Roscommon, is Chief of the House of O’Conor). (Mount Druid, co. Roscommon). (Dundermott, co. Roscommon). (Milton, co. Roscommon). Ar. an oak tree vert, surmounted by a crown. Crest—An arm embowed in armour holding a short sword entwined with a serpent all ppr. Motto—О Dhia gacli an cabhair.
9) O’Conor Roe – (Teige O’Conor; the representative of this line was a Colonel in the French Army in 1700). Erm. an oak tree eradicated and acorned ppr.
10) O’Conor Sligo – (descended from Brian O’Conor, younger brother of Roderick O’Conor, last Monarch of Ireland; Sir Daniel O’Conor Sligo was knighted by Sir Henry Sydney, Lord-Deputy of Ireland, 1567). Per pale vert and ar. in the dexter a lion ramp. to the sinister, in the sinister on a mount in base vert an oak tree ppr. Crest—An arm in armour embowed holding a sword all ppr.
11) (a branch of O’Conor Roe). Ar. an oak tree eradicated and acorned ppr. over all on a fess wavy az. a unicorn’s head erased betw. two salmon naiant of the first.
12) alias Lee (the Sept of O’Laodhog, or O’Lee, hereditary physicians to O’Conor, King of Connaught. Lee, or O’Conor, a professer of physic, was buried in Dublin, 20 Dec. 1595). Ar. an oak tree eradicated ppr. on a fess wavy az. a fox’s head erased of the first betw. two fish naiant or.
13) Vert, a saltire or. Crest—A hand holding a hawk’s lure.
14) (Ireland). Ar. two boars’ heads erased in chief, and a galley, her oars in action, in base, sa. Crest—Out of a ducal coronet a hand ppr. vested sa. holding the sun or.
15) Vert a lion ramp. double queued, or. Crest—A dexter arm embowed in armour ppr., garnished or, the hand grasping a short sword ppr., the hilt and pommel of the last. Motto—Min sicker reag. 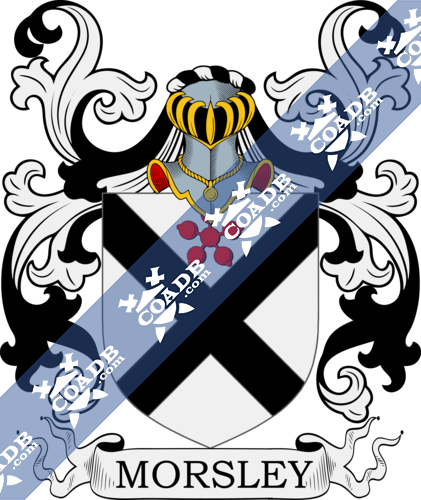