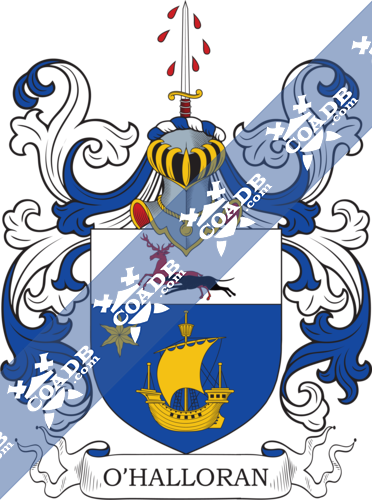 1) (Chiefs of Clan Fergaill, a large territory near Lough Corrib, co. Galway). Gu. a horse pass. ar. saddled and bridled ppr. on a chief of the second three mullets az. Crest—A lizard or. Motto—Clan-Fergail a-bu.
2) Az. a boat with mast and sail spread or, in dexter chief an estoile of the last, on a chief ar. a stag in full course gu. pursued and seized in the shoulder by a greyhound sa. Crest—A sword erect distilling drops of blood all ppr.
3) (granted by Betham, Ulster, to Sir Joseph O’Halloran, G.C.B., a distinguished Indian military officer). Quarterly, 1st and 4th, az. a castle of two towers with a curtain wall and portal approached by three steps ar. standing on a mound vert, on which is inscribed the word “HURREHURPORE,” gold, in chief a sword and an Indian sabre in saltire ppr. pommels and hilts or, surmounted by an Eastern crown of the last, for O’Halloran; 2nd and 3rd, gu, a horse pass. ar. on grass ppr. caparisoned az. bridled and saddled or, on a chief of the second three mullets pierced of the third, for O’Halloran (ancient), over all a cross of pearls ppr. Crests—1st, for augmentation: Out of an Eastern crown or, an arm in armour ppr. garnished gold, the hand in a gauntlet also ppr. grasping a flagstaff, therefrom flowing a standard az. charged with a monkey statant also or, motto over, PURSWARRIE; 2nd, O’Halloran (ancient): A lizard pass, or, motto over, Clan-Fergail a-boo. Motto—Lothim agus marbhaim (I wound and I kill). 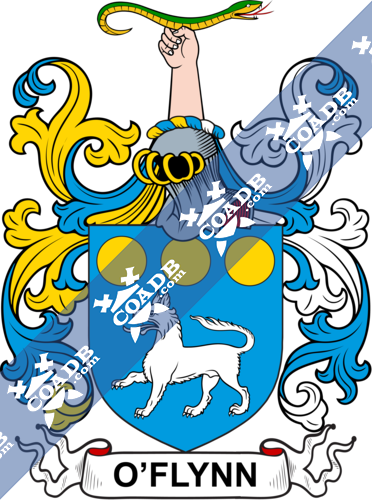