1) or O’Rorke – (a Sept who were Chiefs of West Breifne, now comprised in the counties of Cavan and Leitrim, deriving their surname from Ruaire, a chieftain, d. a.d. 893. Three of this Sept were kings of Connaught, of whom the most distinguished was Art O’Rorke, King of Connaught, slain a.d. 1046). Or, two lions pass, in pale sa. Crest—Out of an ancient Irish crown or, an arm in armour erect, grasping a sword ppr. pommel and hilt gold, motto over, Buagh, i.e., Victory. Motto—Serviendo guberno.
2) or O’Rorke -(Sir Brian O’Rorke, knighted at Dublin 3 May, 1579, by Sir Henry Sydney, Lord Deputy of Ireland). (Cloncorick, co. Leitrim; Fun. Ent. Ulster’s Office, 1637, Shane Oge Mac Shane O’Rorke, son of Shane O’Rorke, grandson of Loughun O’Rorke, and great-grandson of Owen O’Rorke, all of same place). Or, two lions pass, in pale sa.
3) or O’Rorke -(Sir Teige O’Rorke, knighted by Sir George Cary, Lord Deputy of Ireland, 17 April, 1604). Quarterly, 1st and 4th, or, two lions pass. in pale sa.; 2nd and 3rd, ar. two boars pass, in pale gu.
4) or O’Rorke -(Nantes, France; allowed by Hawkins, Ulster, 1770, to Edmond Roch O’Rourke, of that place, descended from Thady O’Rorke, Lord of Breifne, co. Leitrim, 1470, by Agnes, his wife, dau. of Hugh McGuire, Lord of Fermanagh). Same Arms. Crest—Out of a crown or, an arm in armour erect grasping a sword ppr. Motto—Victorious.
5) or O’Rorke -(Count O’Rourke, in the Kingdom of France; allowed by Bryan, Deputy Ulster, 1782, to John O’Rourke, Count O’Rourke, who was born in the parish of Oghteragh, in Breifne, emigrated to France, served as captain of the Royal Scotch in that kingdom, major of horse in the service of Russia, afterwards colonel of horse in France, created a count by‘the King of France, 1771). Per pale or and ar., on the dexter side three lions pass. sa. on the sinister in chief a tabby cat couchant guard, to the sinister aide of the shield ppr. supporting in a bend a flagstaff or, thereon a pennon gu. inscribed with the word “ buadh,” letters gold, in base a boar pass. of the fourth. Crest—Out of a royal crown a naked arm erect, holding a scymitar all ppr. Motto—Victorious. 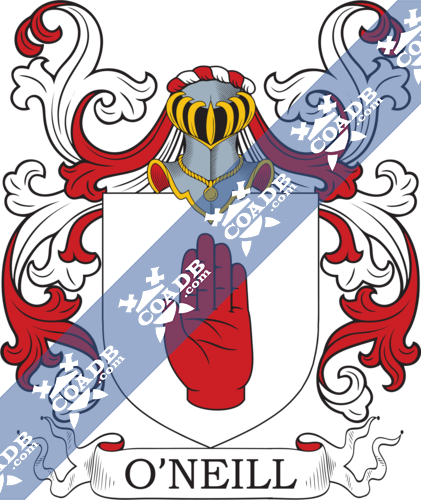 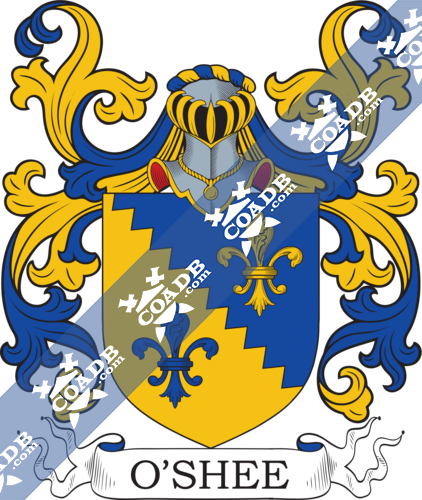