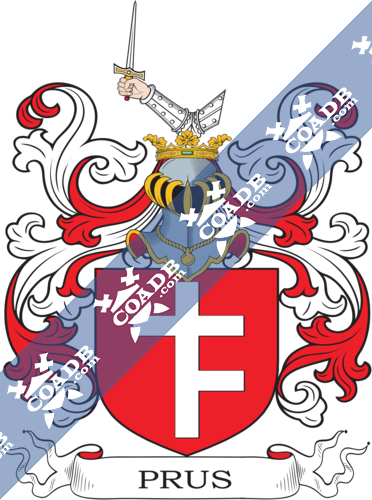 Prus is an old Polish demonym used while referring to a person hailing from old Prussia (before the Teutonic conquest). According to a legend, the arms “Prus” was granted by king Bolesław II the Generous to three Prussian princes, who settled in Poland after the martyrdom of St. Adalbert of Prague in 997. The cross was an obvious charge, because the princes were converted pagans. The legend is at least partially true, because Polish genealogists agree on a fact that early members of the Prus clan arrived sometime in XIII century from old Prussia to Mazovia, where they intermarried with local minor nobility and perhaps even adopted and modified its arms. Coat of arms “Prus” is among the oldest Polish coats of arms. The oldest known mention of “Prus” arms is from 1389, and its oldest depiction is on seal from 1456. Coat of arms “Prus” was known under alternative names Półtora Krzyża (One-and-a-half cross), Słubica, Turzyna, Wagi, Wiskałła, Wiskawa, Wiszczała.

Probably the most widely known member of Prus clan was Bolesław Prus, real name Aleksander Głowacki (1847-1912), Polish novelist, journalist, short-story writer. Prus arms is also associated with bishop Stanislaus of Szczepanów (1030-1079), martyr and one of the saint patrons of Poland and Kraków city, although he lived long before Prus coat of arms was even mentioned. Polish modernist painter and art critic Eligiusz Niewiadomski (1869-1922) was also a member of Prus clan. Wacław Szybalski (born 1921 in Lwów), currently a professor of oncology at the McArdle Laboratory for Cancer Research, University of Wisconsin–Madison Medical School, comes from Prus clan. Certain sources associate with Prus clan a Republican member of the US House of Representatives from New York, Polish-American Joseph Mruk (1903-1995).

It is possible, that two other Polish arms and clans were spawned from Prus, by addition of new elements to the old Prus arms. They are also called Prus: Prus II (Prus secondo) which spawned further modification called Prus III (Prus tertio).

Coat of arms Prus II according to a legend was granted around 1047 to a knight coming from Prus clan. The knight fought for Polish prince Casimir I the Restorer as a commander-in-chief against the rebellious Miecław, a self-proclaimed prince of Mazovia. For his bravery and sacrifice (he was twice wounded) he received and addition to old arms in form of two wolf-hooks – taken from coat of arms of the knight’s opponent. The oldest mention of “Prus II” arms is from 1401, while its oldest depiction is on seal from 1402. Its alternative names are Wilczekosy, Wilcze Kosy, Falcastrum Lupinum (Wolf hooks), Słubica.

Coat of arms Prus III according to a legend was adopted by a descendant of the knight who received Prus II coat of arms. He married a very wealthy girl from Pobóg clan, who bore in her arms a horseshoe with a cross on an azure field. The knight decided to create a whole new coat of arms by mixing his and his wife’s arms. The descendant of this knight, who lost his leg during a battle for king Bolesław, received golden armed leg in crest from grateful king. The oldest mention of Prus III is from 1415, while its oldest depiction is on a seal from 1461. Alternative name of Prus III is Nagody, which means To the wedding and alludes to its legendary beginning.

Probably the best known Polish figure from Prus III clan was Stanisław Jabłonowski (1634-1702), Polish military commander under king Jan III Sobieski. His descendants acquired titles of counts and dukes, and his grandson Stanisław Leszczyński was king of Poland in 1704-1709 and 1733-1736. 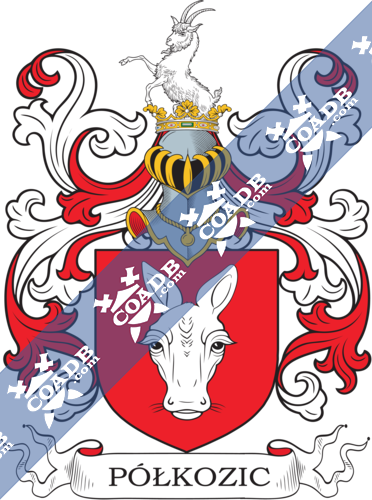 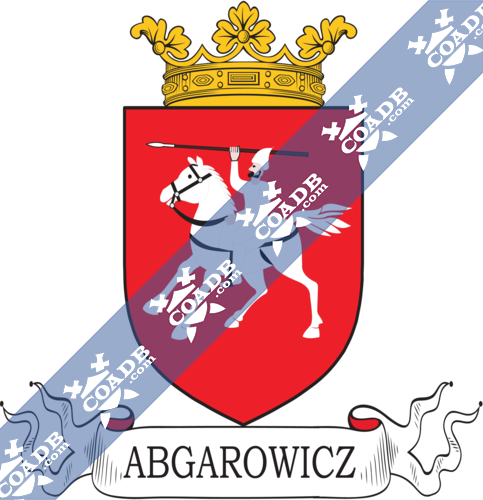