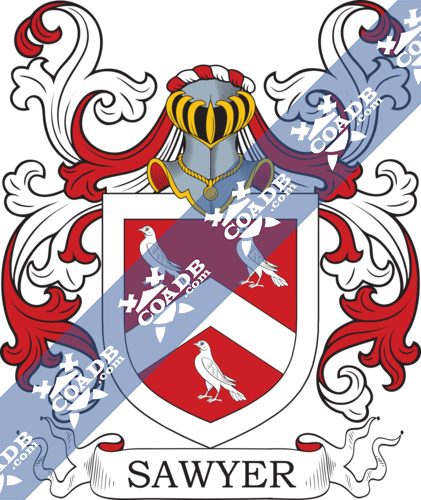 Sawyer Surname Name Meaning, Origin, History, & Etymology
This is an Anglo-Saxon occupational (or metonymic) last name meaning “the sawyer”, a person who saws wood or timber into logs or boards for a living, an important and critical occupation in medieval times and the Middle Ages. The name derives from the Middle English word saghier or saghen, meaning “to saw”. The Old English words were sagu and saghe. In some instances, it also may be an Americanized spelling of the surname Segar or other like-sounding Jewish surnames. Another theory is that this is a name of Norman origin, with a one Radulphus de Sahurs of Sahurs, Normandy, France recorded in 1198 AD, the name perhaps having come into England and the British Isles during the Norman Invasion of 1066 AD led by William the Conqueror.

Early Bearers of the Surname
One of the first documented bearers of this surname was Nicholas de Dagyere who was listed in the Records of the Abbey of Bec in 1248 AD in Berkshire, England. Humphrey le Sayhare who was listed in the Somerset Rolls in 1270 AD. The Hundred Rolls of 1273 AD, a census of Wales and England, known in Latin as Rotuli Hundredorum lists two bearers of this surname: Ralph le Sawiere (Huntingdon) and Geoffrey le Sawere (London). Henry le Sawer was recorded in the Close Rolls in 1280 AD.  Philip le Sagher was documented in Wakefield in the Yorkshire Rolls of 1324. John le Saghiere was recorded in the Sussex Rolls of 1327 AD. Kirby’s Quest lists one William Saweyer in county Somerset in 1327 AD. Richard le Saghiere was documented in the Close Rolls in 1347 AD. Henry le Saghier was documented in the Writs of Parliament. Walter le Sawyere was listed in the Caldendarium Rotulorum Originanlum. The Poll Tax of 1379 AD of Yorkshire lists two bearers: Hugo Sawer and Thomas Sawer. An early marriage involving this surname was Richard Sawyer to Jane Jessat at St. George’s Hanover Square in London, England in 1767, as well as France Sawer to Richard Meares at the same church. In Scitland, Alexander Sawer was a burgess (citizen) of the city of Glasgow in 1447 AD, Andrew Sauer was documented in Prestwick in 1470, Patrick Saware was documented in 1510 AD, David Sawar was an assize in Carrick in 1529 AD, and Thomas Sawar was a preacher in St. Andrews in 1545 AD. 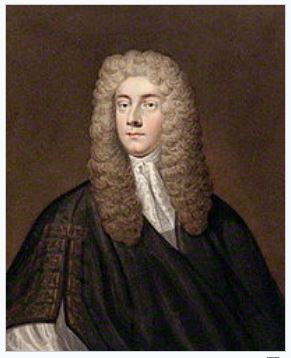 Sawyer of Heywood
The lineage or ancestry of this branch of the Sawyer family tree traces back to Edmund Sawyer, an Esquire of Cawston, Norfolk, England (in modern day United Kingdom once called Great Britain). He married Jane Fiske of Halesworth and had a son with her named George. George Saywer, Esq. who married Anne, daughter of Elezins Hill of Blodfield. Together, they had a son named Sir Edmund Sayer, a Knight who was born in 1579 AD. In 1627, he procured the manor of Heywood in Berkshite, and he also served as a member of Parliament for Berwick-upon-Tweed the next year. He married Anne, daughter of Sir William Whitmore of London, and had issue with her. His fourth son, Sir Robert Sawyer, was born in 1633 and was Attorney General to King Charles II of England and counsel to several Bishops during the reign of King James II. He had a son named George. George had issue including Edmund. This Edmund Sawyer was an Esquire of Heywood, who in 1860, married Mary, daughter of John Finch of Fiennes, and with her had five children: Sarah, Mary, Elizabeth, John, and George (born in Canon of Pyon in county Hereford, England and served as a Mahor in the Army). The son John was an Esquire of Heywood born in 1685. He married Anne, daughter of Anthony Duncombe, and had 13 children with her as follows: Anthony (his heir), Herbert (Admiral in the Royal Navy, married Anne Majendie of Lisbon, had a son named Sir Herbert), Charles, Susan Anne (married Charles Hope a Captain in the Royal Navy), Sophia, Louisa, Sarah (married Reverend James Thistlethwaite of Sunning Hill), Elizabeth, Jane, Anne, Harriet (married Captain Dansey of the Royal Navy), Mary (married Charles Jenner of Prebendary of Lincoln, Archdeadon of Huntingdon and Rector of Buckworth). He died in 1750 and was succeeded by his eldest son Anthony. This Anthony Sawyer was an Esquire of Heywood who was born in 1713. His second wife with Phoebe, daughter and co-heir of Richard Harcourt, was an Esquire of Wigsell, county Sussex, and was the father of the following six children: John (his successor), Richard (married Miss de Peter, a Dutch woman, and had a son with her named Richard John, and secondly married Mary Anne Shrapnell, having children with her named Henry Richard John and Phoebe), George (married Ms. Chappelen, a Dutch woman, had a son named George, and he secondly married Marianna), Mary (married William Bristow of Quiddenham), Anne (married Reverend Charles Smith), and Frances (married George Smith). 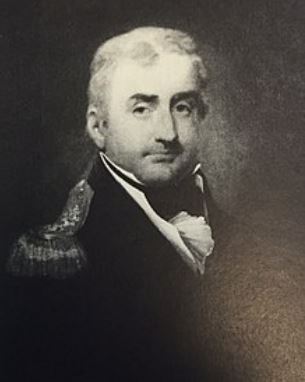 Early American and New World Settlers
William Sawyer was recorded as living in Virginia in February 1623 at “Plantacon over James Cittie”. He came aboard the Hopewell at the age of 18. Thomas Sawyer was recorded as living in Virginia in February 1623 at “At Warwick Squeake”. He came as a servant at the age of 23 around 1620. Records show both William and Thomas also had their last name spelled as Sawier. Other settlers in colonial America bearing this surname include Francis Sawyer (Virginia 1635) and Elizabeth Sawyer (Virginia 1700). In Canada, some first settlers bearing this last name included Michael Hyland Sawyer and Joseph Sawyer, who came in 1812 and 1831, respectively. In Australia, one of the earliest settlers bearing this surname was William Sawyer, a convict from Middlesex, England who came to New South Wales (then a penal colony) aboard the Asia in 1822. In 1840, a one Lavinia Sawyer came to the city of Adelaide aboard the Fairlee in 1840. In New Zealand, John and Mary Sawyer, age 24 and 27, respectively, came to the city of Wellington aboard the Aurora in 1840. In 1865, William Sawyer came to the city of Auckland aboard the Bombay. The name also made its way into the Caribbean. Margaret Sawyer owned 10 acres of land and 4 slaves in the parish of Christ Church, Barbados, in the year 1680. Elizabeth, daughter of Charles Sawyers, was baptized in St. George’s parish, Barbados in 1679.

Mottoes
I have identified one Sawyer family motto: Cherches et tu trouveras, which translates from French to English as “Seek and thou shalt find”.

Grantees
We have 5 coats of arms for the Sawyer surname depicted here. These 5 blazons are from Bernard Burke’s book The General Armory of England, Ireland, and Scotland, which was published in 1848. The bottom of this page contains the blazons, and in many instances contains some historical, geographical, and genealogical about where coat of arms was found and who bore it. People with this last name that bore an Sawyer Coat of Arms (or mistakenly called the Sawyer Family Crest)
1) Edmond Sawyer of Kettering, Northantshire, 8 May 1601, by Camden
2) Sir James Sawyer, M.D., of Green Oaks, Edgbaston, Birmingham, England, 1888
3) Anne, wife of Sir Edmond, daughter of Sir William Whitmore of London, confirmation of arms impaling Whitmore, Houghton, an escutcheon of pretense, 9 April 1627 by Segar and J. Philipott

Notables
There are hundreds of notable people with the Sawyer surname. This page will mention a handful. Famous people with this last name include: 1) Ada Lewis Sawyer (1892-1985) who was the first woman to pass the bar exam in Rhode Island, 2) Benair Clement Sawyer (1822-1908) who was the Mayor of Pittsburgh, Pennsylvania from 1862-1864, 3) Lila Diane Sawyer (1945) who is a famous TV news anchor who has been on ABC World News and Good Morning America, born in Glasgow, Kentucky, 4) Herbert Sawyer (1730-1789) who was an officer in the British Royal Navy who obtained the rank of Admiral, fighting in the American Revolution, Seven Years’ War, and the French Revolutionary Wars, 5) Philetus Sawyer (1816-1900) who was an American politician who was a Senator from Wisconsin from 1881 to 1893 and a member of the US House of Representatives from Wisconsin’s 6th district, from 1873 to 1875, born in Whiting, Vermont, 6) Thomas C. Sawyer (1945) who was an American politician born in Akron, Ohio who held numerous jobs including 58th Mayor of Akron from 1984-1986, member of the US House of Representatives from Ohio’s 14th district from 1987-2003, and a Member of the Ohio Senate from 2007-2016, 7) William Sawyer (1803-1877) who was a member of the US House of Representatives from Ohio from 1845 to 1849, 8) Frank Grant Sawyer (1918 to 1996) who was the 21st Governor of Nevada from 1959-1967, a Democrat and World War II Veteran, born in Twin Fall, Idaho, 9) Lee Thomas Sawyer who was an English professional football (soccer) player who was born in Leyton, London, having played from 2008-2016 for 12 different teams including Chelsea and Southend United, and 10) William Sawyer (1815-1904) who was a lumber merchant born in Sawyerville, Quebec who served in the Legislative Assembly of Quebec for Compton from 1871-1886.