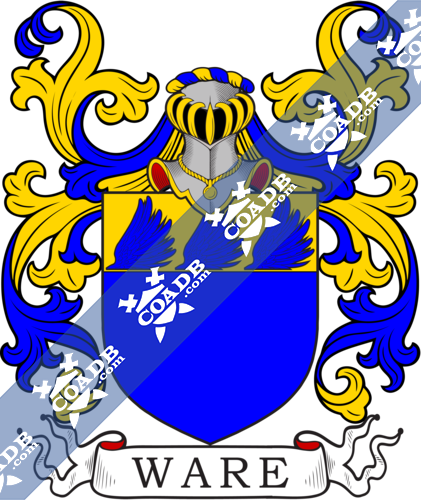 The surname of Ware is an ancient English name with two possible origins. The first of these origins is an Old English pre 7th Century word that developed from “Waer” which is a nickname used to describe a wary or prudent person. The first example of this is a person by the name of Peter le Ware who was named in the Church Rolls of 1218. However, this possible origin for the surname of Ware is noted as a rare origin, with only that one example. The second possible origin for the surname of Ware comes from a residential name, coming from a dam or a weir on an early fish farm, or in areas where “flash flocks” were used to enable trading boats to come and go. Those with this surname could possibly originate from the area of Ware in Hertfordshire, which had such a dam, and many locational name holders come from this area originally.

The first recorded spelling of the surname of Ware was in the year 1066, in the Domesday Register for the area of Hertfordshire. This person was named Anshil de Waras, and recorded and named under the reign of King William I, who was commonly referred to as “The Conqueror” and ruled from the year 1066 to the year 1087. Other mentions of this surname manifested with different spellings and based on the location and county of mention. Aschi Wara was noted and recorded in the 1086 Doomsday Register, and Pipe Rolls of the County Hertfordshire. John de Ware was recorded in Bedford in the year 1276, while William de la Ware was recorded in Surrey in the year 1194, and his name was most likely descriptive of the job he held at the time. In England, those who carried the surname of Ware are mainly found in the southwest part of England in the county of Devon. However, others who have the surname of Ware are found in the counties of London, Kent, Surrey, Hampshire, Yorkshire, Lancashire, Somerset, and into Wales in Glamorgan.

Those who bear the surname of Ware are found across the country of Scotland. High concentrations of these individuals are found in the counties of Roxburghshire, Midlothian, Lanarkshire, and Renfrewshire.

During the 17th Century, many European citizens began to emigrate to the United States of America. The US, or the New World, as it was called in that time, boasted freedoms that citizens had never before been afforded. The first person who bore the surname of Ware and stepped foot onto American soil was one Esaw DeLa Ware, who landed in the state of Virginia in the year 1623. Throughout history, it is possible that Esaw DeLa Ware wasn’t the first person with this surname to attempt the journey to the United States, he was just the first person with this surname who successfully made it to the New World. In the United States, those who bear the surname of Ware are most commonly found in the states od Texas, Mississippi, Alabama and Georgia.

James Hutchinson Ware (1941-2016) who was an American biostatician, and the former Professor of Biostatistics and Associate Dean for Clinical and Translational Science at the Harvard T.H. Chan School of Public Health

Mr. George Ware (died in 1917) who was an American signal man for US President 3 who died in the Halifax Explosion on December 6, 1917

Archie Vigil Ware (1918-1990) who was an African-American baseball first baseman who played from the year 1942 to the year 1952, and was a Negro League World Series Champion in the year 1945

Franklin Christenson “Chris” Ware (born in 1967) who is an American comic book artist and cartoonist, who won the Eisner Award and the Harvey Award on more than one occasion

1) (co. Devon). Or, two lions pass. az. on a border of the second eight escallops of the first. Crest—A dragon’s head or, pierced through the neck with a broken sword blade ppr.
2) Gu. a lion pass. ar. an orle of eight crosses crosslet or. Crest—A boar pass. or.
3) (Poslingford, co. Suffolk, and Hendon Hall, co. Middlesex). Per pale ar. and gu. two lions pass, within an orle of roses and escallops all counterchanged. Crest—In front of two spears in saltire ppr. a dragon’s head gu. gorged with a collar gemel ar. Motto—Deo favente.
4) (Sir James Ware, Auditor of the Revenue In Ireland temp. Charles I., d. 14 May, 1632 ; Fun. Ent. Ulster’s Office; arms certified by Roberts, Ulster, 1645). Or, two lions pass. az. armed and langued gu. a border of the second semee of escallops. Crest—A dragon’s head or, pierced through with the shiver of a lance ppr.
5) (Dublin; granted by Molyneux, Ulster, 1604; Reg. Ulster’s Office). Az. on a chief or, three sinister wings erect of the first.
6) (Reg. Ulster’s Office). Gu. a lion ramp. ar. armed and langued az. debruised by a bendlet sa.
7) (co. York, formerly of Edinburgh; exemplified to Samuel Hibbert, M.D., eldest son of Samuel Hibbert, Esq., by Sarah, his wife, dau. and eventual sole heiress of Robert Ware, Esq., on his assuming, by royal licence, 1837, the name and arms of Ware, in lieu of Hibbert). Quarterly, 1st and 4th, or, two lions pass. az. armed and Iangued gu. on a border of the second twelve escallops of the first, for Ware; 2nd and 3rd, barry of eight or and vert a pale counterchanged, for Hibbert. Crests—1st, Ware: A dragon’s head couped or, pierced through with a shiver of a lance ppr.; 2nd, Hibbert: A cubic arm erect, grasping a millrind all ppr. 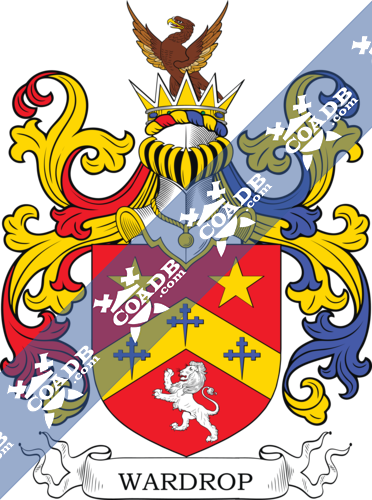 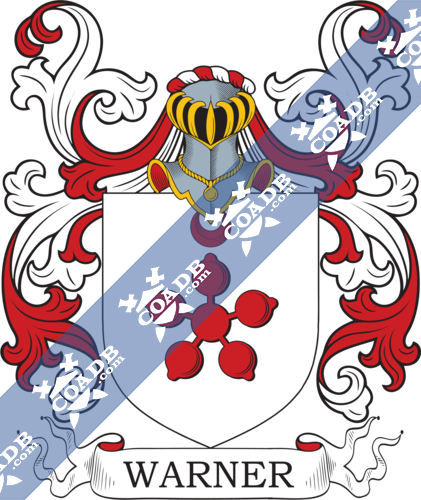