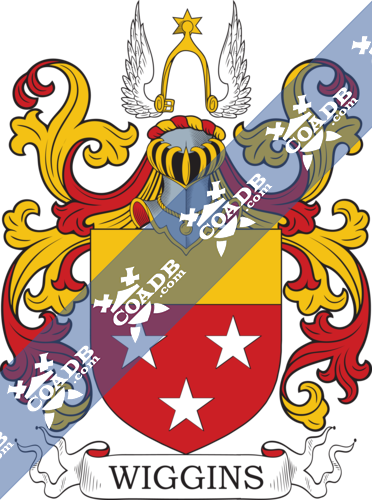 Meaning, Origin, Etymology
The Olde English surname of Wiggan has two origins that it may have been derived from the first being the name of an ancestor such as “the son of Wigand”, “Wigant” meaning ‘warrior’ from the verb of “Wigan” meaning to fight, the second being from the the Breton personal name of “Wincon or Uuicon” meaning ‘worthy’, ‘high’ or ‘noble’.  The Wiggans immigrants to America arrived from many locations including Ireland, England, Great Britain, Scotland, Canada and Germany. There were over 700 Wiggans that served in the Civil War and over 700 that served in the American Revolution. Only a few are listed below. There was a ferry that was used to cross the Mississippi River at St. Louis before there were any bridges built and it was owned and operated by a Mr. Wiggins.  Most pioneers that headed west had most likely used Mr. Wiggins ferry to cross at St. Louis. There was another Mr. Wiggins that was one of the first settlers and helped establish Denver, Colorado. He was a guide for wagon trains. Also it is possible that the Wiggins families of America may have been some of the first people to settle North Carolina and may have been originally from Virginia.

History, Genealogy & Ancestry
HERRINGSHAW’S CITY BLUE BOOK OF BIOGRAPHY: NEW YORKERS OF 1917: TEN THOUSAND BIOGRAPHIES
WIGGIN, ALBERT HENRY, banker, was born Feb. 21, 1868 in Medfield, Mass. He is president of the Chase National bank; director of the National Bank of Commerce, Liberty National bank, Astor Trust company, and numerous other corporations.
WIGGIN, FREDERICK HOLME, physician, surgeon and gynecologist of 55 West Thirty-sixth St., was born Dec. 26, 1853, in England.  Since 1892 he has been visiting surgeon to the New York hospital.
WIGGIN, MRS. KATE DOUGLAS, author of 143 West Fifty-eighth St., was born Sept. 28, 1857, in Philadelphia, PA.  She is the author of A Summer in a Canon; Susanna and Sue; Rebecca of Sunnybrook Farm, a play; and other works.
WIGGINS, CARLETON, painter and artist of 1079 Dean St., Brooklyn was born on March 4, 1848 in Turners, N.Y.   His best known works are Morning on the Hills; The Wanderers; Ploughing in France; and After Wind-Rain.
WIGGINS, GUY CARLETON, artist of 15 West Sixty-seventh st., was born Feb. 23, 1883 in Brooklyn, N.Y.  He has exhibited at the National Academy, Pennsylvania Academy, Chicago Art Institute; and other galleries.

SEVEN HUNDRED ANCESTORS PG. 133 CH. L WIGGINS
Wiggins is a Frankish name brought to England by the Normans.  It is on record as early as 1273 in Essex and Norfolk Counties.  A John Wiggins came to the colonies in 1656 and settled in Southold, New York. From there his descendants multiplied and spread to the west.  A Thomas Wiggins lived in Hampshire County, Virginia. His will with a date of Aug. 6, 1776 was probated there on Feb. 12, 1778. His children all born in Hampshire County were Archibold born 1744, Thomas, Comfort Sabbaret, Chris and Philip.  The will of Philip Wiggins was dated July 17, 1820 in Harrison County, Kentucky. His children were Mary Chambers, Hannah Williams, Sarah Martin, Christen Martin, Rachel Osborn, Drusella Homes, Rutha Kernes, Elender Reeves and James Harvey. Archibold Wiggins, born in 1744, married Mary Flint of Flynt.  She was born in Hampshire County, Virginia on Jan. 18, 1748 and lived to be 99 years old. She died in Harrison County on Oct. 13, 1847 and is buried in the Mt. Zion Cemetery near Oddville, Kentucky. Her husband, Archibold lived to the age of 73 and died in Mason County on Feb. 22, 1817. He is buried in the Shannon Cemetery, northeast of Mt. Olivet, Kentucky.   His will was made on Apr. 4, 1812 and is recorded in Mason County. The children of Archibold and Mary Wiggins were Freelove, Joseph, Thomas, Philip, Archibold, Benjamin F., Enoch, John, Matilda, Charity and Frances. Some sources claim that Benjamin F. and Enoch may not have been their sons. After a great deal of research and accumulation of voluminous material regarding the preceding Wiggins’ lineage we are reasonably certain that we are connected to it but have not been able to establish a definitive link.  However, we have trace our ancestry back to our great great great grandfather, John Wiggins, who was born before 1765 and appears in the Mason County census for 1800 and the Nicholas County, Kentucky census for 1810 and 1820. His will dated Aug. 9, 1824 in Nicholas County bequeathed to his wife, Sally, his plantation, three negro slaves, Gilbura, George, and Agg and all his stock and household furniture with the proviso that at her death everything be divided equally between his two sons, William and Archibold.  The will was probated in 1828. Archibold was born in Nicholas County in 1796 although the 1800 census shows his father living in Mason County. He died May 9, 1855. William was born in 1782. He is shown in the Nicholas County Census for 1810, 1820, 1830, 1840 and 1850. On Jan 21, 1810 he married Elizabeth A. the daughter of Nathaniel Wells. She was born in Kentucky about 1794. The will of William Wiggins was made in Nicholas County on Sept. 23, 1858 and probated in Oct. 1863. He bequeathed $50.00 to his daughter, Ruth Claypole, $100.00 to his daughter Malinda Mullikin, $100 to his daughter Jane Wood and $250.00 and one negro girl named Elizabeth to his son Franklin V.  The balance of his estate “both real and personal the land and negroes to be hers (his wife Elizabeth) during her natural life”. After her death the real estate and negroes were to go to his son. Ruth Wiggins was born Oct. 11, 1811 in Kentucky, probably Nicholas County. On June 25, 1829 she was married in Nicholas County to John, the son of Jonathan and Hannah Doan Claypoole. After 1850 the couple moved to Vermillion County, Illinois and are buried there in the Walnut Corners Cemetery.

Mottoes
To thine own self be true.