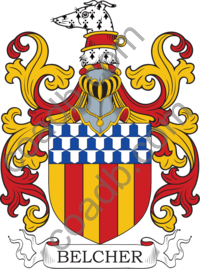 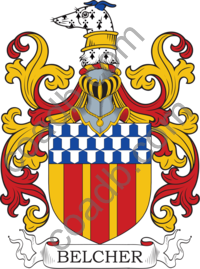 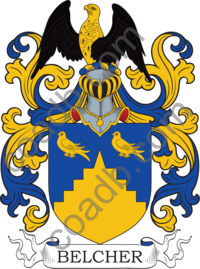 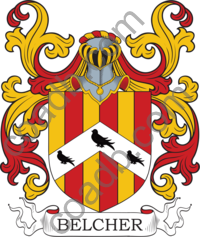 Origin, Meaning & Etymology
Belcher is a surname of Norman origin that developed from a nickname from the Old French beu or bel, meaning “fair” or “lovely”, and chere, meaning, referring to a person with a cheerful disposition, or perhaps a person who was good looking, or perhaps even a person who is good company.

Several alternate origin theories exist. One is is offered by Charles W.E. Bardsley in his book A Dictionary of English and Welsh Surnames: “This surname is derived from a nickname. ‘belsire,’ grandfather, or perhaps belchtre, good friend; compare Bellamy, Bowsher, and Bonamy”. Another is offered by Eric Rosenthal, in his book South African Surnames, believes the name means “rough-voiced” in Old English. Lastly, Henry Barber in his book British Family Names, states the name derives from Bellecourt, a location in Normandy near Perrone. To be clear, the name has no connection to the act of belching or burping.

History & Early Bearers
The surname is spelled Bellesur in the Roll of the Battel Abbey, a commemorative list of the companions of William the Conqueror. The Bellesur, or Belesur, mentioned in the roll is believed to have come from Bellais, near Paris, France.

Some of the earliest known bearers of the surname were Thomas Belcher (recorded in the Assize Court Rolls of Yorkshire in 1219 AD) and Richard Belecher (documented in the Hundred Rolls of Gloucestershire in 1275 AD.

William Belcher (c. 1534-1590), the son of Edmund Belcher and Emma Wryley, inherited the Guilsborough estate from his brother Alexander. He married married Elizabeth Randes and had the following children with her: Gregory, Edmund, Jane, William, Robert, and Henry.

William Belcher Sr. was the rector of Ulcome from 1643-1662. He bore the arms of the Guilsford branch. He married Damaris Wilson and had issue with her. A memorial to the family exists in the All Saints Church, located in Ulcombe, Kent, England. Part of the inscription reads: “In his private character he was no less admired as a tender husband, an indulgent parent, an affectionate relation, and a ready friend and neighbor. In general his address was engaging behavior courteous and conversation instructive. Few men have been more valuable in their station and more esteemed in their life.”

Jonathan Belcher (1681-1757) was the son of a tavern owner in Massachusetts, and the grandson of a Belcher who immigrated to Massachusetts Bay from England. He attended Harvard College and was a merchant, eventually serving as the Governor of Massachusetts Bay from 1730-1741, and as Governor of New Hampshire. He married Mary, daughter of Lieutenant Governor William Partridge, and had three children with her). His youngest son, Jonathan Belcher, was appointed as Chief Justice of the Nova Scotia Supreme Court and as Lieutenant Governor of Nova Scotia.

1) (William Belcher, of Guilsborough, co. Northampton, fourth in descent from Hugh Belches, co. Stafford, Her. Vis.). (Staffordshire and Warwickshire). (registered to James Belchek, secretary to the Lords Justices of Ireland, 1724, Motto—Loyal au mort). (Roehampton, co. Surrey). Paly of six or and gu. a chief vair. Crest—A greyhound’s head erm. gorged with a collar gu. rimmed and ringed or.
2) Or, three pallets gu. a chief vair. Crest—A greyhound’s head erased erm. collared or, eared az.
3) (Northamptonshire). Per chev. indented az. and or, in chief two martlets of the second. Crest—A demi hawk or, with wings expanded sa.
4) Paly of six or and gu. on a chev. ar. three martlets sa.