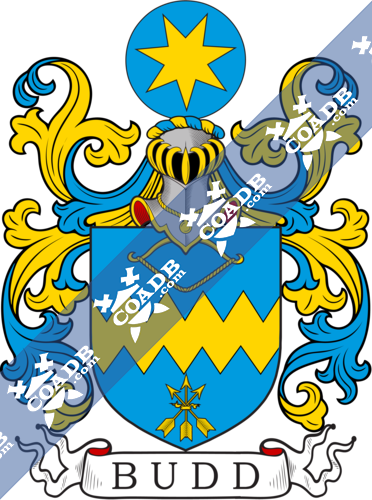 Origins of Budd:
This old and intriguing name is of Anglo-Saxon origin, and acquires from the Old English particular name or byname, “Budda”.  There is some confusion about the original meaning of the name.  It may reflect the use of the Old English pre 7th century “budde”, bud, swelling, as a nickname for a plump or thickset person, or it may also have used as a nickname for someone with some fancied similarity to a beetle, from the Old English “budda”, beetle.  The first record, below, is strictly speaking that of a byname, and the entry represents the person as being “so called because of his thickness”.  The personal name Budda shows in some English place names, such as Budbrooke, in Warwickshire, and Budworth in Cheshire, and has created a variety of derivative surnames, among them the diminutive form’s, Budcock, and the patronymics Budds and Budding.  The wedding of one Bartholomew Budd and Mary Smyth noted at St. Andrew by the Wardrobe, in London, in February 1573.

England:
The surname Budd first appeared in Cornwall, where they held a family seat from very early times, some say before the Norman Invasion in 1066 AD. The very first recording spelling of the family was shown to be that of Brihtmerus Budde, dated 1025, in the Record of Old English By names. It was during the reign of King Cantue, dated 1016-1035.  Surname all over the country became a necessity with the introduction of personal taxation.  It came to be known as Poll Tax in England.  Surnames all over the country began to develop with unique and shocking spelling varieties of the original one.

Notes: (Willesley, co. Devon). Blazon: Azure a fesse dancette, in chief a bow bent in fesse, and three arrows, two in saltire and one in pale, tied with a ribbon in base, all or. Crest—A hurt charged with a star of seven points or. 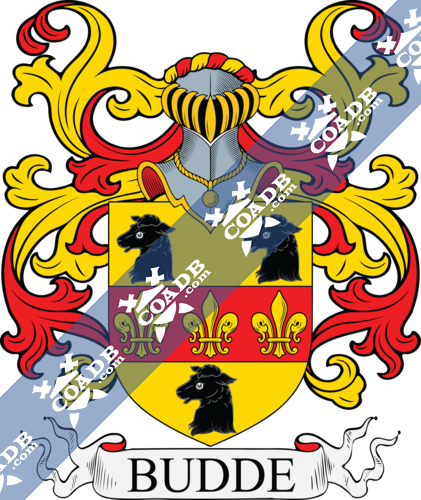