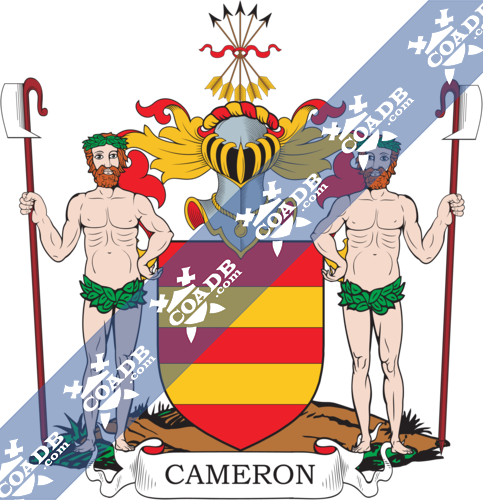 The surname of Cameron is of a Scottish origin, and has two possible origins from which it derives. The first of these possible origins for the surname of Cameron is that it comes from the Ancient Gaelic word of “cam”. There are various translations for this word, one of which can be translated to mean “crooked”. It could also mean “bent”. The component of “sron” is placed onto the end which can be translated to mean “nose.” Thus the bearer of this surname was most likely one who had a crooked nose, and was given this nickname. When nicknames became adopted as surnames, they most often had to do with the characteristics of the original bearer, such as their physical characteristics, moral attributes, or in some cases, their manner of dress and habits. The second possible origin of the surname of Cameron was that it is a locational surname from any of the places in the Lowlands named Cameron. This means that the surname was often taken by the Lord or owner of the land from which the name derives. Others who may have taken a locational surname are people who have migrated out of the area to seek out work. The easiest way to identify someone who was a stranger at that time was by the name of their birthplace. All of these places that the surname of Cameron is attached to derive from the Gaelic “Cambrun” which comes from “cam” which can be translated to mean “crooked” “bent” plus the element of “brun” which can be translated to mean “hill.”

In England, those who bear this surname of Cameron can be found in the counties of Northumberland, Durham, Yorkshire, Lancashire and Cheshire.

Throughout the 17th Century, a period of time known as the European Migration began throughout Europe, though mostly centered in England. This migration was when the settlers determined that they no longer were happy with their homeland, and sought out a new place to live, one promising new freedoms and capabilities that were not afforded to them in the land of their birth. The United States of America, which at that time was called The New World or The Colonies, promised these freedoms to new settlers, and thus was a popular destination during this time for those settlers. Those who have the surname of Cameron can be found in Massachusetts, Michigan, Ohio, Pennsylvania, New York, California, Missouri, Oregon, Washington, New Jersey and Tennessee.

Here is the population distribution of the last name Cameron:

George J. Cameron, who was a Delegate to the Republican National Convention from Oregon in the year 1916, and was a Republican politician from America

George W. Cameron, who was a Delegate to the Republican National Convention from Maryland in the year 1916, and was a Republican politician from America

Gordon K. Cameron, who was a Member of the New York State Assembly in the 96th District Court. He was a Democratic politician from America from the year 1967 – 1969.

H. Eugene Cameron, who was the Burgess of Kingston, Pennsylvania from the year 1933 to the year 1935, and was a politician from America

Helen Cameron, who was the Alternate Delegate to the Republican National Convention from New Mexico in the year 1960, and was a Republican politician from America

1) (Lochiel, chief of the clan Cameron: arms given as recorded, 1795). Gu. two bars or. Crest—A sheaf of five arrows tied with a band gu. Supporters—Two savages wreathed head and middle with oak, each holding in his exterior hand a Lochaber axe ppr.
2) (Fassifern, co. Argyll, bart., 1817). Mottoes—Over the first crest: Arriverette; over the second: Pro rege et patria; under the arms: Maya. Gu. three bars or, on a bend erm. a sphinx betw. the Badge of the Portuguese Order of the Tower and Sword and the Gold Medal presented to Col. Cameron by the Grand Seignieur, on a chief embattled a representation of the town of Aire, in France, all ppr. Crest—1st: (of honourable augmentation, granted to Col. Cameron, 20 May, 1815) A demi Highlander of the 92nd regiment, wading through water, holding in the dexter hand a sword, and in the sinister a banner, thereon the number “92” within a wreath of laurel; 2nd: Out of a mural crown or, a dexter arm embowed in armour, the hand grasping a sword, all ppr. Supporters—On either side a Highlander, in the uniform of the 92nd regiment, holding in the exterior hand a musket all ppr.
3) (Lakefield, co. Inverness). Motto—Pro rege et patria. Ar. three bars gu. within a bordure engr. az. Crest—A dexter hand grasping a sword ppr.
4) (Worcester; borne by the descendants of Thomas Cameron, M.D., of Worcester, d. 1777, son of Rev. John Cameron, Minister of Callendar, N.B., claiming descent from Lochiel). Ar. three bars gu. a border az. Crest—A dexter arm in armour embowed grasping a sword all ppr. 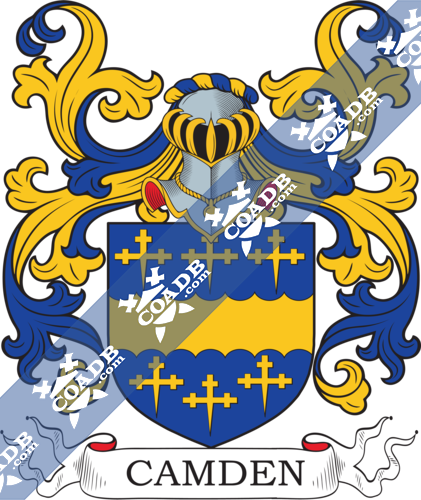 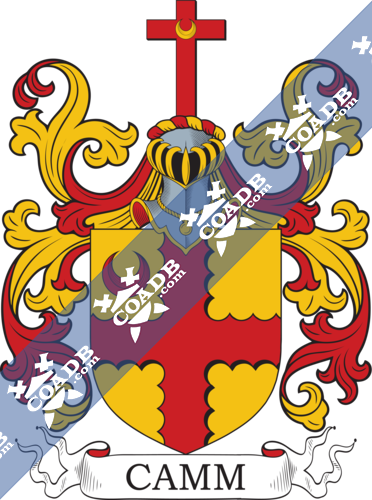