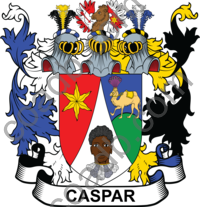 The Polish Caspar surname is of patronymic origin. It is a surname that formed from the first name of the father of the original bearer of the name.  The Christian name Kaspar is of Old Germanic origin, acquiring from the Persian word for Treasurer." More common variations are: Caspari, Caspary, Caspare, Casapar, Casparo, Cuaspar, Caspara, Caspair, Caspaur, Casparie.

The surname Caspar first found in Polesie, the largest county of Poland.  It inhabited by Ruthenians, called Polesians, of Ukrainian descent.  The main towns are those of Brest Litovsk, Pinsk, Kobryn, Kamenets, Litovsk, and Luninets.

Success! JPG added to your cart.
×