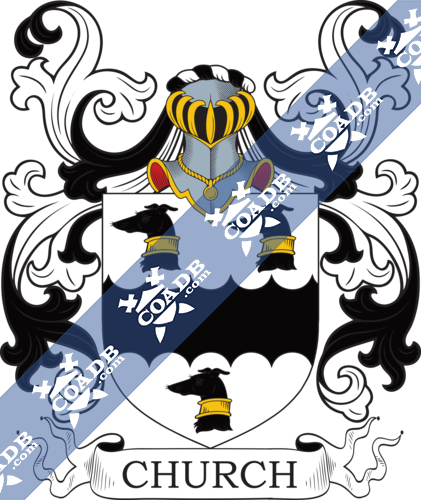 Church Surname Name Meaning, Origin, History, & Etymology
This last name developed as an English topographic name denoting a person who lived near a church, derived from the Old English word cyrice, and ultimately from the Greek kyriakon meaning “house of the Lord”. It is also possible this was an occupational surname for a person who was an official of some sort that worked in a church. William Arthur, in his 1857 book titled An Etymological Dictionary of Family and Christian Names, states the following regarding this name: “A house of Christian worship, derived from the old English chirch, and Scottish Kirk, Latin circus, and this from the Gaelic cearcal, a temple, a round building. The root of Church is from the Gaelic car, roundness, from which we have cirke or kirke”. The name also made its way into Ireland where they settled in Ulster in the 1600s AD, and in Munster, where it may have been changed to Aglish or Eaglais. In some cases, it’s an Anglicization or Americanization of the German surname Kirch.

It is important to note how pivotal a role churches and monasteries played in the community in medieval times and the Middle Ages. The church plated an important role in affairs of the state and politics as well. Its holidays also gave shape the calendar, as its rituals marked significant moments in a person’s life (ex. baptism, confirmation, marriage, last rites).

a medieval church in England

Church Family Mottos
I have identified three family mottos for the Church family and have translated them into English as follows:
1) Virtute (By virtue)
2) Vulnera ecclesiae liberorum vita
3) Virtus triumphat (Virtue triumphs)

In his 1890 book, Homes of Family Names in Great Britain, Henry Brougham Guppy, states the following in regard to this last name: “In the 16th century the family of Church or Churche held the manor of Woodham – Mortimer; and in the 17th century, Mr. William Church owned part of the Arnolds estate in Lamborn parish”. 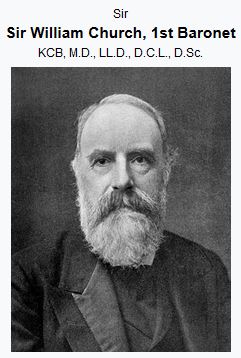 Baronet Church
The genealogy of this branch of the Church family tree begins with John Church, of Woodside, Hatfield, and Belshill, county Northumberland, son of Thomas of Nazeing, Essex, who was born in 1785. He was a Justice of the Peace and Deputy Lieutenant. In 1826, he married Isabella, daughter of George Selby of Beal and Twizel. He was the father of two sons and two daughters. His younger son, Sir William Selby Church, 1st Baronet, K.C.B, B.A., and M.D. Oxon, was born in 1837. He was the President of the Royal College of Physicians from 1899-1905. He was created a Baronet in 1901. In 1875, he married Sybil Constance, daughter of Charles John Biggie of Linden, and had issue with her as follows: 1) John William (B.A. from Oxford, Barrister-at-Law, Inner Temple, Captain of the Hertsfordshire Regiment, married Brenda Pattinson, had issue named Margaret Sybil, Barbara Brenda, Anna Isabella, Lesbia Mary), 2) Geoffrey Selby (discussed below), and 3) Ursula Nina. He died in 1928 and was succeeded by his son Geoffrey. Sir Geoffrey Selby Church, 2nd Baronet, was born in 1887. He was a Justice of the Peace, Deputy Lieutenant, High Sheriff, and Colonel in the Royal Army who served in World War I and II. He also was educated at Oxford. He married his second wife, Helene Elizabeth, daughter of John L. Traynor of Michigan, United States. The Church coat of arms is blazoned in the medieval European art of heraldry as follows: Or on a fesse engrailed sable, between three greyhounds’ heads of the second erased gules and collared azure, as many bezants. Crest: A greyhound’s head sable, erased gules, collared azure and charged with two bezants. Motto: Mea spes est in Deo. They resided at St. Michael’s, Hatfield, Hertsfordshire, England.

John At Church
John At Church was born in Great Parndom Parish, Manor of Geround, county Essex, England in 1335 AD. In 1360, married Catherine Winchester and had two sons with her: Robert and John. His son, John Church II or John Chyrch II, was born in Leicester, England c. 1365 AD. He had two issue: Catherine and John. His son, John III, was born in the same town c. 1420 AD. He married a woman named Agnes and had a son with her named John. John IV was born in Leicestershire, England in 1455 AD. He had a son named Reynold. Reynold Church was born in Castle Camps, Cambridgeshire, England in 1474 AD. He married Margaret, daughter of Robert Greene and Margaret Chester, and three sons with her: Robert, John, and William. His son Robert Church was born in Castle Camp, Cambridgeshire c. 1505 AD. In 1524, he married Joan Henkyn, and had three sons with her: Bartholomew, John Corant, and Thomas. His son, John Corant Church I was born in the same town in 1525 AD. In 1547, he married Catherine Swan, and had three issue with her: John Corant Church II, Elizabeth, and Thomas.

Richard Church of Plymouth Colony
Richard Church was born in England c. 1608 AD. He was a carpenter by trade. He came over to Plymouth, Massachusetts, Colonial America around 1630 with The Winthrop Fleet, as a servant of Mr. Richard Webb. In 1636-1637, he married Elizabeth, daughter of Mayflower Passenger Richard Warren. He was the father of the following children: Elizabeth, Elizabeth, Joseph, Richard Jr., Colonel Benjamin, Nathaniel I, Charles, Priscilla, Hannah, Caleb, Lydia, Mary, Deborah, Sarah, and Abigail. Four of his sons are discussed as follows:
1) Joseph Church was born in Hingham, Plymouth, Massachusetts c. 1637 AD. He married Mary, daughter of John Tucker, and had issue with her as follows before his 1711 death in Rhode Island: Joseph, Elizabeth, Mary, John, Deborah, Alice, Benjamin, Sarah, William, and Abigail.
2) Benjamin Church, Esquire, was born in Plymouth Colony, Massachusetts c. 1639 AD. He was a prominent leader in King’ Philip’s War. He is considered the father of the Army Rangers. His memoirs “Entertaining Passages relating to Philip’s War” were published in 1716 and are considered the first American military manual. He married Alice, daughter of Constant Southworth and Elizabeth Collier, and had issue with her as follows: Elizabeth, Captain Thomas Esq., Benjamin, Edward, Colonel Charles, Elizabeth, Sampson, Nathaniel, Constant, Martha, Catherine, Sarah, Alice, and Alice Mary.
3) Nathaniel Church I was born in Plymouth, Massachusetts c. 1640. He married Sarah, daughter of William Barstow and Hannah Hubbard, and had issue with her as follows: Joseph, Richard, Nathaniel, Charles, Alice, and Sarah.
4) Caleb Church was born in Plymouth, Massachusetts c. 1640. He married three times: Joanna Sprague, Deborah, and Rebecca. He was the father of the following children: Richard, Hannah, Ruth, Lydia, Caleb, Joshua, Isaac, Abigail, and Rebecca

Notables
There are hundreds of notable people with the Church surname. This page will mention a handful. Famous people with this last name include:
1) Dr. Benjamin Church (1734-1778)was the first Surgeon General of the United States Army and was also active in the Sons of Liberty movement in Boston leading up to the American Revolution, but was tried and convicted for sending secret information to British General Thomas Gage
2) Benjamin Church (c. 1639-1718) was an English colonist in North America who was a military leader of the prececessor of the United States Army Rangers, becoming Captain of the first Ranger force in 1676, having fought in King Philip’s War, King William’s War, and Queen Anne’s War, born in Plymouth Colony
3) Vice Admiral Albert Thomas Church III (1947) was born in Newport, Rhode Island, known for assembling a team to investigate the detainee incidents at Abu Ghraib prison during the Iraq War
4) Benjamin F. Church (1807-1887) who was an early settler and prominent settler in Milwaukee, Wisconsin, born in New Paltz, New York
5) Brad Church (1796) was a professional ice hockey player who played in the NFL and ECHL from 1996-2006, for teams such as the Washington Capitals and Portland Pirates, born in Dauphin, Manitoba, Canada
6)  Charlotte Maria Church (1986), whose birth surname was Reed, is a Welsh singer-songwriter and actress, born in Llandaff, Cardiff
7) Frank Forrester Church III (1924-1984) was a US Senator for Idaho from 1957-1981, born in Boise, having graduated from Harvard and Stanford, having also served in World War II
8) George McDonald Church (1954) is an American chemist, molecular engineer, and geneticist, known for founding the Personal Genome Project, born in MacDill Air Force Base, Florida
9) Ellen Church (1904-1965) was the first female flight attendant, born in Cresco, Iowa, and served in the Army Nurse Corps during World War II
10) George William Church Sr. (1903-1956) who was the founder of Church’s Chicken, born in Wise, Virginia
11) Ryan Matthew Church (1978) was a former baseball player in the MLB who played for five different teams from 2004-2010, including the Montreal Expos and New York Mets, born in Santa Barbara, California
12) William Church (c. 1778-1863) was an American who invented the typesetting machine in 1822

1) or Churche – (Earls Colne, co. Essex). Gu. a fesse or, in chief three sinister gauntlets ppr. Crest—An arm erect in armour ppr. garnished or, holding a baton of the last.
2) or Churche – (borne by Henry Church, Esq., R.N., and Rev. William Church, of Hampton, co. Middlesex). Gu. a crosier reversed in bend sinister, surmounted by a sword in bend dexter ppr. on a chief ar. a thistle leaved also ppr. Crest—A hand holding a sword erect betw. two branches of laurel, entwined round the blade, all ppr. Over the crest the word—Virtute.
3) (granted 1822 to Sir Richard Church, C.B., K.H., &c.). Az. a lion ramp. or, over all on a bend erm. three dexter gauntlets clenche ppr. Crest—A demi lion ramp. or brandishing in his dexter paw a battle-axe ppr. and resting his sinister paw on a cross gu.
4) (Ffrwdgrech, St. David’s, co. Brecon, exemplified to Samuel Church Philips, Esq., on his assuming the name of Church, instead of Philips, by royal licence, dated 6 May, 1869). Quarterly, 1st and 4th, ar. on a pile gu. a chev. of the field charged with three roses of the second barbed and seeded ppr. betw. as many greyhounds’ heads erased of the first, for Church; 2nd and 3rd, sa. a lion ramp. betw. four mascles saltirewise or, for Phillips. Crests—1st, Church: In front of a passion cross gu. a pelican in her piety ar. the wing charged with a rose also gu. barbed and seeded ppr.; 2nd, Philips: A lion ramp, reguard. sa. semi of pheons, and holding betw. the paws a mascle or. Motto—Vulnera ecclesiae liberorum vita.
5) (Tunstall, co. Salop, 1747). Ar. a fesse engr. betw. three greyhounds’ heads erased sa. collared or.
6) (Slingfield, co. Sussex). Chequy ar. and sa. on a bend gu. three lions’ heads erased or. Crest—A tiger pass. ar. tufted and maned or. 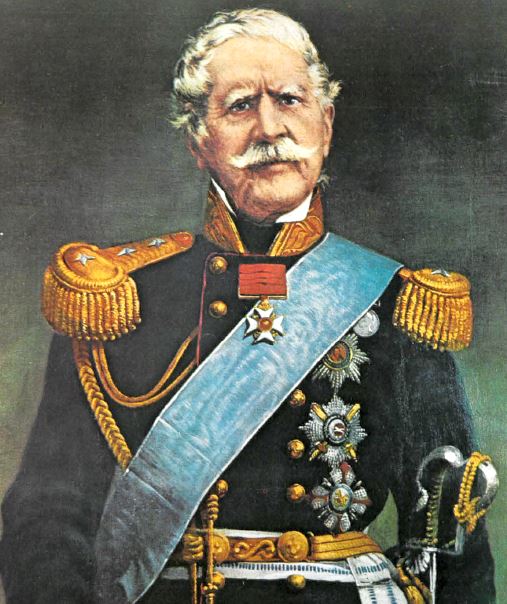 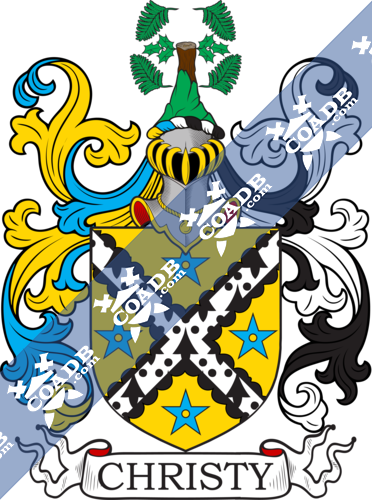 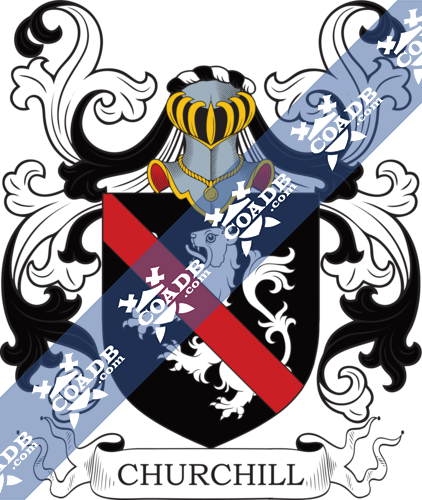