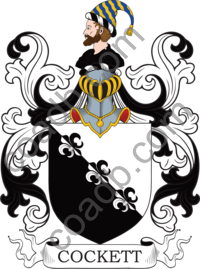 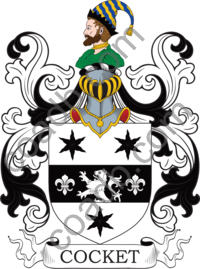 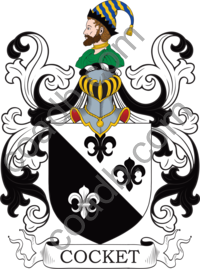 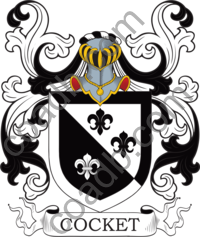 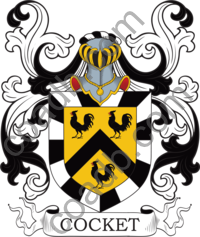 We don't yet have this section of research completed for this name. If you are interested in being notified when research becomes available, please use this form to contact us and we will let you know as soon as we have something!

1) (Hadsor and Droitwich, co. Worcester, formerly of Ampton, co. Suffolk: the Worcester property came to the family by the marriage of Edward Cockett, with Anne, dau. and co-heiress of Thomas Froxmore. Visit. Worcester, 1634). - Per bend ar. and sa. three fleurs-de-lis in bend counterchanged. Crest—A man's hand in profile couped below the shoulders ppr. on the head upon a wreath ar. and sa. a cap bendy wavy or and az.. Source: Burke's
2) (co. Hertford). - Ar. on a fesse betw. three estoiles a demi lion ramp. betw. two fleurs-de-lis sa. Crest—A man’s head, couped below the shoulders and sidefaced ppr. habited vert, the collar or, on the head a cap bendy wavy of the last and az. turned up, indented sa. Source: Burke's
3) (cos. Norfolk and Suffolk). - Per bend ar. and sa. three fleur-de-lis counterchanged. Crest—As the last. Source: Burke's
4) (Hampton, co. Suffolk). - Same Arms, within a border also counterchanged. Source: Burke's
5) None - Or, a chev. betw. three cocks sa. armed gu. within a bordure gobonated ar. and of the second. Source: Burke's

Michael COCKETT commented on 24-Jul-2018
Thanks for your email much appreciated. I don't think there should be a knight's helm and feathering for these 5 Coket/Cockett coat-of arms. There has only been one knighted person found in Coket ancestry and that was Sir Edward Cockett who died 1626. His 12 shielded arms (showing his Welsh maternal ancestry) are on display in St Mary's, church, Langley Marish, Bucks. He had no male issue, but he displays a CREST of a MOORS head, which may indicate some previous ancestor (perhaps the missing knight?) in a crusade perhaps (not found) There is a 'JOHN COKET'S CHANTRY at Ampton, Suffolk with the COKET coat-of-arms displayed in that chapel dated 1479. It is similar to your #1 presentation but the Fleur-de-Lys are vertical and not laying along the 'bend'.Yours is a copy of that supplied by 'wallofnames' and that was incorrect as well as they showed the fleur-de-lys in one colour, and to any one who knows anything about heraldry, that is impossible. Armorial #5 is c1440 and is for the marriage of an Ampton COKET daughter as follows: Croftes of Saxham: (Visitations of Suffolk 1577) John Croftes married ---- (Joan) dau of JOHN COKETT of Ampton (c1440) Arms: ‘Argent a chevron between three cocks Sable, a bordure gobony Or and of the first’. (I believe the gobonated border shown here indicates a variation for daughter and the main COKET arms at that time could well be as you show, but no evidence has been yet found to verify this) On pages 187-8: Additional pedigrees: COKETT of Ampton: Arms quarterly 1 and 4: ‘Argent on a fess between three estoiles Sable a demi-lion rampant between two fleur-de-lys of the field’ (Edward Cokett) 2 and 3 ‘Sable, a griffin sergeant between three cross-crosslets fitchee Argent within a bordure Or’ (Froxmere) guestidated 1500-1510 I don't know where you obtained armorials #3 and #4 from, for I don't believe they are correct. Please advise the source. Please note my new email address. Mike Cockett This is a mystery for I have three armorial designs for EDWARD and he is unique in being the alledged eldest son NOT named after his parents JOHN which had been in the COKET family for several generations. He reverts back to the three fleur-de-lys design at a latter date, but his son, Anthony and grandson Arthur bore design #2 but without the helm, crest and feathering. Would be pleased to hear of any more COKET/COCKET/COCKETT family history Best wishes Mike Cockett
Share with:
Success! JPG added to your cart.
×