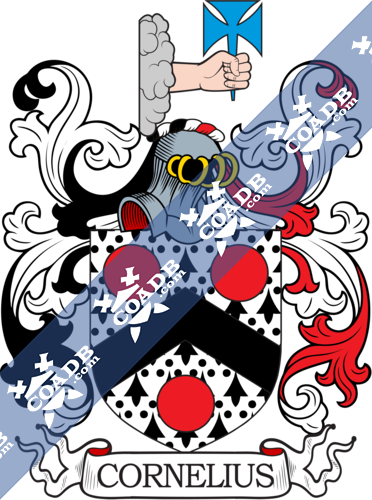 Cornelius is a name who’s origin comes from the Roman Empire, specifically a name associated with the Roman Legions. The origin of the name in Latin is Cornu, meaning horn. The Romans developed a type of musical horn shaped like an upper case ‘G’ which they used to give specific orders, as in march, or move left. An officer in charge of translating written or verbal orders into music was called a Cornicern. It was a vital and dangerous job, as the Cornicern became a target for the opposition. From the root of Cornelius, we also derive the names Cornet-(musical instrument,) Cornice-(A quarried stone, used as an architectural element,) and it is the basis for the word ‘Corner.’

It is thought the original name stemmed from a Roman Legion Officer by the name of Castus Cornelio who had a son named Cornelius, who in turn became a famous prelate in the early Roman Catholic Church and one of the first Bishops of Rome-( Pope.) He was martyred because he would not conduct or be a part of a ceremony ordered by Emperor Diocletian for the worship of the God Mars. For his martyrdom he was later made into a saint for the miracles he performed in the day of his execution. On his way to his death, he healed a Roman Centurion’s wife who was ill, by laying his hands upon her body. Because of the persecution of Christians under Diocletian, after the woman had been healed, she and her husband had converted to Christianity, they were killed by the Praetorian Guard of the Emperor.

There are many legends surrounding St. Cornelius. His drinking horn was thought to be the front claw of a winged Griffin, given to him by the Griffin in exchange for the prayers the St Cornelius had said, which healed an injury. St Cornelius is not a well known Pope. However his belief no one was past redemption if they honestly confessed their sins, and were contrite has been a cornerstone of Christian theology every since his death in 251 AD.

The surname of Cornelius migrated to England as part of the Norman Invasion. It most certainly came with the Norman priests who followed shortly after William the Duke of Normandy made his conquest secure. As with most Latin based names when translated into the early form of English, there was little of no rules regarding the spelling of names, Cornelius has multiple spellings, such as Cornell, Cornel, Corneille, Cornielje, and Quernell. The earliest variation became de’ Cornell, which appears written in the mid 13th century as witness to an ecclesiastic contract where the Bishop of London’s chapter of St. Paul gave permission of a newly formed chapel dedicated to St. Mary allowing them to celebrate a high mass or divine service if they gave over a portion of the offerings to the parochial church dated in 1254.

St. Cornelius had a portion of his body, ( his skull, and a few finger bones) transported to a church in German built in his honor, named Kornelimunster. The town which sprang from the church still carries both the name of their beloved saint, but the civic arms of the city retain a golden horn as part of their arms. St. Cornelius became popular in the 10th and 11th centuries, as he was the patron saint of lovers. His fame as a healer and one who looked over wayward lovers spread all Germany and from there is traveled north into Holland and west in France. It is of interest to note the Corneille family of France were made nobles in the late 17th Century by King Louis XIV in October of 1669. During the French Revolution the French family moved to Holland to escape the persecution of the French nobility. With a change in location brought a change in spelling. Corneille became Cornielje in Dutch. The family became Barons within the Dutch peerage system and remain so to this day.

Royalty and other notable people associated with the surname Cornelius:

Places associated with the surname of Cornelius:

Notable people with the surname of Cornelius:

Peter von Cornelius-German painter of the latter half of the 18th and the early19th century.

Notes: None. Blazon: Ermine a chevron sable between three torteaux. Crest—Out of a cloud on the sinister side a dexter hand fesseways proper holding a cross pattee fitchee azure. 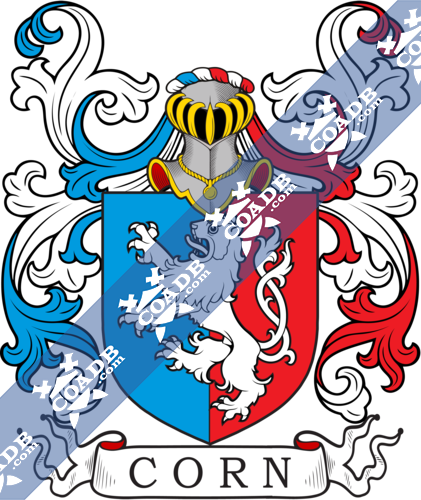 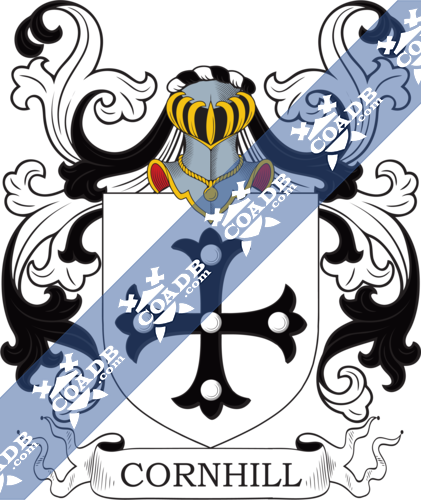