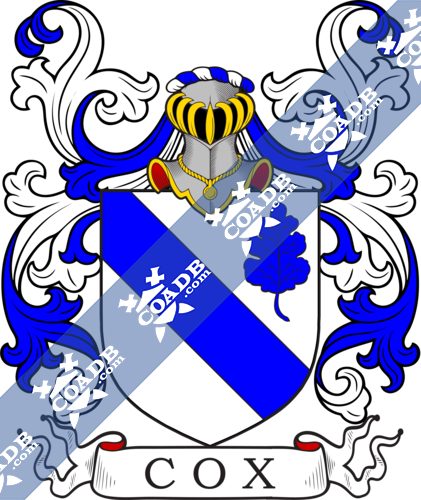 The first recorded spelling of the surname of Cox was in the country of England. One person who was named as Aluuinus Coc was mentioned in the Doomsday Book of 1086. It is important to remember that the Doomsday Book was created to encompass the “Great Survey” of England in this time period. The Doomsday Book was ordered, decreed, and written under the reign of one King William I of England, who was known throughout the ages as “The Conqueror.” King William I of England ruled from the year 1066 to the year 1086. Other mentions of the surname of Cox in the country of England include one William le Cocke, who was mentioned in the year 1319 in the Subsidy Rolls of London. In the year of 1556, one Alicea Cox was married to Burkrave Westdrop at St. Martin in the Fields, which is located in Westminster, London. Those who bear the surname of Cox in the country of England can be found in the areas of in and around the city of London, as well as the central and northern regions of England in large concentrations.

The United States of America was a hotspot for European settlers to migrate to in the early 1600’s. This movement was referred to as The European Migration. Among those who moved to the United States were people who carried the surname of Cox to this new country. The first of the new settlers who was recorded to have the surname of Cox was one person by the name of Lasse Cox, who arrived in the city of Philadelphia, Pennsylvania in the year of 1637. Those who carry the surname of Cox can be found in large concentrations in the areas of North Carolina, Virginia, Texas, California, Oklahoma, Georgia, Indiana, Missouri, Tennessee, Illinois, and New York.

Daniel Rinald “Ronnie” Cox (born in 1938) who was a character actor from America, and was a singer/songwriter and guitarist

Joseph Cox, who was a Republican politician from America, and served as a Circuit Judge in the Ohio 1st Circuit from the year 1885 to the year 1899

Mrs. Joseph Cox, who was a Republican politician from America, and served as the Alternate Delegate to the Republican National Convention from Washington in the year 1956

Joseph A. Cox, who was a Democratic politician from America, and who serves as the Alternate Delegate to the Democratic National Convention from New York in the year 1952, served as the Justice of the New York Supreme Court in the 1st District in the year 1953

Joseph Harper Cox, who was a Democratic politician, and served as the Postmaster at Seaford, Delaware from the year 1934 to the year 1954

1) (Dunmanway, co. Cork, bart., registered in Ireland, 22 Jan. 1706-7, to Sir Richard Cox, Knt. and Bart., Lord Chancellor of Ireland). Or, three bars az. on a canton gu. a lion’s head erased ar. Crest—A goat’s head erased az. armed or.
2) (Coolcliffe co. Wexford, confirmed 1816, by Betham, Ulster, to Col. Sir Williams Cox, Knt., K.T.S.). Motto—Fide et fortitudine. Or, three bars az. in chief a trefoil slipped vert on a canton gu. a lion’s heads erased ar. Crest—A goat’s head erased az. Armed or, holding in his mouth a trefoil slipped vert.
3) (confirmed to William Cox, Esq., of Ballynoe, co. Limerick). Motto—Fortiter et fideliter. Ar. three bars gu. on a canton az. a lion’s head erased or. Crest—An antelope’s head erased sa. crined or, pierced through the neck with a broken spear ppr.
4) (Beamonds, co. Hertford). Or, three bars az. on a quarter gu. a lion’s head couped ar. Crest—A goat’s head erased sa. horned, bearded, and pierced through the neck with an arrow or, the wound guttee de sang.
5) (Chichester, co. Sussex, descended from Lawrence Cox, son of John Cox, of Monmouth). Or, three bars az. on a canton gu. a lion’s head erased ar. Crest—A griffin’s head erased sa. pierced through the neck with an arrow gu. headed and feathered ar.
6) (Broxwood and Eaton Bishop, co. Hereford). Or, three bars az. on a canton gu. a lion’s head erased ar. Crest—An antelope’s head erased ppr. pierced through the neck by a spear.
7) (Charton, Farningham, co. Kent, and Trevereux, Limpsfield, co. Surrey). Motto—Chescun son devoir. Barry of ten or and az. three escutcheons, two and one, gu., each charged with a horse salient ar., quartering three other coats, viz., sa. a cross or, on a chief ar. three eaglets gu., for Penary, or Peneret, of Ash and Ryarsh, Kent; ar. a pale nebulee gu. on a canton of the last, a cross flory ar., for Middleton, of Middletons. Longfield, Kent; erm. a chev. vaire or and gu. betw. three wolves’ heads erased az., for Miller, of Addington and Ryarsh, Kent. Crests—A demi horse ar. charged on the shoulder without a thunderbolt ppr.; over it, An tu tonitru; and the following crest of augmentation, now borne as the first crest—Upon a bow fesseways or, a stag at gaze ar. attired unguled gorged with a collar and chain reflexed over the back, gold.
8) (co. Gloucester and London). Ar. a bend sa. in the sinister chief an oak leaf az. Crest—A goat’s head ar. attired or, in the mouth an oak leaf az.
9) (Beaminster). Sa. a chev. betw. three stags’ heads cabossed, ar. Crest—A stag, levant, reguard. ar.
10) (London; granted 1761). Ar. three cocks gu. two and one, crowned or, on a chief az. a pale charged with a rose of the second betw. two ostrich feathers of the first. Crest—A cock gu. ducally crowned or.
11) (alias Cokks).(London). Sa. two bars humettee or, betw. as many swans, one in chief the other in base ar. beaked and legged gu. betw. the bars a cock of the third combed legged and wattled of the fourth. Crest—A dexter Arms
12) (Bromerton, co. Norfolk). Sa. on a chev. betw. three griffins’ heads erased or, as many estoiles gu. Crest—Out of a ducal coronet a griffins’ head betw. two wings.
13) (Shropshire). Ar. a bend az. in the sinister chief an oak-leaf of the second.
14) (Cox Green, co. Stafford). Per chev. gu. and az. in chief two roses ar. in base a plate (another, a bezant) betw. as many cocks respecting each other of the third combed and wattled gu.
15) Sa. a chev. betw. three bucks’ scalps ar. Crest—On an arm ar. a bend az. the hand holding a triple branch of pinks ppr. Leaved vert.
16) (Sheriff of Dublin, temp. Queen Anne). Arms, same as the preceding with three hurts on the chev. Crest—A wyvern tail nowed ppr.
17) (Clent, Stone, and Kidderminster, co. Worcester). Arms, from the monumental inscription at Clent to John Cox (who d. 1705), and at Kidderminster to Joseph Cox (who d. 1737). Gu. three cocks ar. two and one.
18) (Clement Park, co. Forfar, 1866). Motto—Praemium virtutis honos. Or, a chev. az. betw. two mullets pierced in chief and a lion’s head erased in base gu. Crest—A dexter arm embowed issuing out of the sea holding in the hand an anchor in bend sinister, cabled ppr.
19) Quarterly, gu. and vert, on each quarter a bezant.
20) Barry of six or and az. on a canton ar. a cross gu.
21) Ar. a chev. betw. three wolves’ heads erased sa.
22) (co. Lincoln). Motto—Prodesse quam conspice. Quarterly: 1st and 4th, gu. a chev. or, between three attires of a stag, affixed to the scalps ar.; 2nd and 3rd, az. a tower with two side-pieces ar. within a bordure or, charged with eight mullets sa. Crest—On a mount a stag lodged reguard. ppr. 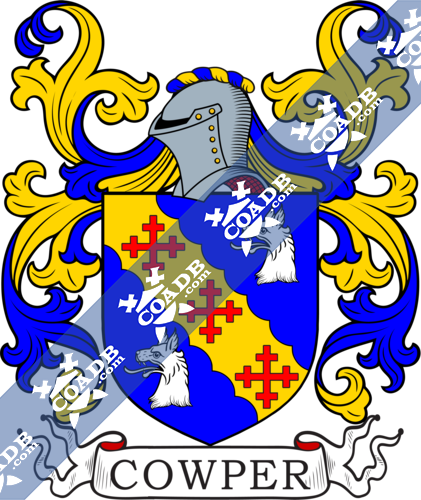 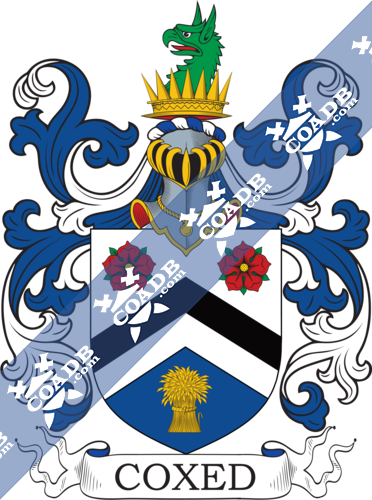