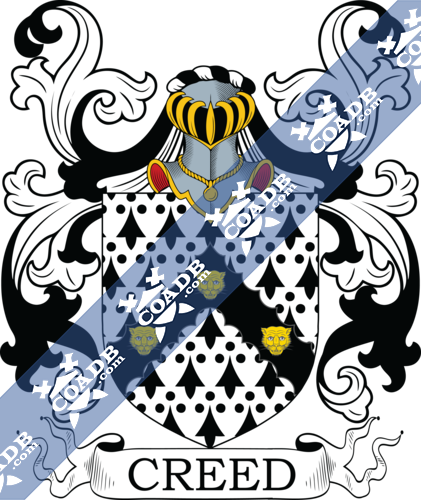 This interesting surname is of Anglo-Saxon origin, and is locational from a place so called in Cornwall, and means “(the church of) St. Creda or Crida”, named after a 7th Century female priest who considered to have come from Ireland. More common variations are: Creedy, Creede, Creedo, Coreed, Creeda, Cred, Creedey, Careedy, Creedee, Creedeu.

The surname Creed first appeared in Cornwall Where they held a family seat from very early times, some say well before the Norman Invasion and the arrival of Duke William at Hastings in 1066 AD. The very first recording spelling of the family was shown to be that of Wadin Crede, dated 1191, in the “ Pipe Rolls of Warwickshire”. It was during the reign of King Richard 1, who was known as King Richard 1, dated 1189-1199.  Surname all over the country became a necessity with the introduction of personal taxation.  It came to be known as Poll Tax in England.  Surnames all over the country began to develop with unique and shocking spelling varieties of the original one.

1) (Sarum, co. Wilts, granted 4 June, 1663). Erm. on a chev. engr. sa. three leopards’ faces or.
2) (London). Erm. on a chev. sa. cotised gu. betw. three estoiles of the last as many leopards’ faces or. Crest—A dove with an olive branch ppr.
3) Same Arms, the field ar. Crest—A demi wolf reguard. erminois holding in the dexter paw an estoile gu.
4) Per pale sa. and gu. on a chev. engr. per pale or, and erm. three leopards’ faces of the second. Crest—On an oak branch vert a dove ar. with a sprig in his beak ppr. charged on the breast with a cross pattee gu.
5) (All Saints, Barnwell, co. Northampton. Arms from the monument of Dorothy, dau. of John Creed, Esq., of Oundle, ob. 1714). Az. a chev. betw. three swans ar. 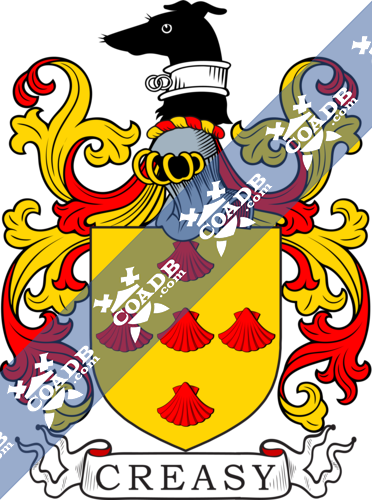 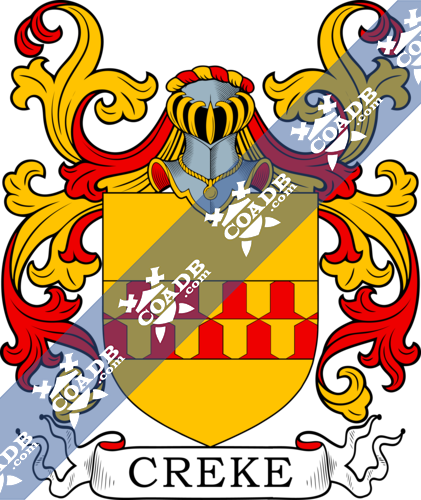