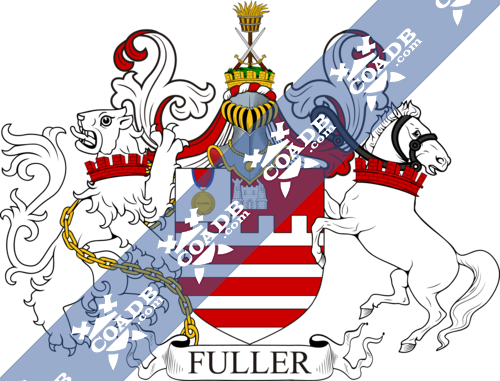 1) (Hyde House and Germans, co. Bucks). Ar. three bars and a canton gu. Crest—On a mount vert a beacon erect fired ppr. Motto—Fermiora futura.
2) (Tanners Waldren, co. Sussex). Same Arms. Crest—Out of a ducal coronet gu. a lion’s head ar. Another Crest—Out of a ducal coronet or, a lion’s head ppr. (another, the lion’s head gu.; another, or).
3) (Isle of Wight). Ar. three bars gu. on a canton of the second a castle or. Crest—A dexter arm embowed, vested ar. cuffed sa. holding in the hand ppr. a sword of the first, hilt and pommel or.
4) (co. Kerry; confirmed to James Franklin Fuller, Esq., F.S.A., only son of Thomas Harnett Fuller, Esq., of Glashnacree, by Frances Diana, his wife, dau. of Francis Christopher Bland, Esq., D.L., of Derriquin Castle, grandson of Captain Edward Fuller, of Sackville and Beechmount, by Elizabeth, his wife, dau. of Rev. John Blennerhasset, and great grandson of Thomas Fuller, Esq., Treasurer of co. Cork, by Anne, his wife, dau. of John Purcell, Esq., who was son of William Fuller, Esq., of West Kerries, by Jane, his wife, dau. of William Harnett, Esq., of Ballyhenry, all in co. Kerry, in which county this family has been long settled. John Fuller, Esq., of Ballybowler, co. Kerry, forfeited large estates in that county, as appears by the “Desmond Survey,” 1583). Ar. three bars gu. on a canton of the second a mullet or. Crest—A horse pass. ppr. charged on the shoulder with a mullet or. Motto—Fortiter et recte.
5) (Dominion of Canada; Right Rev. Thomas Brock Fuller, D.D. and D.C.L., Bishop of Niagara, son of Major Thomas Richard Fuller, 41st Regt., a descendant of Fuller, co. Kerry, by Mary England, his wife, dau. of Captain England, co. Clare). Ar. three bars gu. on a sinister canton of the last a tower or. Crest—A martlet ppr. Motto—Fidelitas in adversis.
6) (Lieut.-General Sir Joseph Fuller, G.C.B., d. 1841). Ar. three bars gu. on a chief embattled of the last, the representation of a castle with broken walls of the field, on a canton of the last a medal of Talavera or, suspended from a red ribbon with blue edges. Crest—Out of a mural coronet or, on a mount vert a beacon erect fired ppr. crossed by two swords in saltire ppr. hilts and pommels or. Supporters—On the dexter, a lion, and on the sinister, a horse, both reguard. ar. and murally gorged gu. the horse bridled sa. and the lion chained or. Motto—Semper paratus.
7) (granted to Augustus Eliott Fuller, Esq., of Rosehill Waldren and Ashdown House, co. Sussex, son and heir of John Trayton Fuller, Esq., by Anne, his wife, only dau. of the gallant defender of Gibraltar, George Augustus Eliott, Lord Heathfield). Quarterly, 1st, ar. three bars and a canton gu.,for Fuller; 2nd, ar. on a bend gu. a close helmet ppr.; 3rd, gu. on a bend or, a baton of the first on a chief az. the fortress of Gibraltar ar. under it “Plus ultra”; 4th, ar. betw. two bars sa. the upper charged with a crescent betw. two plates, the lower with another plate, a lion pass. of the second, in chief three stags’ heads cabossed, also of the second; 5th, az. fretty or, over all a fesse of the second, for Parker, of Ratton. Crests—1st: A horse pass. ppr.; 2nd: Out of a ducal coronet gu. a lion’s head ar.; 3rd: A dexter hand in armour couped above the wrist, grasping a scimetar, all ppr. the wrist charged with a key sa. Mottoes—Over the 1st crest: Currit qui curat; over the 3rd: Fortiter et recte. 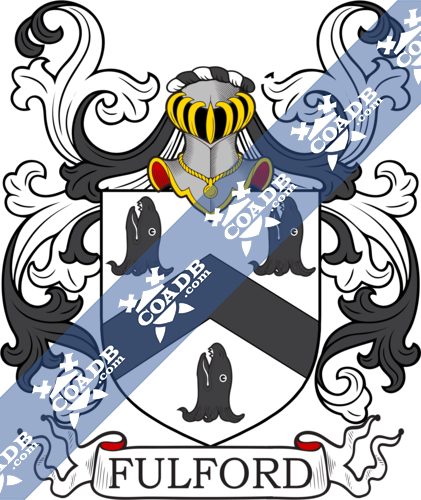