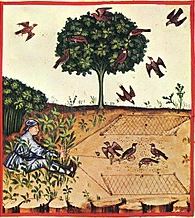 Fullerton Surname Name Meaning, Origin, History, & Etymology
This last name is a Scottish and northern Irish habitational surname denoting a person who was from a place named Fullerton, derived from the Old English words fuglere, meaning “bird catcher” and tun, meaning “enclosure” or “settlement”. Hence, the literally translation of the name is “settlement of bird catchers”. The two main towns that gave birth to this name is considered to be Fullarton in Ayrshire and Foulertoun in Forfar, Scotland. Other locations that might have given rise to this surname include places in Hampshire.

Bird catching was a critical function during medieval times and the Middle Ages in Europe. Medieval-Spell.com contains the following excerpt: “Medieval hunting, cultivated especially in the days of chivalry, was much more than a form of entertainment, it was considered an art and a science. According to Elzéar Blaze, a writer and a captain in Napoleon’s army, Medieval hunting included three categories. First, venery, defined as “the science of snaring, taking, or killing a particular animal from amongst a herd.” Second, hawking, the art of hunting with the falcon, and that of training birds of pray to hunt feathered game. The third was fowling, which initially started out of the necessity to protect the crops against the birds”.

An alternate theory is that it a locational surname referring to a person from a town where cloth is dressed, from fuller, a medieval occupation involving cleaning wool through the process of fulling. 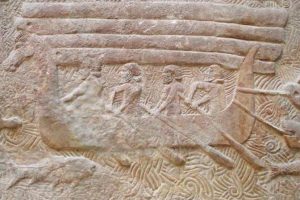 Craig-Fullerton.com offers up legend or family folklore as to why the family’s crest is a camel’s head, since no camel’s lived natively in Scotland: “It has been said that those who were later to call themselves Fowlertoun were descended from Phoenician mariners who were shipwrecked on the northern coast of Europe, possibly where Norway now lies. They joined up with the tribes sweeping south into Gaul or what is now France and eventually aligned themselves with William the Conqueror and joined in the invasion of Great Britain. Because they were for some time in Gaul it has therefore been said that their origin was French”.

Fullerton Family Motto
I have identified three Fullerton family mottoes, translated from Latin to English as follows:
1) Lux in tenebris (Light in the darkness)
2) Mihi terraque lacusque (I have lands and waters)
3) Ad summum emergent (They rise to the top) 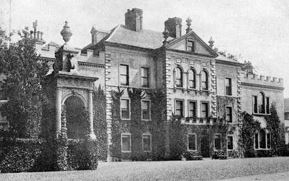 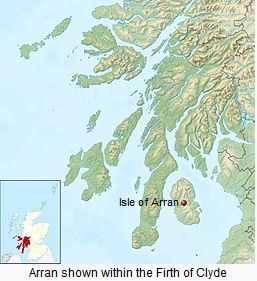 Fullarton of Kilmichael
The lineage of this branch of the Fullarton family tree begins with Fergus Fullarton, or Macloy, who received the lands of Kilmichael for the support he rendered to Robert The Bruce (1274-1329 AD) while he was in concealment in the Isle of Arran. Several generations down the family tree came Major Archibald Fullarton, of Kilmichael and Whitefarland, Scotland, son of Dr. Louis Fullarton and Susannah Stewart, who possessed estates that had been in the family for five hundred years. Major Archibald was a Magistrate and Deputy Lieutenant for county Bute. He married Jane, daughter of Reverend Dr. William Peebles of Ayr, and had a daughter with her named Jane Annabella, who married Menzies James Bowden Fullarton in 1855. He later married Janet, daughter of John Robertson, Esquire of Lawhead, and had two sons and three daughters with her. He died in 1860. Janet Spottiswoode Fullarton of Kilmichael and Whitefarland, Isle of Iran, succeeded to the estates at the death of her sister in 1876. The Fullarton coat of arms or Fullarton family crest is blazoned in the medieval European art of heraldry as follows: Argent, a crescent between three otters’ heads erased gules. Crest: A camel’s head erased proper. Motto: Lux in tenebris. They were seated at Kilmichael, Brodick, Isle of Arran, Scotland. 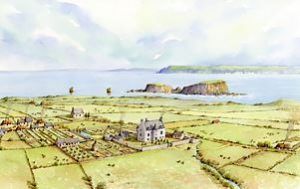 This family is a branch of the Downings, extinct Baronets. Nicholas Downing, Esquire of Drummond, county Londonderry, who died c. 1698 AD is considered the progenitor. Several generations down the came George Alexander Downing, Esquire, son of Dawson Downing, who received considerable lands from his great-uncle, and in compliance with his great-uncle’s testamentary injunction, the surname and arms of Fullarton, and became of Tockingnor and Ballintoy, born in 1775. He married Mary Anne, daughter of James Peacock Esq., and had issue with her as follows: Alexander George (discussed below), George (military officer), David (of Walhampton Park, Lymington, married Susannah Jane Mott and had two sons and eight daughters with her), Catherine, Amy, Susan (married John Maxwell Esq.), Frances (married Sir Andrew Armstrong, Baronet), and Mary Anne (married Reverend Canon Howman). His son, Alexander George Fullerton was an Esquire of Ballintoy Castle, county Antrim, and a Brevet Major in the Army, born in 1808. In 1833, he married, in Paris, France, Lady Georgiana Leveson-Gower, daughter of Earl Granville, and had a son and heir with her named William Granville, born at the British Embassy in Paris in 1834.

Fullerton of Thrybergh Park
The progenitor of this branch of the Fullerton family tree is Allan Fullarton, who lived c. 1240 AD.  His son, Adam Fullarton, received a charter of lands of from James, High Steward of Scotland, which was renewed by King Robert II of Scotland in 1371 AD. He had a son named Reginald Fullarton, who lived c. 1310 AD, and had a son named Sir Adam Fullarton, of Fullarton. In 1346, Sir Adam accompanied the army under King David II of Scotland into England and was created a Knight by that monarch. He was taken prisoner with King David II at the Battle of Durham. He married Marjorie, a lady of the Stewart family, and had to sons with her: John was (was taken prisoner with his father and left for ransom, had a son named Reginald) and David (obtained a charter from Hugh Eglintoun of the lands of Laithis). He died in 1399 and was succeeded by his grandson Reginald. Reginald had a son named Rankin Fullarton, who lived around 1412 AD. From him descended James Fullarton, who married Agnes, daughter of John Fullarton of Dreghorn, with wife Jean, daughter of John Mure of Rowallan, and had three sons with her: 1) James Fullarton (ancestors of the Fullartons of Fullarton, county Ayr, Scotland), 2) John (served with the army in Germany and in 1639 went to France as Lieutenant College to the Honorable Alexander Erskine, he was advanced to rank of Colonel in the French service by King Louis XIII of France, acquired the estate of Dudwick in Aberdeen. He married and had issue, including a descendant named General John Fullerton of Dudwick who distinguished himself in the Prussian and Russian services), and 3) William. His third son, William Fullarton, Minister of St. Quivox, married Frances, daughter of Stewart of Reece, a cadet of the Stewarts of Reece, and had issue including a son named Robert. Robert Fullerton, of Craighall, lived in 1660 and married Barbara, daughter of John Wallace, and had issue with her as follows: John (his heir), Robert, William, Adam, George, Barbara, and Isabel. His heir, John Fullerton of Craighill, was born in 1716. He married Ms. Weston of West Horsley Place, county Surrey, England, and had issue with her as follows: John (heir), Weston, and Judith (married Savile Finch Esq. of Thrybergh, county York, England, Member of Parliament for Malton). He was succeeded by Reverend John Fullerton, Rector of Stratford-on-Avon, who married Rebecca Garth and had two issue with her: John and Judith. His son, John Fullerton Esq. of Thrybergh, Denaby, and Brinsworth, county York, born 1788. In 1801, he married Louisa, daughter of Tore Townsend of Honnington Hall, and had issue, including: 1) John (his heir), 2) Weston (married Charlotte, daughter of Reverend T. Trebeck, Rector of Chirley, had issue named John Reginald, Thomas, a Commander in the Royal Navy, Cecilia Louisa Anne, and Seline), and 3) Thomas, 4) Reverend Arthur (Rector of Thrybergh, married Augusta Dyson), 5) Anna (married George Ramsden Esq. of the Priory), 6) Elizabeth (married D.H.W. Pickard, Esq. R.A. of Hooton Hall, Rotheram, county York, and Sturminster Marshall, Dorset), 7) Horatio Sophia, and 8) Frances (married Reverend Charles Smith, Rector of East Sarstone). Colonel Fullerton died in 1847 and was succeeded by his eldest son, John Fullerton, Esquire of Thrybergh and Brinsworth, married, in 1827, Louisa, daughter of Sir Gray Skipwith, Baronet of Newbold Hall, and had issue with her as follows: 1) Thomas Gray (discussed below), 2) Reverend Charles Garth (Rector of Boothby Graffoe, married Catherine, daughter of Reverend A. R. Kenney, Rector of Bourton), 3) Robert, 4) Arthur George (Lieutenant Commander Royal Navy, married Isabella, daughter of Colonel St. Aubyn Molesworth), 5) Louisa, 6) Augusta Selina, 7) Sophia (married Reverend Henry Taylor Cordeaux, Vicar of Kilnhurst), 8) Julia Frances, 9) Emma, 10) Charlotte, and 11) Ellen. He died in 1871, and was succeeded by his eldest son Thomas.Thomas Gray Fullerton, Esquire of Thrybergh, county York, England and of Brunswith House, Clapham, Surrey, was born in 1828. In 1857, he married Euphemia Margaret, daughter of Reverend Dr. Worsley of Gatcombe, Isle of Wight. The Fullerton coat of arms of Fullerton family crest for this branch of the family tree is blazoned as follows: Argent, a chevron between three otters’ heads erased gules. Crest: A camel’s head and neck erased proper. Supporters: Two savages wreathed with laurel about the head and middle each holding in the exterior hand a club resting on the shoulder all proper. Motto: Lux in tenebris. They were seated at Thrybergh, Rotherham. 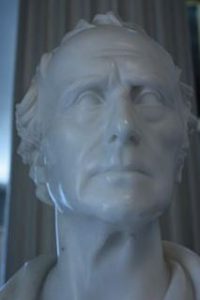 Notables
There are hundreds of notable people with the Fullerton surname. This page will mention a handful. Famous people with this last name include:
1) Charles Gordon Fullerton (1936-2013) was a Colonel in the US Air Force and a NASA astronaut born in Rochester, New York
2) Curtis Hooper Fullerton (1898-1975) was an American baseball pitcher who played for the Boston Red Sox from 1921-1925 and 1933, born in Ellsworth, Maine
3) David Fullerton was a member of the US House of Representatives for Pennsylvania from 1819-1820, previously serving in the Pennsylvania State Senate from 1827-1839
4) Reverend Dr. Donald B. Fullerton (1892-1985) was a Christian missionary and teacher born in Brooklyn, New York, who founded the Princeton Christian Fellowship,  having also served in World War I as a 2ND Lieutenant.
5) Admiral Sir Eric John Arthur Fullerton (1878-1962) was a British Royal Navy officer who served in World War I and II, having commanded the HMS Orion and HMS Mersey.
6) John Arthur Fullerton (1912-1965) was a politician who served in the Legislative Assembly of Ontario, Canada from 1945-1963, born in Thessalon
7) Robert Fullerton (1773-1831), born in Edinburgh, Scotland, was governor of Penang (a state in Malaysia) and the first governor of Straits Settlements
8) William Young Fullerton (1857-1932) was a Baptist evangelist, administrator, and writer from Belfast, Ireland who served as President of the Baptist Union and Home Secretary of the Baptist Missionary Society, known for influencing the preaching of Charles Surgeon
9) Hugh Stuart Fullerton III (1873-1945) was an American sportswriter from Hillsboro, Ohio, one of the founders of the Baseball Writers’ Association of America, best known for uncovering the 1919 Black Sox Scandal in the World Series
10) Terry Fullerton (1953) is a retired British race car driver from London England, active from the 1960s through 1984, known for winning the Karting World Championship 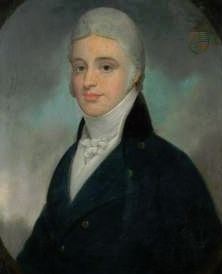 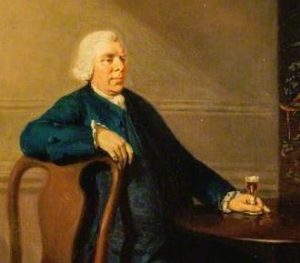 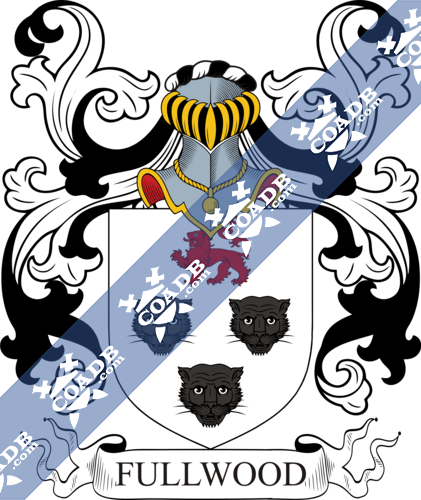