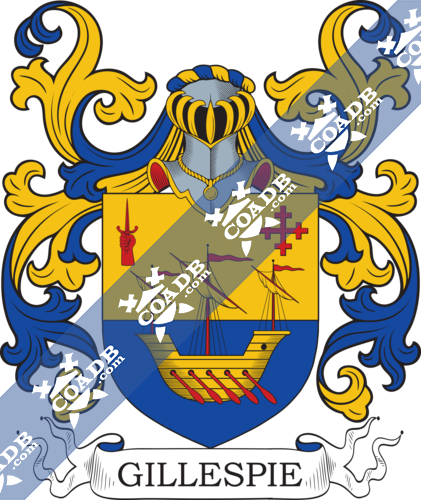 Gillespie Surname Name Meaning, Origin, History, & Etymology
This Scottish and Irish (or Pictish-Scottish) last name is a reduced or shortened Anglicized form of the Gaelic surnames MacGilleEasbaig (Scottish) and MacGiollaEaspaig (Irish), both patronymics (son of, descendant of) a byname (nickname), derived from the Old Irish word epscop, from the Roman Latin eposcopus, meaning “bishop” or “leader”. The surname is thought to have pre-dated the tenth century AD.

The Gillespie family of Scotland were erenaghs, a medieval Irish office, or hereditary landed title, the responsibilities of which included collecting rents and tithes, overseeing termonn (church owned) lands, and building and maintaining churches. As such, the role was prebendary (senior member of the church) in nature.

Another origin theory, considered false, is summarized as follows in the 1857 book by William Arthur titled An Etymological Dictionary of Family and Christian Names: “The Gaelic for Archibald, from Gille, a youth or servant, and speach, a word expressive of quickness and sharpness in battle; spuaic, Gaelic, to break the head, to knock”. Yet another author believes is a habitational name denoting a person who was from Gillesbie, an area in Dumfriesshire, Scotland.

The surname has a strong presence in County Down, Ulster, Ireland. Wikipedia states the following regarding the Gillespie name in the Emerald Isle: “In Ireland, a family bearing the surname occupied the office of toísech of Clann Aílebra in the late twelfth century. In 1172, for example, the toísech was slain by Donn Slébe Ua hEochada, King of Ulster. This slain Mac Gilla Espuic may be identical to a certain Gilla Óengusa mac Gilla Espuic, rechtaire of the Monaig of Ulster, who is earlier recorded in the king’s service. Whatever the case, a later family bearing the surname appears on record as erenaghs of Kilraine in County Donegal”.

The surname is also present in England. There is a branch of the family in Northumberland, England who descended from Guileaspos Cambell who invaded said county in 1360 AD.

One source asserted the progenitor of the family was a Chieftain named Sliochd Gillies of the MacPhersons of Invershie. However, it is believed this connection is vague and the more likely, first known bearer, was Ewan Gillaspeck who lived near the end of the twelfth century AD.

A website titled Scottish Gillespies states the following in regard to this last name “The Filid were druidic bards, attached initially to the courts of the Irish tribal kings, who were called the “Rig” in their Celtic communities….By the second half of the 7th century, most of the Filid had converted to Christianity…. For the following centuries up to the Synod of Cashel in 1101, the Bishops, the Asbuig, of this Celtic society with its tradition of orally recited law, now attempting to integrate Canon Law with the Brehon Code, used the Filid to establish their own honour price in the courts. The honour price of a Bishop, Asbuig, came close to that of a tribal king, Rig….I n 1111, the Synod of Rathbeasail accorded the province of Armagh, which included Dal Riada (the area of Argyll in today’s Scotland) a total of 12 sees. During the following critical surname period marked by the Normanization of the Scots, there were arguably 12 FilidAsbuig in the service of the 12 bishops responsible for these dioceses extending from Donegal and Down in Ireland, to Argyll in Scotland. These men, who were to have offspring bearing their names, were conceivably deacons, and not under full orders”.

Gillespie Family Mottos
I have identified four family mottos for Gillespie and have translated them from Latin to English:
1) Qui me tangit paenitebit (He who touches me will repent)*
2) Moderata manent (Remain moderate)
3) Fidelis et in bello fortis (Faithful and brave in war)
4) In certa salutis anchora (On a sure anchor of safety)
5) Touch not the cat bot a glove (bot means “without” in this context)

*This is also the motto of the US Army 315th Regiment

Early Bearers of the Gillespie Surname
Teag Mac Giolla Epscoip, Chief of Aeilabhra in the Barony of Iveagh, was recorded in 1175 AD.
Ewan Gillaspeck was witness to a charter in Scotland c. 1199 AD.

Gillespie of Mountuhanie
David Gillespie, Esquire of Mountguhanie House, county Fife, Scotland, was a Justice of the Peace and Deputy Lieutenant born in 1814. He was the son of David Gillespie Esq. of Mountquhanie and Mary Carnegie of Pittarrow, and grandson of John Gillespie who died in 1781. In 1840, he married Susan, daughter of Lieutenant General Bethune of Blebo and had issue as follows: David, Alexander, James Carnegie, and Maria (married James Carnegie, Esquire of Stronvar, her cousin).

From Ireland to Virginia
George Gillespie or Gillaspie, son of George, was born in Ireland in 1731. He went to colonial America. He married three times: Mary Ann, daughter of Hezekiah Saunders, Mollies Farris, and Mary Moore. He had the following issue: William, Sherod, Letitia, Frances, Lucy, Elizabeth, Alexander, Sarah, Dicey, Lewis, Margaret, and George Jr. Two of his sons are discussed as follows:
1) William Gillespie was born in Virginia c. 1753. He married Nancy, daughter of Joshua Hudson Sr., and had issue with her: Lewis H., Wilson G., Gabriel, Joshua, Elizabeth, George Washington, Mary Polly, Phillip, and Susannah. He was killed in a duel with General Thomas Kennedy over a card game.
2) Lewis Gillaspie was born in Virginia c. 1775. He married Elizabeth, daughter of Charles Farris and Mary Ann Saunders, and had issue as follows: Micajah L. Gillespie, James Nathan, Selina, and William H. He died in Tennessee.

Notables
There are hundreds of notable people with the Gillespie surname. This page will mention a handful. Famous people with this last name include:
1) George Lewis Gillespie Jr. (1841-1913) was an American soldier who received the Medal of Honor for his actions in the American Civil War while fighting with the Union Army, which were “carrying dispatches through enemy lines under withering fire to Major General Philip Sheridan at the Battle of Cold Harbor, Virginia on May 31, 1864”, born in Kingston, Tennessee
2) John Birks “Dizzy” Gillespie (1917-1993) who was an American jazz singer, composer, bandleader, and trumpeter born in Cheraw, South Carolina, that became a major figure in popularizing and creating modern Jazz, along with Charlie Parker
3) Colonel John Hamilton Gillespie (1852-1923) was a Scottish-American soldier, businessman, and land developer who became the first mayor of Sarasota, Florida
4) Nicholas John Gillespie (1963) is an American libertarian journalist and was editor-in-chief of Reason from 2000 to 2008, born in Brooklyn, New York
5) Alastair William Gillespie (1922-2018) was a member of the Canadian Parliament for Etobicoke from 1968-1979, born in Victoria, British Columbia
6) Major Archibald H. Gillespie (1812-1873) was an officer in the US Marine Corps during the Mexican-American War, serving from 1832-1854, born in New York City


7) Billy Gillespie (1891-1981) who was an Irish football player from Kerrykeel who plated from 1907-1933 for three teams: Institute, Leeds City, and Sheffield United
8) John Imrie Gillespie (1879-1943), also known as Jimmy Gillespie, was a Scottish rugby player who played for Scotland’s national team from 1899-1904 and for Great Britain’s national team in 1903
9) James Gillespie, a veteran of the North Carolina Militia during the American Revolution, served in the US House of Representatives for North Carolina from 1793-1799 and again from 1803-1805.
10) James Lamont Gillespie (1888-1975) was an American composer and lyricist born in Covington, Kentucky who wrote numerous songs, including You Go to My Head and Santa Claus is Coming’ to Town
11) Dean Milton Gillespie (1884-1949) was a member of the US House of Representatives from 1944-1947, born in Salina, Kansas
12) Margaret Vandemore Gillespie (1969) is a member of the South Dakota House of Representatives who assumed office in 2001, born in Hawarden, Iowa
13) Patrick Gillespie (1617-1675) was a Scottish minister and Principal of the University of Glasgow who supported the Covenanters (Presbyterian)

Another notable was Eliza Maria Gillespie “Mother Angela Gillespie, a nurse who tended to the wounded on both sides of the American Civil War. The following is an excerpt about her from Americancivilwarforum.com, “Once, a seriously wounded Confederate officer was brought to Mound City. When word got around, an angry mob stormed the hospital, determined to drag the officer out and execute him. But Mother Angela stood over his bed and refused to leave until the Confederate had been guaranteed safe passage home. In September 1862, Mother Angela returned to St. Mary’s Academy, assured that the soldiers’ needs would be met from other sources“.

1) (Scotland). Per fess or and az. a galley of the first with oars, mast, and flag gu. in dexter chief a hand couped holding a dirk in pale, and in sinister chief a cross crosslet of the third.
2) (Newton, Scotland). Az. a chev. wavy ar. betw. three roses gu. slipped or. Crest—An anchor ppr. Motto—Tu certa salutis anchora.
3) (Gillespie-Stainton) (Biggarshiells, co. Lanark, and Bitteswell, co. Leicester, 1873). Quarterly, 1st and 4th, az. a three-masted ship, sails furled and flags flying in chief, a crosslet fitchee betw. a pelican in her piety, and a dexter arm fessways couped below the elbows, the hand holding a dagger erect all ppr., for Gillespie; 2nd and 3rd, az. on a chev. ar. betw. three boars’ heads erased of the second, as many cinquefoils of the first, for Stainton. Crests—A wild cat saliant ppr. for Gillespie; A fox saliant ppr. collared or., for Stainton. Mottoes—Qui me tanget paenitebit, for Gillespie; Moderata manent, for Stainton. 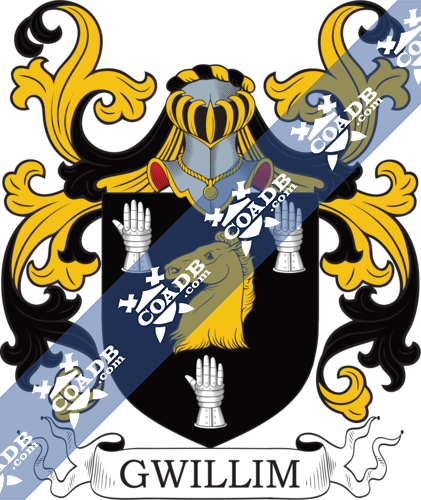 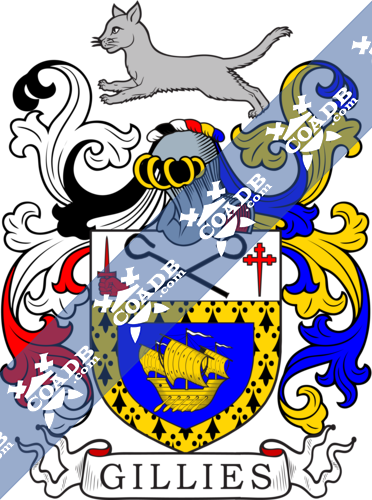