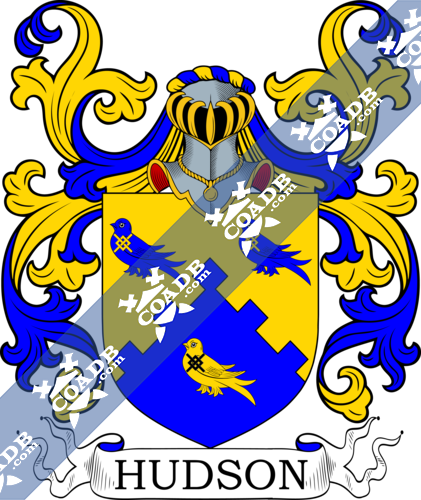 The first recorded spelling of the surname of Hudson was found in the country of England. One person by the name of William Hudde was named and mentioned in the Hundred Rolls of Cambridgeshire in the year of 1273. This document, the Hundred Rolls of Cambridgeshire was ordered, decreed, and written under the reign of one King Edward I, who was known throughout the ages as one “The Hammer of the Scots.” King Edward I was such nicknamed for all of the wars and conquests that he waged on the country of Scotland during his reign, which was from the year 1272 to the year 1307. Those who bear the surname of Hudson in the country of England can be found in the counties of Yorkshire, Devonshire, and in Cornwall in high concentrations.

Saul Hudson (born in 1965) who is most notably recognized by his stage name of Slash, who is a musician and songwriter from England, who is known for his stint as the lead singer of the American hard rock band Guns N’ Roses, and who was inducted into the Rock and Roll Hall of Fame in the year 2012

Rock Hudson (1925-1985) who was born with the name of Roy Harold Scherer Jr. and who was a four-time Golden Globe winning actor, who was most notably recognized for his roles in comedy stints with the actress Doris Day

Brett Hudson (born in 1953) who is a musician, singer and songwriter from America, and who is one of the Hudson brothers

1) (Melton Mowbray, co. Leicester, bart., extinct). Per chev. embattled ar. and gu. three escallops counterchanged. Crest—A griffin’s head erased ar. gorged with a mural crown gu. charged with three escallops of the first.
2) (Wanlip, co. Leicester, bart.; Sir Charles Thomas Hudson, second bart., assumed the surname of Palmer by royal licence, 1813. See Palmer, Bart., of Wanlip). Per chev. embattled or and az. three martlets counterchanged. Crest—A martlet or.
3) (London). Quarterly, per fesse embattled or and sa. three martlets counterchanged. Crest—A dexter hand erect, holding with the thumb and forefinger a bezant ppr.
4) (London). Per chev. embattled or and vert three martlets counterchanged. Crest—A martlet vert winged or.
5) (Park Crescent, Portland Place). Or, on a fesse betw. three boars’ heads couped gu. as many lions ramp. of the field. Crest—A lion’s head erased or.
6) (Preston, co. Lancaster). Gu. on a fesse or, betw. three boars’ heads erased ar. as many lions ramp. sa. Crest—A lion holding a boar’s head erased betw. the forepaws all ppr.
7) Same Arms, the boars’ heads couped. Crest—A lion ramp. or, holding betw. the paws a boar’s head couped sa.
8) Per chev. embattled or and az. three martlets counterchanged. Crest—A martlet sa. wings or. Another Crest—On a rock ar. a martlet or (another, on a tower ar. a martlet az.).
9) (Donaldson-Hudson, Cheswardine Hall, co. Chester; exemplified to Charles Donaldson, Esq., second son of John Donaldson, and grandson of Alexander Donaldson, by Elizabeth Hudson, his wife, upon taking the additional name and arms of Hudson, by royal licence, 30 Jan. 1862, on succeeding to the estates of his great uncle, Thomas Hudson, Esq.). Quarterly, 1st and 4th, on a fesse dancettee betw. two boars’ heads couped in chief and a lion ramp. in base gu. two martlets of the field, for Hudson; 2nd and 3rd, ar. a lymphad sa. betw. three dolphins naiant az., for Donaldson. Crests—1st: Upon a mill-rind fesseways sa. a lion’s head erased or, gorged with a bar gemel indented gu., for Hudson; 2nd: In front of a saltire az. a cubit arm erect grasping a dagger and charged with a thistle slipped both ppr., for Donaldson.
10) (granted 10 April, 1766, to Elizabeth Hudson, dau. and heir of Thomas Wilson, of Burlington, co. York, merchant, relict of Benjamin Hudson, of Burlington, eldest son of William Hudson, of the same place, merchant; the arms of Hudson to be borne by the descendants of William, and the arms of Wilson by her descendants as a quartering). Per chev. embattled or and az. three martlets counterchanged, two and one, those in chief charged on the breast with a fret of the first, and that in base with a fret sa. Arms of Wilson—Sa. a wolf saliant or, plain collared az. in chief three estoiles ar.
11) Ar. a cross moline betw. two lozenges in chief and a boar’s head couped in base sa. armed or.
12) (William Hudson, Esq., of Frogmore Lodge, co. Herts.) Gu. on a fesse betw. three boars’ heads erased ar. as many lions ramp. sa. Crest—A lion ramp. holding a boar’s head erased all ppr. 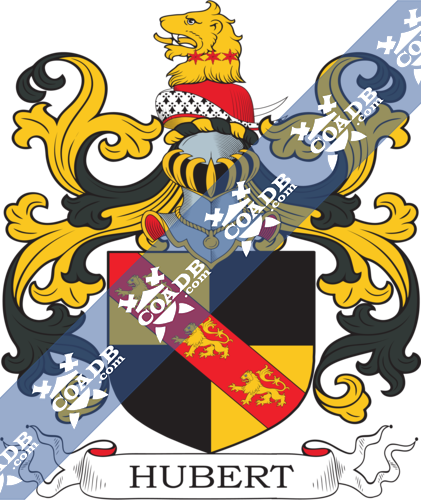 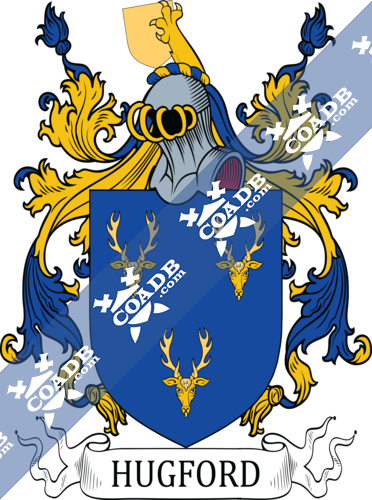