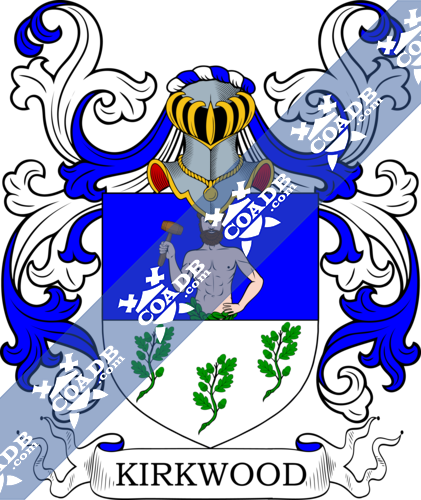 Origins of Kirkwood:
It is an Olde Scottish locational surname.  It starts from one of the places called “Kirkwood” in the earlier counties of Ayrshire, Dumfriesshire, and Lanarkshire.  All of them share the similar meaning and derivation which is from the Gaelic-Old English word “Kirk,” meaning “Church,” itself acquired from the Olde Norse “Kirkja,” and the Middle English suffix “wode,” and the Olde English pre 7th “wudu.”  The place name thus converts as “the church in the wood” or possibly the wood owned by the parish.  The area which now forms much of the new division of Strathclyde was the first part of Scotland to be under English influence, and seemingly English-sounding place names, and hence surnames, have a degree of popularity.  Early examples of the Kirkwood surname records include Alexander Kirkwod, according to the old rolls ‘a follower of the Earl of Cassilis’, who cleared of a murder charge in 1526.  Quite what he had been upto is not clear, but it seems that his master’s power helped his cause.

Scotland:
The surname Kirkwood first appeared in Ayrshire (Gaelic: Siorrachd Inbhir Air), previously a division in the southwestern Strathclyde region of Scotland, that today makes up the Council Areas of South, East, and North Ayrshire, where they held a family seat from very old times, some say well before the Norman Invasion and the arrival of Duke William at Hastings in 1066 AD.

The very first recorded spelling of the family was shown to be that of John Kirkwood, dated about 1476, in the “registers of the Royal Burgh of Stirling.”  It was during the time of King James III, dated 1460 – 1488.  The origin of surnames during this period became a necessity with the introduction of personal taxation.  It came to be known as Poll Tax in England.  Surnames all over the country began to develop, with unique and shocking spelling varieties of the original one.

Ireland:
Many of the people with surname Kirkwood had moved to Ireland during the 17th century.

People with the surname Kirkwood who landed in the United States in the 19th century included Robert and Thomas Kirkwood arrived in Philadelphia in 1846.

1) (Scotland). Per fesse az. and ar. on the first a demi savage issuing, wielding a wooden mallet ppr. on the second three branches of oak vert.
2) (Scotland, 16th century). Gu. three fetterlocks or, on a chev. of the second three pheons of the first.
3) (Woodbrook, co. Roscommon; confirmed to James Kirkwood, Esq., J. P., High Sheriff of that co. 1848, son of Thomas Kirkwood, Esq., of same place, J. P., High Sheriff 1808, and grandson of James Kirkwood, J. P., and to the other descendants of the said last mentioned James Kirkewood). Motto—Spes mea in Deo. Gu. on a chev. or, betw. three fetterlocks ar. a pheon betw. two mullets pierced sa. Crest—A pheon sa. charged with a mullet or. 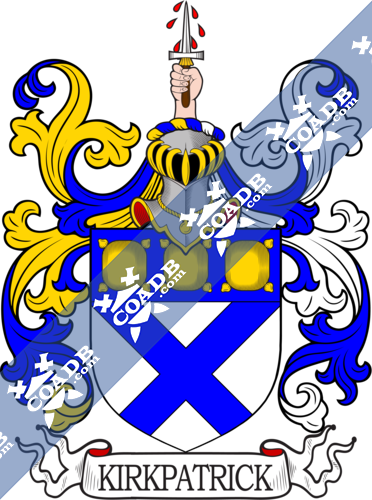 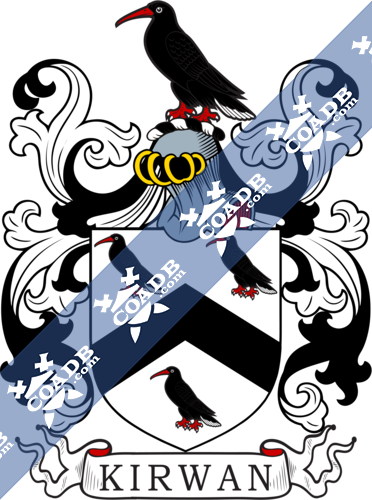