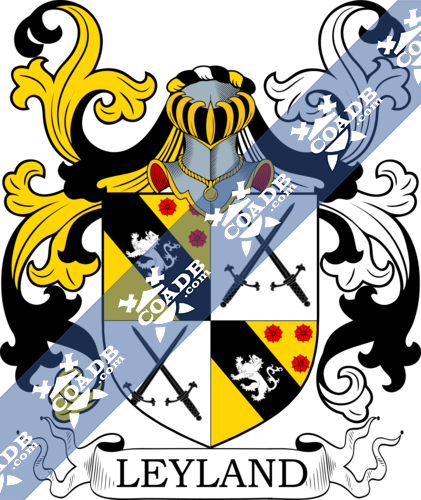 This unusual surname is of Anglo-Saxon origin, and is geographical from Leyland, in Lancashire, which means neglected or uncultivated land, from the Olde English pre-7th Century “laegeland” and the Middle English “layland.” The place name itself noted as “Lailand” in the Domesday Book of 1086 as “Leilandia” in the Lancashire Pipe Rolls, near the year 1160 and “Leylond” in the Lancashire Assize Rolls of 1246. The surname may also acquire from Ealand in Lincolnshire, from the Olde English “ealand,” which means island, land by water. Walter de Leilande introduced in the Pipe Rolls of Lincolnshire in 1205. Finally, the surname may be geographical for a resident by the fallow or untilled land from the Olde English word “laege,” which means unseeded. Robert de Layland noted in the 1219 Assize Rolls of Yorkshire, while the “Calendar of Plea and Memoranda City of London,” shows William de Leylond in 1339. A notable name ancestor was Joseph Bentley Leyland (1811 – 1851), an artist, whose most important works contain a representation of Dr. Beckwith of York, in York Minister and a group of African Bloodhounds.

The origins of the surname Leyland appeared in Lancashire where people held a family seat from old times. Someone say better before the success of Normans and the entrance of Duke William at Hastings 1066 A.D.

The very first recording spelling of the family was shown to be that of Aldulf de Leilande, dated about 1203, in the “Feet of Fines of Kent.” It was during the time of King John who was known to be the “Lackland,” dated 1199-1216. The origin of surnames during this period became a necessity with the introduction of personal taxation. It came to be known as Poll Tax in England.

Many of the people with surname Leyland had moved to Ireland during the 17th century.

Individuals with the surname Leyland who landed in the United States in the 18th century included Thomas Leyland came to Philadelphia in 1751.

The following century saw more Leyland surnames come. Some of the people with the name Leyland who arrived in the United States in the 19th century included Thomas Leyland, who arrived in Washington County, Pennsylvania in the year 1882.

Some of the individuals with the surname Leyland who landed in Australia in the 19th century included Joseph Leyland, an English prisoner from Middlesex, who shifted aboard the “Arab” in February 1834, settling in Van Diemen‘s Land, Australia.

Carl Sonny Leyland is a boogie woogie, blues, and Jazz artist. He was born in 1965 near Southampton, England, but as a child moved to American music. At age 15, he found Boogie Woogie and was inspired to make the piano his career.

Frederick Richards Leyland (September 1831–January 1892) was one of the largest British shipowners, running 25 steamships in the oceanic trade. He was also a major art collector, who nominated works from many of the Pre-Raphaelite painters.

James Richard “Jim” Leyland was born in December 1944. He is a retired Major League Baseball director.

Mal Leyland (born 1945), was an Australian scientist and film-maker.

Paul Leyland was a British mathematician.

1) (Morley, co. Lancaster; Anne, dau. and heir of Thomas Leyland, m. Edward Tyldesley, of Tyldesley). Ar. on a fess sa. a lion pass. betw. two escallops of the field, in chief nine ears of barley gu. three, three, and three, each placed one in pale and two in saltire, and banded with a string or. Crest—A demi dove ar. wings endorsed az. in the beak three ears of wheat or.
2) (The Grange, Hindley, near Wigan, co. Lancaster; John Leyland, Esq., fifth in descent from James Leyland, Esq. d. 1679, seized of an estate in Ashton-in-Makerfield, same co.). Per fess sa. and barry wavy of six ar. and az. in chief nine ears of wheat or, three, three, and three, banded gu. Crest—On a mount vert amid flags a corn-crake all ppr. in tbe beak three ears of wheat or.
3) (co. Lancaster). Motto—God feedeth ye land. Quarterly, 1st and 4th, or, on a bend sa. a lion pass. ar. in chief three roses gu.; 2nd and 3rd, ar. two swords in saltire sa.
4) (co. Lancaster). Ar. on a fesse sa. a lion betw. two crescents of the field. 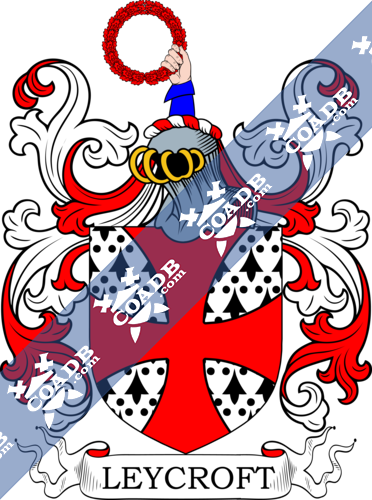 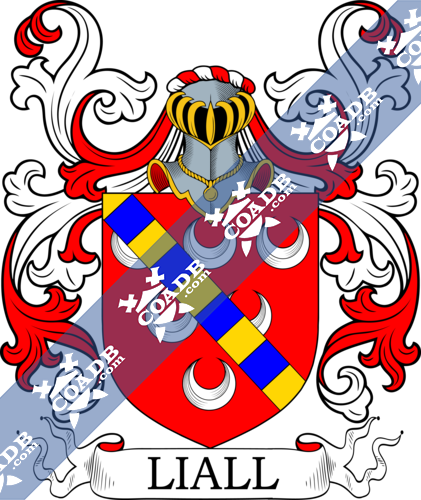