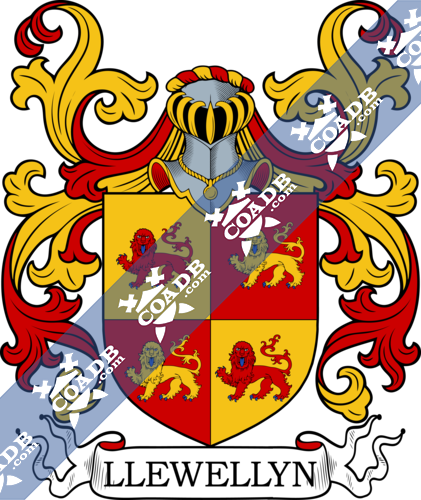 The surname of Llewellyn is said to be a surname that developed from a nickname. It is a common element of surnames throughout Europe that many of them originally derived from nicknames, as it was a very common practice in medieval times. In the beginning, nicknames were applied to people who had distinguishing characteristics, such as moral or mental peculiarities, a similar appearance to a bird or animal, a similar disposition to a bird or animal, occupation of an individual, their habits, or their manner of dress. In the case of the surname of Llewellyn, the word itself comes from the Old English and Welsh Pre 7th Century origins, which themselves derive from the Old Celtic element of “llyw” which can be translated to mean “the leader,” and the addition of the element of “eilun” which can be translated to mean “in the likeness of.” In the case of the surname of Llewellyn, those who originally bore this surname were said to resemble a lion. Researchers debate whether or not “llyw” means lion or leader, but the lion is regarded as the king of the beasts, meaning that the original bearer of this nickname was most likely a leader of some kind.

Brigadier-General Fred Warde Llewellyn (1878-1955) who served as an Assistant Judge Advocate-General of the Army from the year of 1941 to the year of 1943, and who was also from America.

John Anthony Llewellyn (born in 1933) who was a scientist and former NASA astronaut from America.

Samuel Llewellyn (1841-1915) who was a Prohibition Candidate for the U.S. Representative from the state of Ohio in the 10th District in the year of 1906, and who was a politician from America.

Mildred M. Llewellyn, who served as an Alternate Delegate to the Republican National Convention from the state of California in the year of 1944, and who was a politician from America.

Lee Llewellyn, who served as the Burgess of Dormont, Pennsylvania in the year of 1937, and who was a politician from America.

1) Ap Griffith: (Prince of North Wales, derived from Griffith ap Cynan, King of North Wales [see that name]. Llewellyn, who was slain 10 Dec. 1282, by the forces of Edward I. m. 3 Oct. 1278, Eleanor, dau. of Simon De Montford, Earl of Leicester, by Eleanor, second dau. of King John, and left an only dau. and heiress, Catherine, mother, by her husband, Philip ap Ivor, Lord of Iscoed, in Cardigan, of a dau. and heiress, Eleanor, who m. Thomas ap Llewellyn, last Lord of South Wales, and had two daus. and co-heirs: 1) Eleanor, m. Griffith Vaughan, Lord of Glyndwrdwy, co. Merioneth; 2) Margaret, m. Sir Tudor ap Grono, Knt., and had a son, Meredith ap Tudor, father of Owen Tudor, progenitor of Henry Vll. and the Royal House of Tudor). Ap Madoc: (Baron of Cryniarth-yn-Edeirnion, co. Merioneth, Bishop of St. Asaph, 3 Edward 111. (1357); derived from Ellis, hving 22 Edward L (1284), second son of Iorwerth, Lord of Half-Edeirnion, ancestor of the Hughes’s, of Gwerclas, Barons of Kymmer-yn-Edeirnion. Llewlyn ap Madoc d. in 1335, leaving seven sisters and co-heirs, viz., 1) Lleiki, m. Grono Llwyd-y-Penwyn, of Melai, in Denbighland; 2) Anghabad, of Vaerdre, m. Madoc ap Griffith, Vir Goch of Newedd wen-yn-Llandderfel; 3) Efa, m. Griffith ap Llewellyn, of Cors-y-Gedol, co. Merioneth; 4)Myfanwy, m. Ievan Vychan, styled Y Crach, of Llanwydelyn; 5) Margaret, m. Ithel ap Gwebgened Vychan, of Rhiwaedog, co. Merioneth; 6) Nest, m. Ievan ap Y Moelwrch; 7) Mali, vi. Llewelyn AP Madoc, of Vaerdre in Edeirnion). Arms, those of the principality of North Wales, viz., quarterly, or and gu. four lions pass. guard. counterchanged.
2) ap Ynyr: (Lord of Yale, in Denbighland, second son of Howel ap Moriddio ap Sandde Hardd, Lord of Mostyn, in Denbighland. Llewelyn greatly distinguished himself at the battle of Corwen, and his valour was rewarded by his Prince, Gryffyd ap Madoc, Lord of Dinas Bran, under the following circumstances. While conversing with the Prince after the fight, Llewelyn accidentally drew his left hand, smeared with blood, across his sword, leaving four blood-stains upon it, which the Prince observing, ordered him to bear those marks henceforth on his shield, at the same time conferring upon him, as a substantial recognition of his services, the lordship of Gelligynan. The grant is dated in Yale, on the vigil of St. Egidius (probably Eligius, as remarked by Sir Sam. Meyrick in his edition of Dunn’s Visitations,” the festival falling on December 1) in the year 1256. Descendants: 1) Lloyds, of Yale, Trowyn and Voelvodig, and three branches, Lloyd, of Bodidris, in Yale, bart., now extinct in the male line; Lloyd, of Gloster, King’s co., extinct in the male line; the last of this line, Col. Hardress Lloyd, d. unm., and is now represented by Vaughan, of Golden Grove; 2) Ellises, of Brondeg and Groes Newydd). [Authorities: Reynold’s “Display of the Heraldry of North Wales, 1739,’’ Pennant’s “ Tour in Wales,” vol. 1, p. 406, &c. The first edition of the Armory makes the battle that of Crogen, but Reynolds says it was Corwen: and it is simply impossible it could have been Crogen, which was fought nearly a century before the grant made to Llewelyn. Besides, Llewelyn was certainly contemporary with Gryffyd, Lord of Dinas Bran, whose grandfather, Gryffyd Maelor, a distinguished chief, took part, along with Owen Brogyntyn, at the battle of Crogen, and died 30 years later, in 1191, the date of Crogen being 1165.] Paly of eight ar. and gu; some authorities say or, instead of ar.
3) Voelgrwn: (Main, in North Wales. Descendants: 1) Matthews, of Trefanney; 2)Parry, of Main; 3) Griffiths, of Main, 4) Morrice, of Bryn y Gwalie; 4) Davies, of Peniarth). Ar. a lion pass. sa. a bordure indented gu.
4) Aurdorchog: (Golden Torques, in Yale). Az. a lion pass. or.
5) (Edward Turberville Llewellyn, Esq.) Motto—Vincit qui patitur. Quarterly, 1st and 4th, gu. three chev. ar.; 2nd and 3rd, Turberville, chequy or and gu. a fesse erm. Crest—A lamb bearing a banner charged with a cross of St. George, a glory round the head.
6) (King of Powys). Or, a lion ramp. gu.
7) (Peterstone-super-Ely-Coedriglan, and Stoekland, co. Glamorgan). Gu. three chev. ar. Crest—A lamb bearing a banner charged with a cross of St. George, a glory round the head.
8) (Dillwyn-Llewellyn, Penllergare, co. Glamorgan). Motto—Craignez honte. Gu. on a chev. ar. three trefoils slipped of the first. Crest—A stag’s head couped ppr.
9) Per pale or and ar. three lions pass. in pale gu. Crest—A pheon ppr.
10) Per pale or and ar. three lions pass. in pale gu. Crest—A pheon ppr. 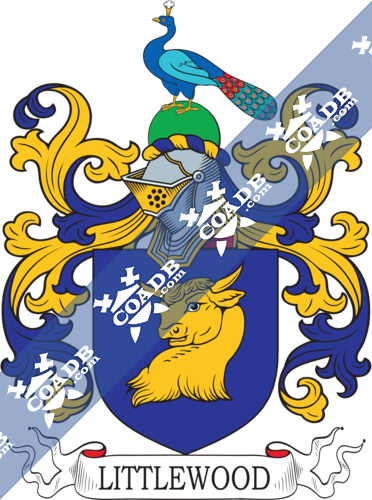 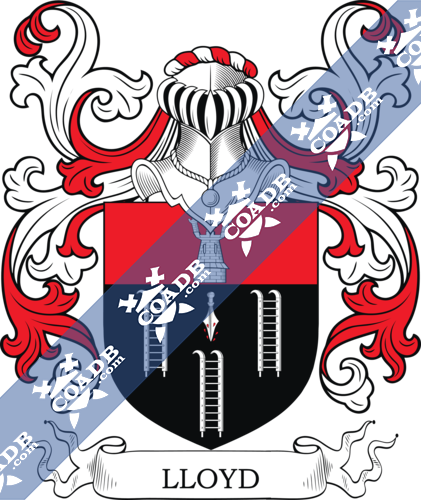