1) (co. Clare; an ancient Irish Sept, descended from Domhnal, d. a.d. 1099, son of Cumara, Chief of Maghadhair, co. Clare, from whom the surname of MacConmara, or Macnamara, is derived; John Macnamara Fionn, chief of his name, was restored to his estate 1655. and left an only dau. and heir; his brother, Donough, had two sons, Donough and Michael, who were living in France, 1714). Gu. a lion ramp. ar. in chief two spear heads or.
2) (Doolen, and Ennistymon House, co. Clare; descended from Donough Macnamara, of Moyrisk, co. Clare, brother of John Maccon Macnamara Fionn, Chieftain, 1602, whose grandson, Donal Oge Macnamara, of Ballynacraige, was grandfather of Bartholomew Macnamara, of Muraghin, same co., b. 1685, whose late representative was Lieut.-Col. Francis Macnamara, of Doolen, M.P. for Ennis). Same Arms. Crest—A naked arm embowed grasping a scymitar all ppr. Motto—Virtute et valore.
3) (Ayle, and Ranna Castle, co. Clare, and co. Dublin; descended from Finghen Macnamara, of Rosroe, co. Clare, brother of Maccon Macnamara, Chieftain, 1426; Dillon Macnamara, Esq., of Birchfield, co. Dublin, representative of this branch, d. 1838, leaving two sons: 1) Connell Wilkins, m. and had a son, Richard Francis; and 2) Patrick James Dillon, of Ayle, J. P.). Same Arms. Crest, as on the family vault in Quin Abbey, same as the last, issuing out of a ducal coronet or. Motto—Firmitas in coelo.
4) (Kilgurtin, co. Clare, and France; descended from Teige, brother of Siodha Cam Macnamara, Chieftain, 1402; allowed, 1733, to James and Francis Macnamara, then of France, sons of Denis, third son of John Macnamara, of Kilgurtin). Same Arms and Crest, without the coronet, a crescent for diff. Motto—Firmitas in coelo. 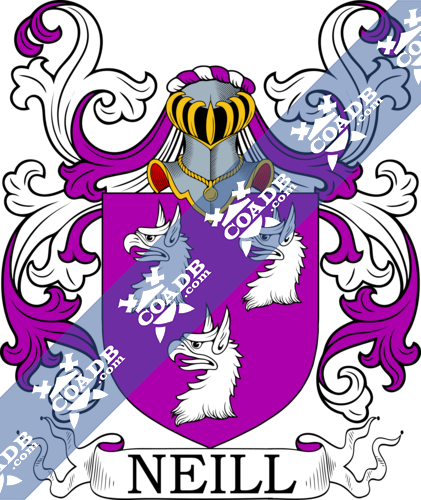