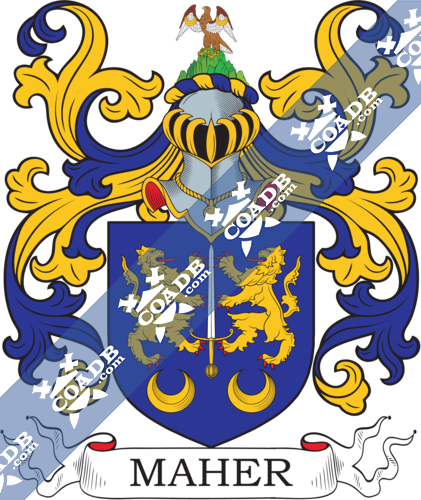 O’Meachair is an Irish surname, when translated becomes O’Maher in English eventually the ‘O’ prefix, which means son of, was dropped. The name itself translates literally into “kindly one” The Maher surname, pronounced Marr, comes from the Kilkenny and Tipperary regions of south-central Ireland with variations of the name spelled as O’Meagher, Meagher, Meager, and Mahir. In the north of County Tipperary is the Barony of UiChar’in or in English the Barony of Ikerrin. A land famed for its fighting men, and their tenacious attitudes for not giving up. The Maher family through its alliance with the Clan O’Carrol kept control of the barony all through the loss of the Ancient Kingdom of Ely and the invasion of the Normans in 1198 under Sir Richard ‘Strongbow’ de Clare. The barony was a centered around the town of Roscrea in the mountains.

The Maher family is a sept or subfamily who through ties of marriage and blood are allied to Clan O’Cearbhail or Clan O’Carrol, which is itself a sept of an even larger clan, Clan Ciannachta which by the time of the early middle ages had become dissipated by other clans and weakened through long years of strife and conquest.

It was under Cromwell’s campaign the Maher family was dislodged from their mountain fastness and experienced the first wave of the Irish diaspora. When the wars of the Irish Confederation was lost to the English, many Maher clan members went either to Kilkenny, and Waterford or took service with the Spanish Army in their Irish Brigades, who operated in the far flung corners of the Spanish Hapsburg Empire. Muster rolls show there were 33 to 34,000 Irish who enlisted in the Spanish military. Irish led, troops served in the Americas as well, with regiments being stationed in Cuba, Honduras and Mexico, with the last unit leaving Mexico near the end of the American revolution in 1781. Other countries such as France Sweden and Poland recruited heavily in Ireland, until the English passed laws against Irish citizens joining foreign armies. This finally cause the British authorities to repeal the laws banning Irish citizens from carrying arms, and then the British recruited heavily amongst the Irish.

The 1840’s saw the advent of the potato famine. Thanks to ruinous practices by absentee landlords and rent collectors, Ireland was prime for an economic and societal disaster. Catholics who made up 80% of the population of Ireland were restricted in where they could work, what type of jobs they could have, and the amount of land they were to have. The one crop they could grow was potatoes. When the blight began, the landlords saw this as an opportunity to clear more land of their tenants and replace them with a more profitable commodity, of beef. Ireland exported more food than was consumed by the natives, in fact as the famine progressed net exports actually increased. Over one million people died of starvation. Another million left home to North America , Australia and New Zealand, with an estimated quarter of a million fleeing to England, specifically London, Birmingham and Manchester having the highest concentrations of exiled Irish.

One of the more interesting members of the Meagher clan was Brigadier General Thomas Francis Meagher. Born in Waterford Ireland, who’s father Thomas Meagher had been the Mayor of Waterford in 1843/1844 and then the MP for Waterford in the 1852 and 1857 elections. His son had been a young radical Irish nationalist who had created a group called the ‘Young Irelanders’ after being captured, charged with sedition against the crown in the rebellion of 1848 he was sentenced to exile to Tasmania. He eventually escaped Australia, made his way to New York, where he worked as a lecture on the Irish condition, became a newspaper journalist and then studied for the bar.

When the Civil war broke out in 1860 he recruited heavily for the Union Army. He help to form up what would be 69th Infantry known affectionately as the “Irish Brigade.” Which would in the course of the war suffer some of the highest casualty rates of any Union army unit, because of their willingness to serve in the heaviest portion of the battle field. 1,200 men of the Irish Brigade charged the sunken road at Antietam, with just over 200 standing in formation the following day.

After the war Thomas Francis Meagher became the acting territorial governor of Montana. The gold rush of 1862 had been somewhat delayed due to the Civil war, returned in full force by 1867, when Meagher became the acting governor. He died by falling into the swift flowing Missouri river after a period of being ill. It is rumored he was killed due to his policies which were against several local interested parties who didn’t want to see the state established as that would bring too much attention to their activities and bring official taxes to large cattle and mining operations who were not being taxed in the territory.

Thanks in large part to the storied and oftentimes bloody history of Ireland Maher/Meagher family members can be found all over the globe. With large populations in America, Australia, New Zealand, South Africa and England and of course Ireland. The most common first name associated with Maher are: John, James (Seamus,) Thomas, William and Paul.

Notable people associated with the surname of Maher/Meagher:

1) (Ballinkeele, co. Wexford; confirmed to John Maher, Esq., and to the descendants of his grandfather, John Maher, Esq., of Tully-mac-James, co. Tipperary). Motto—In periculis audax. Az. two lions ramp. combatant or, supporting a sword in pale ppr. in base two crescents of the second. Crest—On a mount vert a hawk rising, belled and hooded ppr. on each wing a crescent or.
2) (Woodlands, co. Somerset). Same Arms. Crest—An eagle with wings expanded preying. 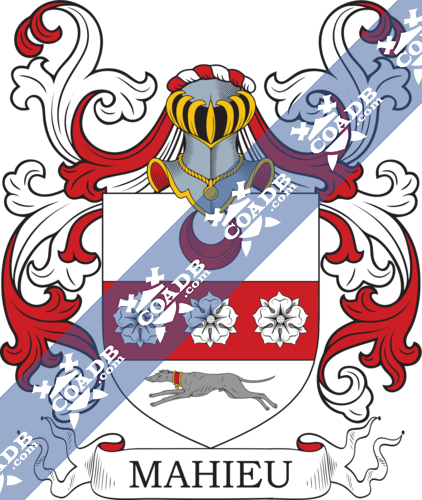