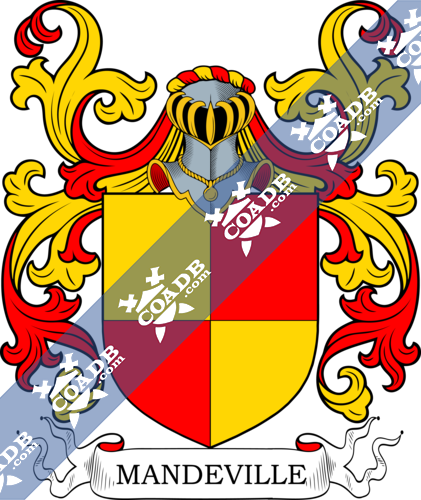 This name, with different spellings Manneville, Manville, Manvell, and Manwell, is of French geographical origin either from Manneville (seine-inferieur), Manneville (Calvados), Manneville-sur- Risle (Eure), or Magneville (La Manche). The first three places called from the Germanic particular byname Manno mentioning a (firm) man, and the Old French “Ville,” settlement, Dale and the last donated place so called from the Old French word “magne, ehich means great, and “ville,” a Valley. One, Geoffrey de Mandeville, created Earl of Essex in 1141, came from Seine Inferieur, and the Mandevilles of Earl’s Stoke and Devon hailed from Magneville (La Manche). One, William de Manevell listed in 1210, “Curia Regis Rolls of Berkshire” and a William de Manewell in the 1296 “Premium Rolls of Sussex.” In February 1671, James Manvill and Grissild Sherior married in Kirdford, Sussex, and in April 1701, Thomas Manvell, a new-born, named in St. Dunstan’s, Stepney, London.

The surname Mandeville first found in Wiltshire where they anciently gave estates by William Duke of Normandy for their help at the invasion of Hastings in 1066 AD. Geoffrey de Mandeville (c.1100) was an outstanding Domesday tenant-in-chief. He donated large estates in Essex, and in ten other counties by William, and was Constable of the Tower of London. They were given no less than 118 Lordships after the invasion.

The very first recording spelling of the family was shown to be that of Goisfridus de Magna Uilla, dated about 1086, in the “Domesday Book of Essex.” It was during the time of King William 1st who was known to be the “The Conqueror,” dated 1066-1087. The origin of surnames during this period became a necessity with the introduction of personal taxation. It came to be known as Poll Tax in England.

Many of the people with name Mandeville had moved to Ireland during the 17th century.

William de Mandeville (died before 1130), was an Anglo-Norman landowner and Constable of the Tower of London.

Bernard Mandeville (1670–1733), was a Dutch-English scholar, political economist and humorist.

Chris Mandeville (born 1965), is an American football defensive back.

John Mandeville (priest) (1655-1725), was an administrator of Peterborough, England.

Liz Mandeville was an American singer.

1) (co. Essex). Az. three wolves pass. or.
2) (co. Warwick). Or, a fret az. (another, tinctures reversed).
3) (co. Wilts). Quarterly, vert and gu. a fesse wavy betw. three trefoils counterchanged.
4) Quarterly, vair and gu. Crest—Two dexter hands conjoined supporting a scymitar in pale all ppr.
5) Vaire ar. and gu.
6) Gyronny of eight gu. and ar. an escarbuncle sa.
7) Or, on a chief indented gu. three trefoils ar.
8) Vert three wolves pass, in pale or.
9) (Reg. Ulster’s Office). Or, two bars sa.
10) (Clonmel, co. Tipperary; confirmed, 1759, as the arms of Theobald Mandevile Esq., of Clonmel, whose dau. and heiress, Mary, m. Piers Butler, son of Edmund Butler, Esq., of Edmundsbury, Queen’s co., of the house of Galmoye). Quarterly, or and gu. an escarbuncle sa.
11) (Earl of Essex; Geoffrey de Mandeville was so created by special charter of King Stephen; his descendant, William de Mandeville, sixth Earl of Essex, d. s. p. 1227, when the earldom passed, through his sister, Maud, wife of Robert de Bohun, Earl of Hertford, to that family). (second Earl of Esrex, temp. King John). Quarterly, or and gu.
12) (fifth Earl of Essex). Quarterly, or and gu. a bordure vair.
13) (Earl of Essex). Per pale or and gu. the regalia sa.
14) (co. Dorset). Gu. three lions pass. in pale ar. over all a bendlet az.
15) (Nottley, co. Essex). (co. Bucks). Ar. on a chief indented gu. three martlets or.
16) Gu. an escarbuncle nowed and flowered or.
17) (granted to Very Rev. Charles Mandeville, D.D., Dean of Peterborough, 1722). Per saltire or and gu. an escarbuncle nowed and flowered sa. Crest—A mural crown ar. charged with an escarbuncle, as in the arms.
18) Or, three bars az.
19) Quarterly, or and az. four sinister wings displ. Counterchanged.
20) Az. fretty or, a fesse gu.
21) Gu. a lion ramp. ar. 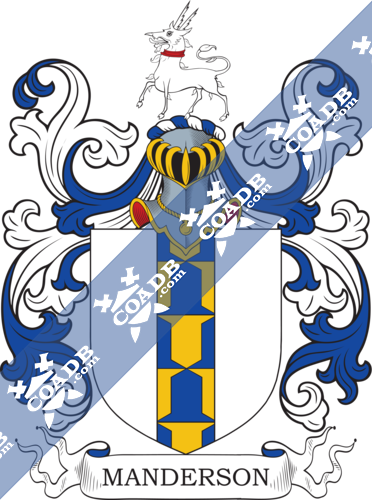 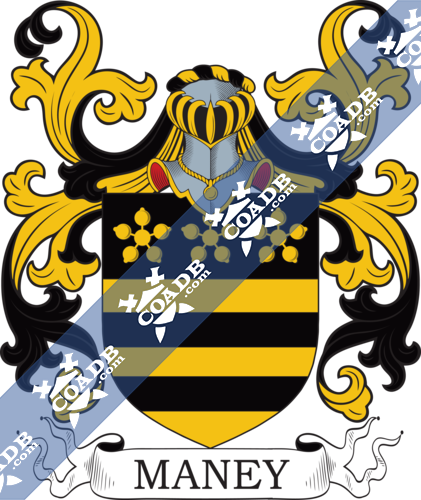