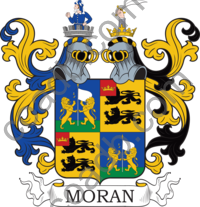 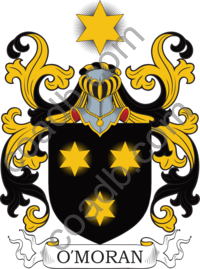 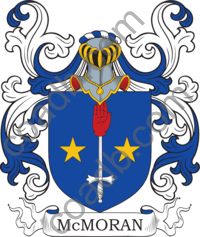 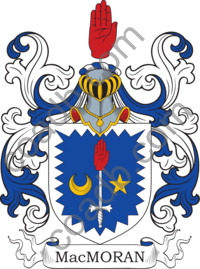 We don't yet have this section of research completed for this name. If you are interested in being notified when research becomes available, please use this form to contact us and we will let you know as soon as we have something!

1) (granted to Patrick O’Rourke Moran, Esq., of Ballinamore, co. Leitrim, son of John Moran, of Ballinamore, by Mary, his wife, dau. and heiress of Owen O'Rourke, also of Ballinamore). Quarterly, 1st and 4th, az. on a mount ppr. two lions combatant or, supporting a flagstaff also ppr. therefrom a flag ar., for Moran; 2nd and 3rd, or, two lions pass. in pale sa. on a canton gu. an ancient Irish crown of the first, for O'Rourke. Crests— 1st, Moran: Out of a mural crown a demi Saracen, head in profile all ppr.; 2nd, O'Rourke: Out of an ancient Irish crown or, a cubit arm in armour holding a scymitar all ppr. Motto—Fides non timet.
2) (a Sept in Leinster, deriving their name from Murchadhain Chief, who ruled over Magh Aoife, or Mayiffy, a district in Offaly). Sa. three stars rayed or. Crest—A star rayed or. Motto—Lucent in tenebris.
3) (Glaspine, co. Kirkcudbright). Az. betw. two mullets or, a sword in pale ar. bearing on the point a dexter hand couped gu.; otherwise, ar. three Moors' heads ppr. banded of the field.
4) (Edinburgh, 1672). Az. a sword in pale ar. bearing on the point a dexter hand couped gu. betw. a crescent on the dexter and a mullet on the sinister in fesse or, within a bordure indented of the second. Crest—A dexter hand couped gu. Motto—Virtus virtutis praemium.