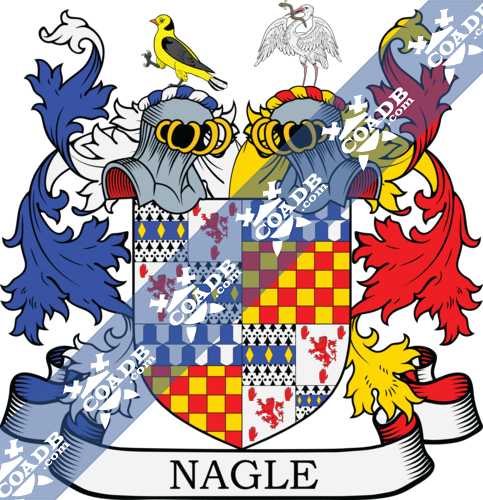 Spelling variants include Nagele, Nagel, Nagle, Neagle, Naigle, Naegle, Naigel, and Nagell. One source claims this name is a corruption of Nangle. One author notes that the name became very populated in the United States, leading him to believe there must be a second parentage. One author claims its popularity in America is due to German immigration (the same reason it is popular in Ireland). It comes from the Teutonic word for nail or spike. It comes from the Old High German and Old Saxon word nagal and Old Norse word nagal and Old English word naegel. The Anglo-Saxon name is seen in English place names such as Nailsworth and Nailstone. However, the Hibernicization de Nogla seems to point to a French origin of this surname.  Another author believes it came about as a an Anglicized form of Gaelic Mac an Óglaigh. Another author claims it was originally de Angulos, a family that entered Ireland in 1170 AD during the Norman Invasion, and occupied lands in Cork and North Connacht. Another author believes the surname is an Anglicized as MacNogly. Some evidence suggests the family lived in the Blackwater Valley in 1309 and divided into three branches by the beginning of the seventeenth century.

The family motto is Non vox, sed votum, meaning “Not the voice, but the wish”.

1) (Mount Nagle, Annakissey, and Nagle’s Borough, co. Cork; Reg. Ulster’s Office). (allowed by Hawkins, Ulster, 1770, to Gabbett Nagle, Knight of the Military Order of St. Louis, and Captain in the service of the King of France, seventh son of James Nagle, Esq., of Annakissey, co. Cork). (confirmed to Sir Richard Nagle, Attorney-General for Ireland, temp. James II.). (James-Town House, co. Westmeath, bart., extinct). Erm. on a fess az. three lozenges or. Crest—A nightingale or.
2) (granted by Betham, Ulster, to Vice-Admiral Sir Edmund Nagle, Knt., and the descendants of his grand¬father, Patrick Nagle, Esq., of Ballyduff, co. Cork). Erm. on a fess wavy az. cotised gu. three mascles or, over all on a bend of the third a sword ar. the hilt enriched with diamonds ppr. being a representation of the sword presented to him by the Prince Regent. Crest—A naval crown or, thereon a falcon with wings expanded ppr. belled and jessed or, resting his dexter claw on an anchor sa. Motto—Gratitude and loyalty.
3) (Calverleigh Court, co. Devon; exemplified to Joseph Chichester, Esq., son of Charles Joseph Chichester, Esq., of Calverleigh, who assumed the surname of Nagle by royal licence, on inheriting the estates of his maternal grand-uncle, Joseph Nagle, Esq., of Calverleigh, co. Devon, and Ballygriffin, co. Cork). Quarterly, 1st and 4th, quarterly, 1st and 4th, erm. on a fesse az. three fusils or, 2nd and 3rd, ar. a lion ramp. betw. three dexter hands couped at the wrist gu., for Nagle; 2nd and 3rd, chequy or and gu. a chief vair, for Chichester. Crests— 1st, Nagle: A goldfinch ppr.; 2nd, Chichester: A heron rising with an eel in the beak ppr. Motto—Non vox sed votum.
4) (granted to Lieut.-Colonel James Nagle). Erm. on a fesse az. three lozenges or, a chief embattled vert, thereon a sword ppr. pommel and hilt gold, surmounted in saltire by a branch of laurel, ensigned by an Eastern crown, and on a canton of the last an elephant ppr. with the word “Assaye,” sa. Crest—An Eastern crown gu. thereon a nightingale or, gorged with a wreath of laurel vert, the dexter paw supporting a banner of the second, with the word “Assaye” inscribed thereon sa.
5) Sa. a fesse betw. three towers ar. Crest—A unicorn’s head sa. 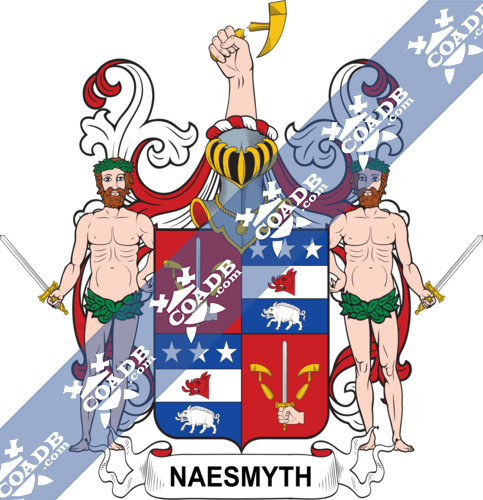 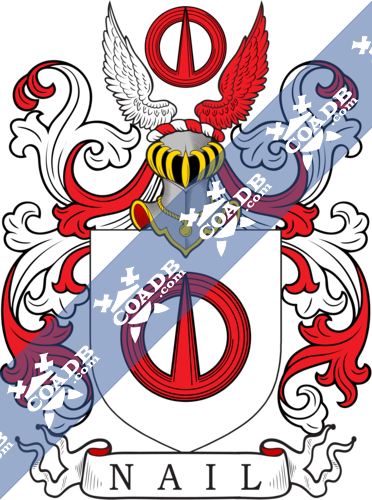