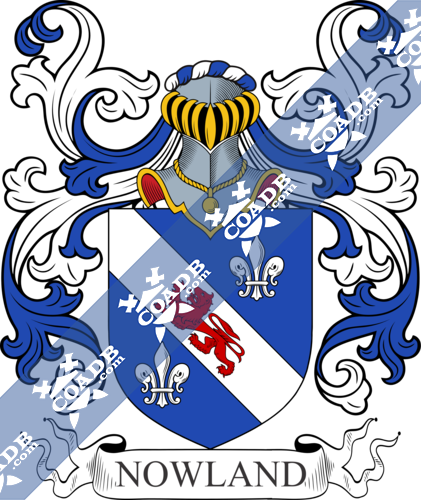 Nolan Surname Name Meaning, Origin, History, & Etymology
The last name Nolan is an Anglicized form of the Gaelic name O’Nuallain, meaning “descendant of Nuallan”, a personal (first) name derived from the word nuall, meaning “noble” or “famous”. Another source asserts the name translates as “the descendant of the crier”, perhaps referencing the first clan chief who was held the office of the herald to the Kings of Leinster, which was a hereditary position. The chief clan held the barony of Forth. John O’Nolan was granted lands by King Henry II in 1160 AD. One branch of the family went to Connacht in the 1500s where they became land owners in Mayo and Galway, whereas another branch of the Nolan family tree was located in Cork. The family supported the Irish cause and King James II (1689-1690) during the War of the Revolution and lost much of their landed possessions when their side was defeated at the Battle of Boyne in 1690. It is said many Nolans were officers in the Irish Jacobite army. Some went to France and America after the war. The Nolan family motto is Cor unum via una, which translates from Latin to English as “One heart, one way”. The first documentation of the family arms occurred c. 1660 when it appeared on a map of the city of Galway that was presented to Charles II.

Nolan of Ballinderry
The lineage or origin of the O’Nolans traces back to a man named Conn Ceadh Cathaeh. From one of his brother, named Eochaidh Fionn, descended O’Nuallain, which later became O’Nolan. The chief of the sept of O’Nolan paid homage to King Henry II of England (reign 1154-1189 AD), who granted him lands and rights. One branch of the family tree, known as the Leinster line, or the O’Nolans of Ballykeally, county Carlow, carried on their estate for several hundred years. The ancient family seat was the Castle of Ballinrobe, in Connaught, Ireland. A member of this line was Thomas Nolan, Esquire, who died in 1628, leaving a son named Gregory, his heir. There were two lines of the O’Nolan family tree: one seated at Ballinderry (as we describe below) and one in Loughboy, county mayo. The more immediate ancestry or genealogy of this family begins with Patrick Nolan, Esquire of Ballinderry, son of John, who had land grants in counties Mayo and Galway during the reign of King Charles II (1660-1685). In 1667, he married Anne, daughter of Sir John Browne, Baronet, and had issue with her, including a son named John. In 1709, John Nolan married Ellis, daughter of William Brabazon of New Park, and had a son and heir with her named Patrick. Patrick married a daughter of Martin of Tullyra Castle, and had a son named John. John married Margaret, daughter of James French of Port-a-Carron, and had a son and successor, also named John. This son, John Nolan, Esquire of Ballinderry, in 1809, married Mary, daughter of John Browne of Castle Moyle, and had a son with her named John. The son John married Mary Anne, daughter of Walter Nolan of Loughboy, in 1836, and had issue with her as follows: John Phillip, Walter Raymond (Major of the 17th Lancers), Philip, Sebastian Michael, Edward (Lieutenant in the 18th Hussars), and Elizabeth. His son, John Philip Nolan was an Esquire of Ballinderry, county Galway, Ireland, Justice of the Peace, Deputy Lieutenant, Member of Parliament, and Major in the Royal Army who was born in 1838. He was an Irish nationalist. The Nolan coat of arms or Nolan family crest is blazoned in the medieval European art of heraldry as follows: Gules, on a cross or, between four swords erect argent, pommels and hilts of the second a lion passant of the first, between four Cornish choughs sable beaked and legged of the field. Crest: A demi-lion rampant gules. Motto: Cor unum via una.

Noland from Tullow to Virginia
Daniel Nowland was born in Tullow, Carlow, Ireland c. 1574 AD. He married Anastase O’Brien, and had a son with her named Thomas. This son, Thomas Charles Nowland, was born in Mayo, Ireland in 1608. He went to colonial America where he passed away in Stafford, Virginia in 1690. It is believed he was a Catholic merchant with Royalist ties. He married Sarah Awbrey and had issue with her as follows: Pierce I, Philip, Charles, Gregory, Thomas, and Elizabeth. His son, Pierce Nowland I, was born in Dublin, Ireland in 1632 AD. He married Bridget, daughter of Anthony Cian Carroll, and had children with her as follows: Darby, Pierce II, William I, Philip, Henry Sr., and Shillman. During the Irish civil war in the 1640s, Pierce went to Fethard, a royal charter town in South Tipperary, but the town surrendered to Oliver Cromwell’s Army in 1650. Geni.com states the following: “Pierce Nowland, his wife and their young children, most likely Henry and Darby at this point, are believed to have gone to Co. Mayo sometime around 1654 where Pierce Jr. was born sometime around 1655. It is not known exactly where they lived but it was most likely in the Barony of Tirawley where Pierce Butler is known to have received lands.” He died in Maryland in 1724. Three of his sons are discussed below:
1) Pierce Noland II was born in Mayo, Connaught, Ireland in 1655. He came to colonial America with his father. He married Katherine Darrell and had issue with her as follows: Philip, Pierce Jr., Thomas, James, Darby, Henry, Joshua, Daniel, William, and Stephen Sr.
2) William Noland I was born in Mayo, Ireland in 1658. He had two issue: William II and Elizabeth. He died in St. Mary’s Maryland in 1719.
3) Henry Noland Sr. was born in Ireland in 1652. He married Lettice (surname not known) and had issue with her as follows: Henry Jr. and Richard. He died in Kent, Maryland in 1706.

Notables
There are hundreds of notable people with the Nolan surname. This page will mention a handful. Famous people with this last name include:
1) Christopher Edward Nolan (1970) is a director, producer, and screen writer born in Westminster, London, England, known for movies such as Memento, Inception, The Prestige, and The Dark Knight
2) David Fraser Nolan (1943-2010) is an American politician who is considered one of the founders of the Libertarian Party of the United States, born in Washington, D.C.
3) William Ignatius Nolan (1874-1943) was a member of the US House of Representatives from Minnesota from 1929-1933 and was the state’s Lieutenant Governor from 1925-1929
4) Bernadette Therese Nolan (1960-2013) was an Irish-English singer, actress, vocalist, and TV personality, best known for her work with the girl group The Nolans who had seven hit songs in the UK Top 20, born in Dublin
5) Ricard Michael Nolan (1943) served as a member of the US House of Representatives from Minnesota from 1975-1981, and was again elected in 2013, having previously served in the state’s House of Representatives
6) Patrick J. “Paddy” Nolan (1881-1941) was the Mayor of Ottawa, Canada from 1934-1935, born on St. Patrick’s Day
7) Owen Liam Nolan (1972) was a professional Irish-born Canadian hockey player, born in Belfast, who played in the NHL from 1990-2011, starting his career with the Quebec Nordiques
8) Mary Nolan (1902-1948) was an American stage actress, film actress, dancer, and singer, born in Louisville, Kentucky, active in the 1920s and 1930s
9) Mae Ella Nolan (1886-1973) was a member of the US House of Representatives from California from 1923-1925, born in San Francisco, the fourth woman to ever serve in the United States Congress
10) Dennis E. Nolan (1872-1956) was an officer in the US Army, born in Akron, New York, whose service (1896-1936) spanned three wars: Spanish-American, Philippine-American, and World War I, achieved the rank of Major General
11) Kevin Anthony Jance Nolan (1982) was an English football (soccer) player, born in Liverpool, who played from 1999-2018 for several different teams including the Bolton Wanders and Newcastle United
12) James Ellsworth Noland (1920-1992) was a member of the US House of Representatives from 1949-1951, born in La Grange, Missouri, who also served many years as a US District Judge

1) (co. Galway; Reg. Ulster’s Office). Ar. on a cross gu. betw. four swords erect of the last, pommels and hilts sa., a lion pass. betw. four martlets of the first. Crest—On a mount vert a falcon close ppr.
2) (Ballinderry and Portacarron, co. Galway; descended from the ancient Irish Sept of O’Nowlan or O’Nolan. Patrick Nolan, Esq., of Ballinderry, had several grants of land in cos. Mayo and Galway, temp. Charles II.; his representative, John Philip Nolan, Esq., of Ballinderry, is M.P. co. Galway, since 1874). Gu. on a cross or, betw. four swords erect ar. pommels and hilts of the second, a lion pass. of the first betw. four martlets sa. Crest—A demi lion ramp. gu. Motto—Cor unum via una.
3) (Bedford Square, London). Az. on a bend betw. two- fleurs-de-lis or, a lion pass. guard. gu. holding in the dexter forepaw a fleur-de-lis of the first. Crest—A demi lion ramp. gu. holding a fleur-de-lis or.
4) (Nowland’a Fort, co. Carlow; Reg. Ulster’s Office). Az. on a bend betw. two fleurs-de-lis ar. a lion pass. gu.
5) (Chiefs of Fotharta-Tea, now the Barony of Forth, co. Carlow, a Sept of the same race as O’More, of Leix, deriving their surname from Nuallain, Chief of the Sept). Ar. on a cross gu. a lion pass. betw. four martlets of the first, in each quarter a sword erect of the second. Crest—A martlet ar. Another Coat bears the swords points down, and the hilt of each surmounted with a martlet. See Nolan. 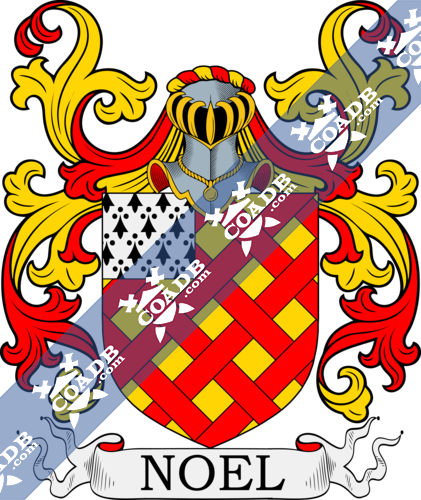 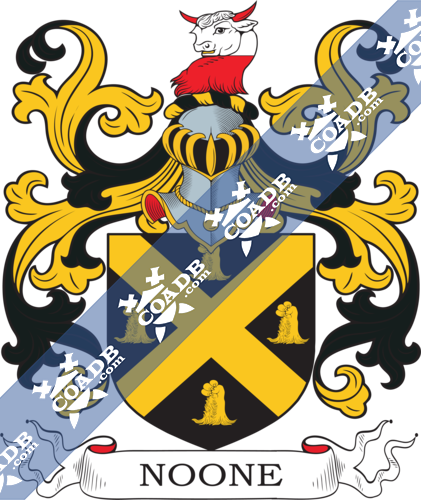