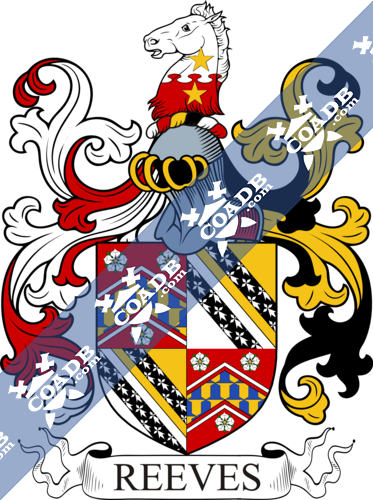 Surname Name Meaning, Origin, and Etymology
This is an official surname meaning “the reeve”, which was a bailiff (of a franchise or manor), steward, or provost.  Such offices or titles lent their designations to surname. The spelling variant Reeves is a genitive form meaning “the son of Reeve”. It comes from the Middle English word reeve, which in turn comes from the Old English word gerefa. The duty of a Reve was to levy the Lord’s rents, to manage servants, and to husband his “demeasnes to his best profit”, to govern the tenants in peace, and to lead them in war. Such servant titles were held in high regard during medieval times. Another source states it is a topographic name given to someone who lived on the edge of the woods, from a misdivision of the Middle English phrase atter eves (at the edge).

In his book, Homes of Family Names, H.B. Guppy writes “Confined to the southern half of England, and not extending north of a line drawn from the “Wash to the Mersey. Best represented in Wilts, Kent, Sussex, Suffolk, Norfolk, and Northamptonshire; but infrequent in the south-western counties”.

Early Bearers of the Surname
The Hundred Rolls of 1273 AD, a census of Wales and England, known in Latin as Rotuli Hundredorum, documents two people with this name: Sampson le Reve in county Suffolk and John le Reve in county Somerset. William le Reve and John le Reveson were documented in Kirby’s Quest during the reign of King Edward III of England. A one Sager le Reve was recorded in the Rolls of Parliament. John ate Revese was recorded in the Subsidy Rolls of Worcestershire in 1327 AD. Richard del Reves was documented in the Subsidy Rolls of Lancashire in 1332 AD. Early marriages involving this surname include William Reve to Joyce Headley in London in 1611, Elizabeth Reeve to John Trott in 1638 at Westminster, and Elizabeth Reves to James Petre in 1686 in London. Early baptisms include Ann d. William Reeves in 1729 at St. Dionis Backchurch.

History, Genealogy, and Ancestry
The famous genealogist Bernard Burke discusses three branches or lines of this family in his book “The Landed Gentry”: Reeve of Leadenham, Reeves of Besborough, and Reeves of Danemore Park.

The first branch begins with mentioning John Reeve, Esq. of Leadenam in county Lincoln who was born in 1822. He was High Sheriff in 1871 and a Lieutenant Colonel in the army. In 1857, he married Frances Willeminda, the eldest daughter of Sit Glynne Earle Welby, and had a daughter with her. His second wife was Edith Anne, the daughter of Reverend Charles Dundas, and with her had one son named John Sherard born in 1872. He traces the lineage back to William Reeve, who lived at Melton Mowbray in county Leicester during the time of the Commonwealth and possessed an estate at Leadenham through his marriage with Jane, the heiress of Ellis Key. He died in 1791 and left issue: William, Jane (1739), and Mary (1744). William was the heir and he became High Sheriff in 1808 nad married Millicent Mary King, and with her had the following children: John, William Key, Henry, Ellis, Jane, and Millicent Mary. His heir was John, who became a General in the army and Colonel of the 61st Regiment. He married Lady Susan Sherard, the daughter of the 5th Earl of Harborough, and with her had four children: John, William Henry, Susan Millicent, and Emma. John was his heir, mentioned above.

The second branch begins with mentioning Robert William Cary Reeves, Esq. of Besborough Burrane in county Clare, born in 1837, who was the High Sheriff in 1869. In 1886, he married Grace Dorothea, the daughter of Colonel Vandeluer and Lady Grace, and with her had five children: William, Grace Wilhelmina, Rose Frances, Elizabeth Mary, Shela Alice, and Eileen Rosetta. Burke traces the lineage back to Major Robert Reve, or Reeves, the son of a prominent family in Sussex, who eventually settled in Ireland during the reign of King Charles I of England. He married Elinor, the daughter of Colonel Ownt O’Dempsey, and had a son with her: William Reeves. William married Bridget Malone and with her had a son named Robert. Robert married Mary Bodley and with her had a child and heir also named Robert. This Robert married Grace Spaight and with her had the following children: Robert, Joseph, Thomas, Edward, Grace, Catherine, and Jane. The eldest son was Robert Reeves, Esq. of Platten in county Meath who married Mary Maunsell of Limerick and with her had issue: Robery, William, Samuel, Edward, Richard, Joseph Robert, Bridget, Grace, and Mary, before he passed away in 1835. He was succeeded by his second son William Maunsell Reeves, born in 1788. In 1828, he married Rose, the daughter of Robert Conway Dobbs, and had children with her: Robert William Cary (1840), Conway Richard (1840), William Maunsell (1843), Wilhelmina Josepha, Mary Winthrop, Charity, and Rose Emily. William died in July of 1857. 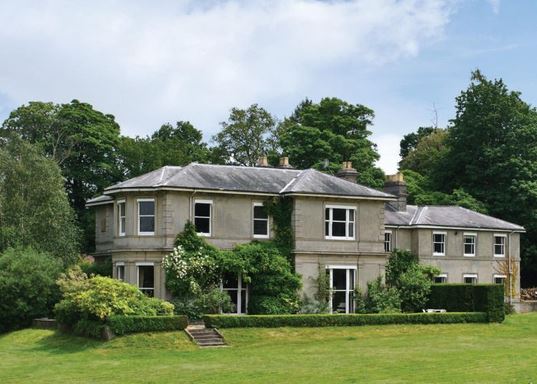 The third branch trances back to John Bowles, the son of Thomas Bowles (born 1657), who married Mary Carrington and had a son with her name Carrington Bowles. Carrington married Anne Field and with her had a son named Henry Carrington Bowles, who married Anne Garnault. They had a daughter named Jane Mary Bowles. She married James Reeves, Esq. of Danemore Park and had issue with her: James Bowles, Jane Fanny, Elizabeth Anne, Anna Maria Emily, and Caroline Harriett. James was the heir and succeeded his father in April of 1868.

Early American and New World Settlers
Joseph Reeve came to New England aboard the Christian in March of 1634. William Reeve came to New England aboard the Elizabeth in April of 1635. Thomas Reeve left the port of London in May of 1635 and went to St. Christopers aboard the Mathew. A Nathaniel Reeue or Reeve was recorded as living in Virginia in 1623 “att ye Neck of Land”. Other settlers include: Leonard Reeves (Virginia 1638), Rachel Reeves (Virginia 1701), and Mary Reeves (Maine 1830). 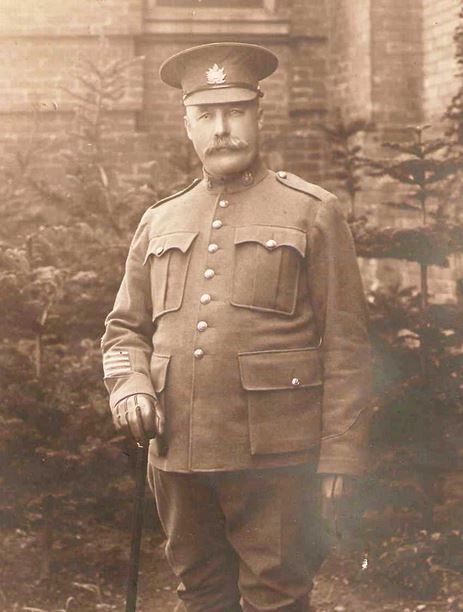 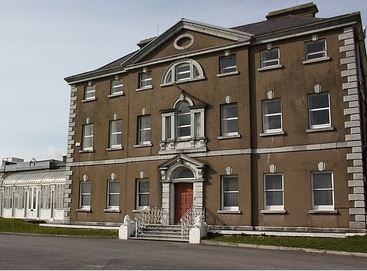 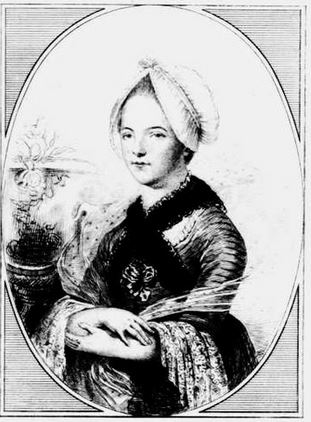 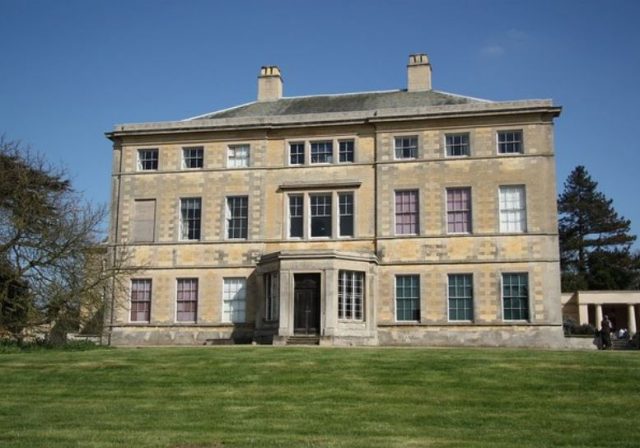 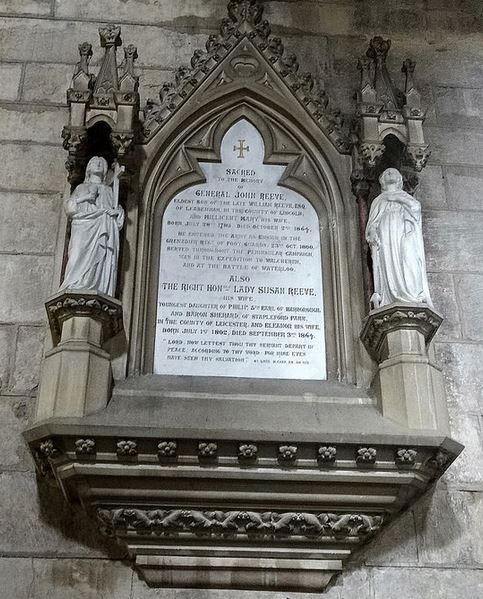 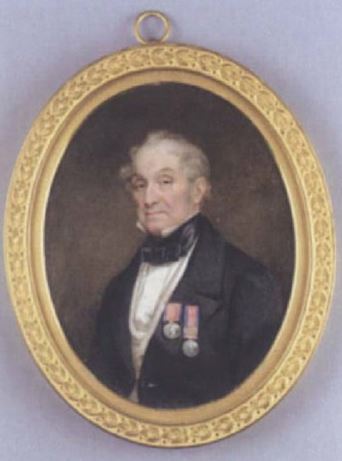 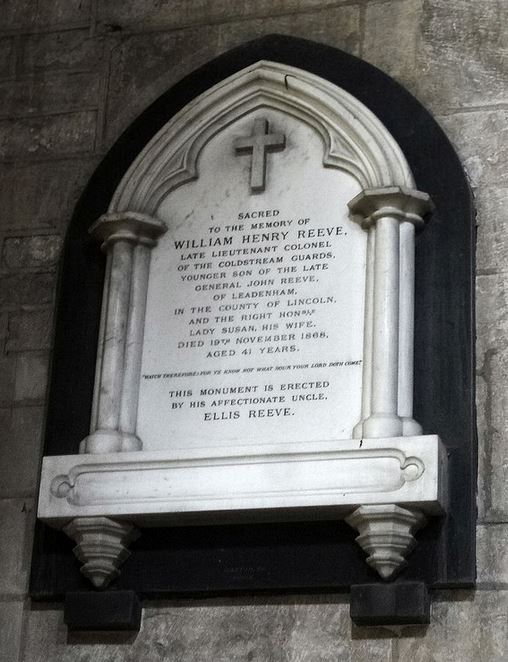 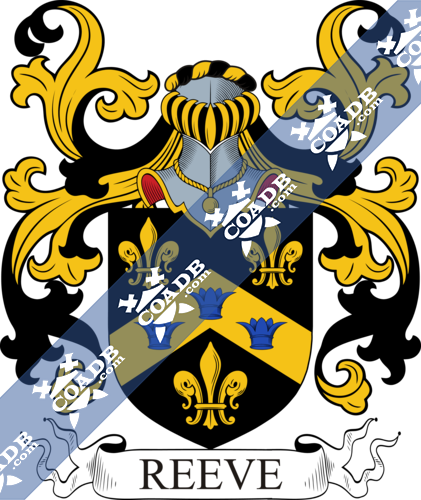 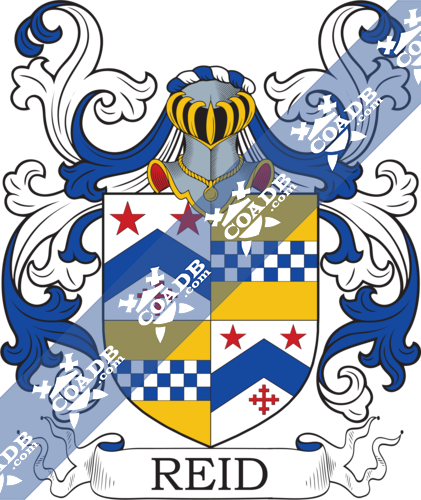