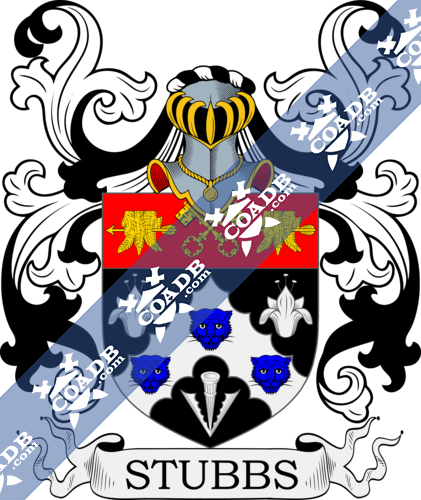 1) (Lawrence Stubbs and Richard Stubbs, 1525; arms in the chapel, Balliol College, Oxford. Visit. Oxon, 1574). Sa. on a chev. engr. betw. in chief two lilies, and in base a pheon ar. three leopards’ faces az. a chief gu. charged with two keys saltireways betw. as many trunks of trees eradicated and couped or, pierced through with an arrow of the second.
2) (London). Sa. on a bend or, betw. three pheons ar. as many round buckles gu. Crest—A demi eagle displ. ar. holding in the beak an acorn slipped vert, fructed or.
3) (co. Durham). Sa. on a bend or, betw. two pheons ar. three buckles of the field. Crest—On a mural crown sa. a pheon ar.
4) (co. Hertford). Sa. on a bend betw. three pheons or, as many buckles gu.
5) (Stanford, co. Lincoln). (Water-Eaton and Bloxwich, co. Stafford; settled time immemorial at the latter place; Humphrey Stubbs, Esq., temp. William IV., left four daus. co-heirs to their uncle, Matthew Stubbs, Esq., of Water-Eaton. viz., Elizabeth, wife of James Rann, Esq., of Ladywood; Mary, wife of the Rev. Jonas Slany, of Bescot Hall; Martha, wife of Joseph Brearley, Esq., of Newinn Hall; and Lucy, wife of Thomas Devry Wightwick, Esq.). Same Arms. Crest—A demi eagle displ. or, in the beak a laurel branch vert.
6) (Kettel Hall, Oxford; Rev. William Stubbs, Canon Residentiary of St. Paul’s, Lundon, and Regius Professer of Modem History). Sa. on a bend nebuly or, betw. two bezants, each charged with a pheon of the field, three round buckles also sa. Crest—A demi eagle displ. sa. each wing charged with a pheon, and transfixed through the mouth with a tilting spear palewise or.
7) (Rev. Philip Stubs, M.A., Archdeacon of St. Albans, temp. George I.). Sa. on a bend or, betw. three pheons ar. as many fermaulx gu. Crest—A demi eagle displ. or, to the beak an oak branch ppr.
8) (Warrington; Peter Stubs, Esq., J.P., Ac., Statham Lodge, co. Chester). Or, three piles, two issuant from the chief and one from the base az. each charged with a pheon of the field. Crest—Issuant from flames a dexter arm embowed in armour grasping a battle axe all ppr. pendent from the hand by a chain or, an escutcheon sa. charged with a pheon, as in the arms. Motto—Cedant arma labori.
9) (Laxfield, co. Suffolk). Sa. on a bend betw. three pheons ar. as many round buckles of the first. Crest—A stag’s head ppr. betw. the attires a pheon ar.
10) (exemplified by Hawkins, Ulster, 1707, to Captain Robert Sewell, of Major-General Tidcombe’s Regiment, son of Robert Sewell, Esq., of Heny, co. Essex, Gentleman of the Privy Chamber to Charles II., upon his taking the surname of Stubber). Quarterly, 1st and 4th, erm. on a pile sa. an heraldic antelope’s head erased or, for Stubber; 2nd and 3rd, ar. on a bend gu. three martlets of the first, a crescent for diff., for Sewell. Crest—On a mural crown gu. a martlet ar.
11) (Thomastown, co. Kilkenny; exemplified to Rev. Alexander Chetwood Hamilton, of Thomastown, on his assuming, by royal licence, 1824, the surname and arms of Stubber, in lieu of Hamilton). Erm. on a pile sa. an heraldic antelope’s head erased or. Crest—On a mural coronet gu. a martlet close ar.
12) (co. Essex). Az. on a chev. betw. three estoiles or, as many lozenges sa. Crest—An arm embowed vested barry of ten ar. and az. holding in the hand ppr. a lighted match of the first, fire of the third.
13) Per pale ar. and sa. three lions’ heads erased ermines and erm. counterchanged, a border engr. counterchanged of the second and first. Crest—A tiger pass, per pale ar. and sa. 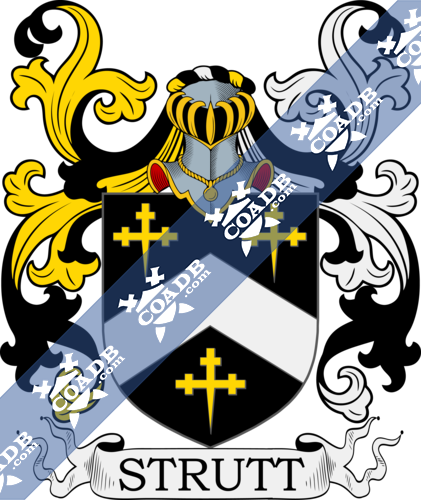 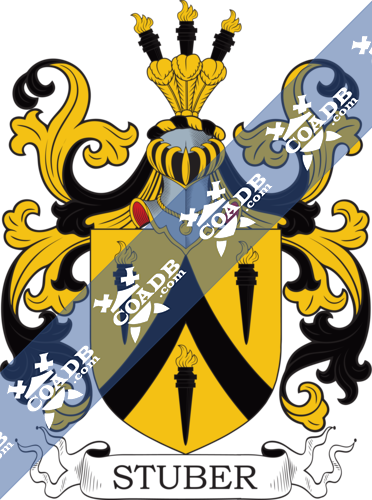