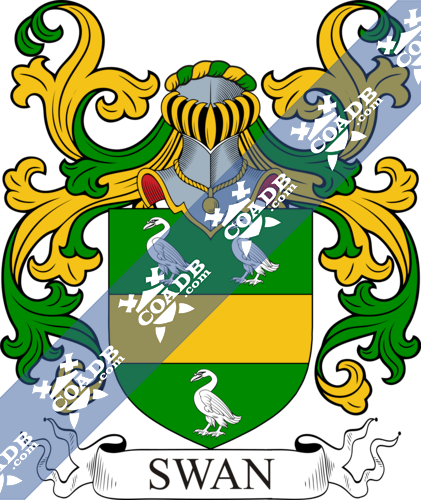 Surname Name Meaning, Origin, and Etymology
This Anglo-Saxon name has three origin theories. First, it is a baptismal surname meaning “the son of Swan or Swain”. Second, it derives from the nickname “the swan”, referring to a person who was swan like (physically resembled a swan, graceful, or a person of purity/excellence). Third, it was a local name meaning “at the Swan”, which was an early sign-name (of an inn, alehouse, or a generic house name). It should be noted that many British surnames are based on birds: Dove, Raven, Swan, Finch, Sparrow, Hero, Jay, Wren, Peacock, and several others. One source states it was originally a Danish surname, Swane, meaning a swan, from the word Swain, meaning a servant, pastoral servant, youth, or herdsman. One source claims the name became popular in Scotland when Vikings arrived there.

In his book, Homes of Family Names, H.B. Guppy writes: “The ancient name of Swain, which is now best represented in Lincolnshire, Leicestershire, Derbyshire,, and Devonshire, was established in the form of Sweyn, rarely of Swayn, during the 13th century in Lincolnshire, Norfolk, Cambridgeshire, and Oxfordshire, being most numerous in the last two counties. In the east of England it is probable that, Swain is but the old Danish name of Sweyn. In, the time of the English Harold, his elder brother bore the name of his maternal uncle, Sweyn, King of Denmark”.

In his book, Patronymica Britannica, Mark Anthony Lower writes the following about the surname Swan: “The bird was famous in old heroic times, both as a dainty of the table, and as a heraldric badge. Edward III used to swear by it.”

Early Bearers of the Surname
The Domesday Book of 1086, which was a census of England and Wales dictated by William the Conqueror, documents the following personal names: Suua, Suan, Swen, and Swain. Sweyn Forkbeard was King of Denmark, England, and certain parts of Norway, who lived from 960-1014 AD.

History, Genealogy, and Ancestry
The famous genealogist Bernard Burke’s book “Peerage and Knights” discusses the surname Swann. It begins with mentioning Sir Charles Duncan Swann, 2nd Baronet, who was of Prince’s Gardens, Kensington, and educated at Balliol College. He was born in 1879 and he succeeded his father in 1929. He married Dorothy Margaret, daughter of Captain R.H. Johnson, in 1909 and had two issue with her: Guy Charles (1910 and Anthony Charles Christopher (1913, who served in Wordl War II in Major King’s African Rifles, and he had a son named Michael Christopher in 1941). Burke traces the lineage to John Frederick Schwann, of Gloucester Square, who married Henrietta, daughter of Reverend Kell. They had issue, including the Right Honorable Sir Charles Ernest Swann, 1st Baronet, who was born in 1844. He was a Member of Parliament for North Manchester between 1866-1918. He was created a Baronet in 1906 and was sworn to the Privy Countil in 1911. He married Elizabeth Duncan in 1877 and had several children with her: Charles Duncan (previously discussed), Harold (1880), Laurence Averil (1881), and Geoffrey (1883). Geoffret was educated at Westminister School and served in World War I. In 1911, he married Florence Mildred, daughter of John Brodie of Hamsell Manor in Eridge, and had issue with her: 1) Kenneth Geoffrey (1915), Janet Elizabeth (1913), Phyllis Mildred (1919), and Kathleen Mary Produce (1921). The family resided at St. James Court, Buckingham Gate. 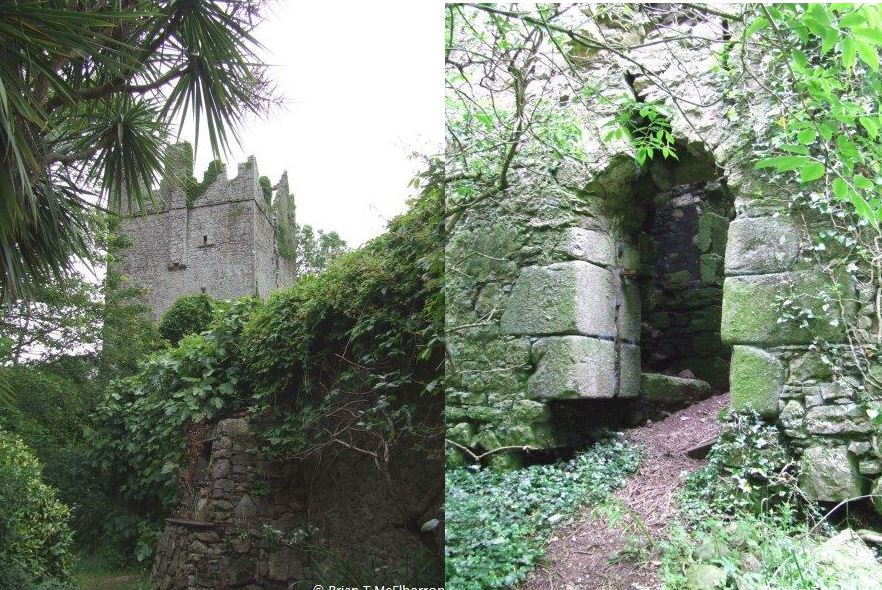 Burke’s other book, “The Landed Gentry” discusses two branches of this family: Swan of Baldwinstown and Swann of Askham Hall. The first begins with a discussion of Richard Waddy Swan, Esq. of Baldwinstown, in county Wexford. He was a Barrister-at-Law and in 1839 he married Barbara, the daughter of Sandham Symes, Esq. of Hillview. They had the following issue: Percival Symes (1841, married Elizabeth Sarah in 1877), Richard Sandham (1844), Joseph Percival (1847), and Barbara (died 1847). He later married Mary, daughter of Alexander Stewart of Wicklow, and had issue with her: Stewart Fitzalleyn (1875) and Mabel Stewart. Burke traces the lineage back to John Swan (son of Thomas Swan), who went to Ireland in with the military under the Early of Sussex during the reign of Queen Elizabeth I of England. He died in 1609 leaving a son: William Swan. William married Maude, daughter of Whittey, and died in 1637 leaving two sons: David and John. John Swan, Esq. received in 1657 Baldwinstown and other lands from King Charles II. He married a woman named Mary and died in 1672. He left behind a son, also named John. This John married Sarah, the daughter of Richard Rowe of Ballharty, and died in 1684 leaving a son: also named John. This John married Catherine, the daughter of John Chamney, and died in 1712, leaving a son with her, also named John. This John married Anne Lamber and had three issue with her: 1) John, 2) Joseph of Tombrean (1730), and 3) Elizabeth (married Edward Crutchley of Wicklow). He died in 1720 and was succeeded by his eldest son and heir, John Swan. This John married Barbara, daughter of Percival Hunt of Dublin, in 1748 and had issue with her: John and Joseph. John was the heir, but died in 1783 and was succeeded by his brother Joseph.  Joseph was born in 1755 and married Anne, daughter of Joseph Swan of Tombrean, and had  three sons and four daughters with her: 1) Percival, 2) William (married Thomasina Eleanor Reade), 3) Benjamin (born 1797 who was an officer in the British service and married Anne Reky), 4) Catherine, 5) Barbara (married Thomas Atkinson), 6) Anne (married Sandham Symes in 1829), and 7) Margaret (married Cadwallader Waddy of Kilmacow).He passed away in 1799 and was succeeded by his eldest son Percival. Percival married Penelope, daughter of Richard Waddy, in 1807. They had four children together: Joseph Percival, Richard Waddy, Anne (married General Edmund Neal Wilford), and Penelope Katherine. He passed in 1834 and was succeeded by his eldest son Joseph Percival Swan. Joseph was a Major 3rd Royal Middlesex Militia and married Catherine Rhoda, daughter of Benjamin Riky, in 1841. He died in 1876 and was succeeded by his brother, Richard Waddy Swan (previously discussed). This family bore the following blazon: Azure, on a fess wavy argent between three swans rousant proper crowned or, a trefoil vert. Crest: A swan rousant proper crowned or, charged with a trefoil vert.

The second branch Burke discusses is Swann of Askham Hall. It begins with a mention of Robert Swann, Esq. of Askham Hall in count York, who was born in 1832. In 1859, he married Blanche Maria, daughter of Sir John V.B. Johnstone and they had two children together: Edward John (1863) and Mabel Georgiana. Burke traces the lineage of this family  to gentlemen so lived during the reign of King Richard II of England (1377-1399). Robert Swann was born in 1759, son of John Swann and Miss Turner, and he married Ursula, daughter of Robert Carr of Horbury, and had issue with her prior to dying in 1852: John, Reverend Robert (Rector of Brandsby and Vicar of Cherrt, born in 1798, who married Jane Cornelia Anne Percival in 1832 and had a son named Percival Fiennes born in 1839), and Mary (married Henry Ramsden in 1821). He died in 1852 and was succeeded by his eldest son, John Swann, Esq. of Askham Hall, J.P. for the city of York, who was born in 1793. In 1830, he married Catherina Elizabeth, daughter of Colonel William Thomlinson, and later Georgiana Charlotte, daughter of Henry Dixon. He left five issue with his first wife: Robert (previous discussed), John Thomlinson (Commander of Royal Navy, born 1836), Catherine Sarah (married John Thomas Cator in 1860), Henrietta Mary (married John Champion Hicks in 1866), and Frances Anne (married Reverend Christopher Wybergh in 1867). This family bore the following blazon: Azure, a chevron ermine between three swans argent, Crest: A demi-talbot salient gules collared or.

Early American and New World Settlers
A one Joseph Swann left the port of London in 1635 aboard the Globe to Virginia. A one John Swan, master of Hope of Amsterdam, was recorded as being buried in the parish of St. Michael’s in the Barbados in March of 1678. Peter Swaine and his wife were recorded in the parish of St. Michaels in 1680 (recorded as having three children and one servant). Other early settlers included Richard Swan (Boston 1634), Jonathan Swan (Virginia 1635), Mary Swan (Virginia 1703), and John Swan (Maryland 1766).

Notables
Famous people with this last name include: 1) Joseph Swan (1828-1914) a British chemist and physicist who helped develop the incandescent light bulb, 2) James Swan (1903-1977) who was an Australian politician who became the mayor of the city of Brisbane, and 3) Barbara Swan (1922-2003) who was an American artist from Massachusetts. 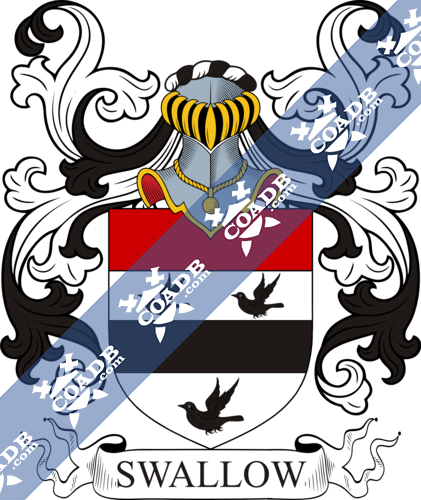 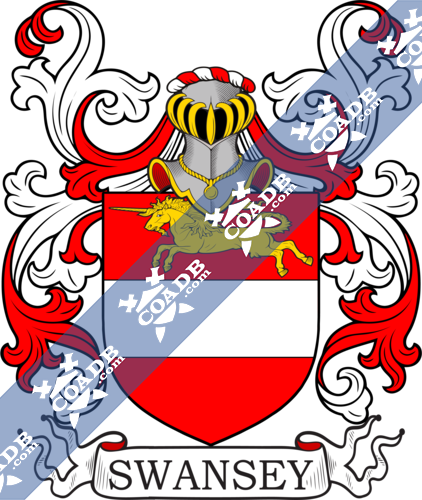