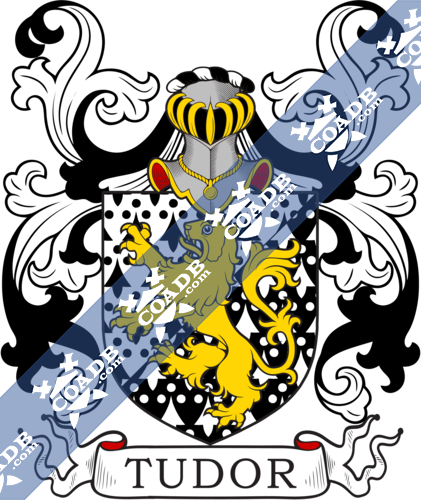 Owen Tudor who was the lover or could also be the second husband of Catherine of Valois.

Jasper Tudor was the father of king Henry VII, he was also the first duke of Bedford.

Arthur Tudor who was the eldest heir of king Henry VII and who predeceased his father.

Margaret Tudor (1489 – 1541) was queen of Scotland. She was born at Westminster Palace and is the eldest surviving daughter of King Henry VII of England and Elizabeth of York.

Cristian Tudor is a Romanian footballer.

William Tudor (1750–1819) He was a founder of the Massachusetts Historical Society and before that he was an Attorney-at-Law who served their as a Representative of Boston in the Massachusetts General Court, State Senator, Secretary of the Commonwealth.

Frederic Tudor (1830 – 1864) he was an American entrepreneurial based in Boston and also was known to people as the ‘Ice King’ of Boston because of his mega Tudor Ice Company.

1) (Tudor Trevor). (Lord of Hereford, Whittington, and both Maelors; founder of the Tribe of the Marches, surnamed Trevor, from the place of his birth, co. Denbigh, son of Yntb ap Cadforch, Lord of Whittington and both Maelors, in Powys, by Rheingar, his wife, dau. and heir of Lluddoca Ap Caradoc Vreicdfras, Lord of Hereford, in South Wales. From Tudor Trevor, who d. 948, descend Trevor, of Brynkynalt and Trevallyn, co. Denbigh ; Trevor, Baron Trevor and Viscount Hampden; Trevor, Bart., of Enfield; Trevor, of Ross Trevor, co. Down; Trevor, Viscount Dungannon; Mostyk, of Mostyn and of Bryngwyn, Geyreuld, Bodscallan, Talacre, and Kilken; Edwards, of Chirk: Lloyd, of Leaton Knolls, and of Penley; Pennant, of Penrhyn Castle, Bychton, and Downing; Lord Penrhyn Dymock, of Penley; Eyton, of Eyton, and of Rhuabon; Wynne, of Eyaith and of Gwerninwawr; Edwardes, of Shrewsbury; Vaughan, of Burlton; Yonge, of Bryn Yorcin; Young, of Kingerby; Broughton, of Broughton; Jones, of Llwynon; Jones-Parry, of Plas-yn-Yale; Jeffreys, of Wem; Lloyd, of Berthllwyd, &c.). Per bend sinister erm. and ermines a lion ramp. or.
2) (Earl of Richmond, merged in the Crown 1485; Sir Owen Tudor, of ancient Welsh descent, m. Katherine, Queen Dowager of England, and widow of Henry V., by whom he had two sons: 1) Edmond, surnamed of Hadham, created by his half-brother, Henry VI., Earl of Richmond, 1452; 2) Jasper, surnamed of Hatfield, Duke of Bedford. Henry, second Earl of Richmond, only son of Edmond, first Earl of Richmondd, by Lady Margabet Beaufort, only dau. of John, Duke of Somerset, and great-grandson of John of Gaunt, Duke of Lancaster, having ascended the throne as Henry VII., the earldom merged in the Crown). (Duke of Bedford, extinct 1495; Jasper Tudor, second son of Sir Owen Tudor, by the Queen Dowager of Henry V., was created by his half-brother, Henry VI., Earl of Pembroke, 1453, and by his nephew, Henry VII., Duke of Bedford, 1485, d. s. p.). Quarterly, France and England, a border az. charged with eight martlets or. Crest—On a chapeau gu. turned up erm. a lion statant guard, and crowned all or, gorged with a plain collar az. thereon three martlets gold.
3) (Prince of Wales; arms of Arthur, Prince of Wales, eldest son of Henry VII., d. v. p., as they aprear in St. Mary Church, Oxford. Visit. Oxon, 1566). Quarterly, France and England, a label of three points ar.
4) (Duke of York; arms of Henry, Duke of York, afterwards Henry VIII., second son of Henry VII., as they appear in St. Mary Church, Oxford. Visit. Oxon, 1566). Same Arms, a label of three points ar. each point charged with an erm. spot sa.
5) (ap Griffith Vychan) (Lord of Gwyddelwern, in Merioneth, second son of Griffith Vychan, Lord of Glyndwrdwy, in Merioneth (representative of the Princes of Powys-Fadoc,) and brother, and eventually heir male of Owen Glendower. Tudor ap Griffith was upwards of 24 years old, 3 Sept., 10 Richard II., when, under the designation of “Tudor de Glendore,” he appeared as a witness in the Scrope and Grosvenor Controversy; his dau. and heir, Louisa, m. Griffith ap Einion, of Cors-y-Gedol, co. Merioneth, ancestor by her of: 1) Vaughan, of Cors-y-Gedol, co. Merioneth; 2) Yale, of Plas-yn-Yale, co. Denbigh; 3) Rogers, of Bryntangor, co. Denbigh; 4) Lloyd, of Rhaygatt, co. Merioneth). Arms of Griffith Vychan, Lord of Bromfield, eldest son of Madoc, last Prince of Powys-Fadoc , viz., Paly of eight ar. and gu. a lion ramp. sa.
6) (Tudor Vychan) (Penmonydd, co. Anglesey). Gu. a chev. betw. three men’s heads in profile ar.
7) Az. a lion ramp. or. Crest—On a mural crown or, a serpent nowed vert.
8) (granted by James II., 4 Aug. 1687, to Mary Tudor, illegitimate dau. of Charles II.). The royal arms of England as borne by James II., within a border, quarterly, erminois and counter-compony ar. and gu. 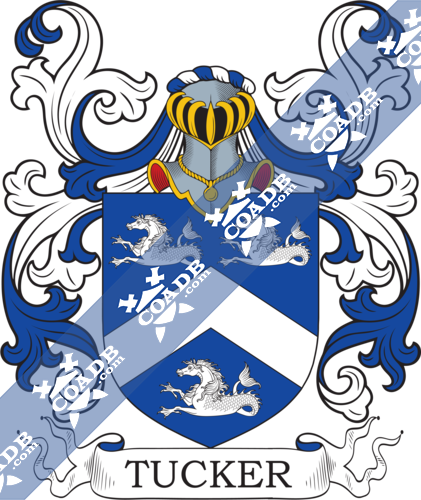 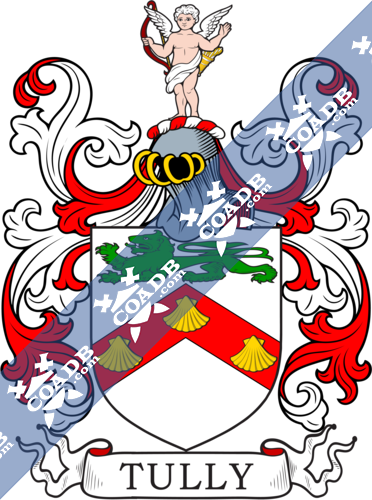