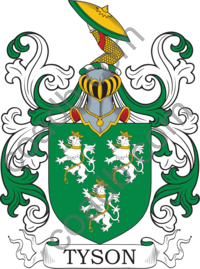 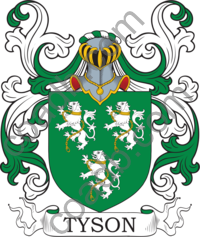 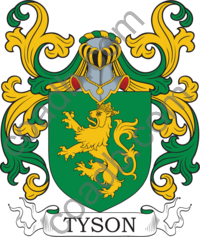 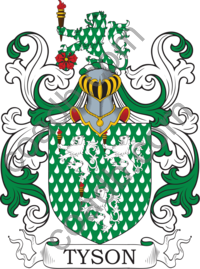 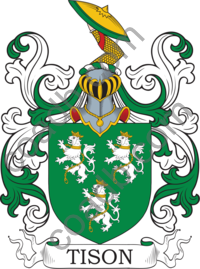 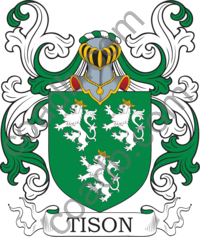 Origin, Meaning, & Etymology
The surname English surname Tyson has several origin theories. First, it might be a varied spelling of the surname Dyson, a chiefly Yorkshire name that is a metronymic of the pet name Dye (or Ty) itself from medieval female personal name Dennis, coming from the Latin person name Dionysisu, meaning a follower of the Greek goddess.

Second, it could have developed as a nickname for a person with a fiery temperament, from the Old French word tison, meaning “firebrand”.

Third, it is an Americanized spelling of the German surnames Theissen or Theisen.

A fourth theory is that the name means “son of Tys”, with Tys being a pet form of the masculine given name Matthias, popular among the Dutch, meaning one who kindles strife of mischief.

The name was popular in Cumberland, where it is thought to have come from Scotland.

The Tessons were said to have possessed one-third of Normandy, France. The name of the family was originally Ticio, and they were seated in the vicinity of Angouleme where they distinguished themselves in war against the Saracens around the year 725 AD. They were afterwards seated in Anjou.

A member of this family named Ralph led 120 knights of his  barony to aid Duke William at the Battle of Valdes Dimes n 1047, for which he was created the Viscount of the Cotentin. Ralph also founded the Abbey of Fontenay, near Caen, and from him descended the Tesson family of the Middle Ages.

Gilbert Tyson (or Tesson) and his brother obtained the Barony of Alnwick from King Edward (reign 1042-1066) the Confessor, but he died at the Battle of Hastings. Gilbert had a son named Gilbert who held vast estates in York, Lincoln, and Nottinghamshire.

Adam Tyson granted lands to the Hospitallers during the reign of Richard I (1189-1199).

Edward Tyson (1651-1708) was a British scientist and physician, regarded as the founder of comparative anatomy. He was born in Clevdon, Somerset, the son of Edward Tyson. He graduated from both Oxford and Cambridge and was admitted in the College of Physicians in 1680, and was elected a Fellow of the Royal Society in 1679.

Reverend Michael Tyson, born 1740, became the Rector of Lambourne in Essex in 1776, and he died in 1780. He was an author, draughtsman, and engraver. He was the son of Michael Tyson (d. 1794), the dean of Stamford and archdeacon of Huntington, and Elizabeth Curtis. He had one son, Michael Curtis Tyson (1779-1794), who inherited his mother’s manors of Barholm and Stow-cum-Deeping in Lincolnshire.

Jacob Tyson (1773-1848) was an American lawyer and politician from New York. He served in the U.S. House of Representative from 1823-1823 as a member of the Crawford party. He was the son of Isaac Tyson and Esther Shoemaker. His great-grandfather, Reiner Theissen, was born in Krefeld, Rheinland-Pfalz, Germany in 1659 and arrived in Philadelphia, PA in 1683, having traveled their aboard the Concord.

Francis Tyssen, of Ghent Flanders, afterwards of Flushing, Zealand, had a grandson, also named Francis, who was a merchant and moved from Flushing to London, England. He was naturalized by an act of Parliament and was a Deputy Lieutenant of Tower Hamlets in 1689. He married Dorothy Collent or Calant and had issue with her, including a son named Francis, born in 1687. This family became seated at Northwold Lodge, Brandon, Norfolk, England. Their arms are blazoned as follows: Quarterly, 1st and 4th, Tyssen: 2nd and 3rd, Danuel. Crests: 1st Tyssen; 2nd Daniel: Mottoes: For Tyssen, post mortem virtus cirescit, and for Daniel, Toujours pret.

Francis Tyssen of London, an Aldermann and Sheriff, was granted a coat of arms by H. St. George on November 24th, 1687.

Edward Thomas Tyson, Esq., born 1847, was a Justice of the Peace for Cumberland. He was the son of Edward Tyson, gentleman, and Isabella Birkett.