This unusual surname, listed with various spellings such as Abraham, Abrahams, Abrahamson, the next two being nicknames, and the shortened Abrams, also a possible patronymic, is a 12th-century origin, and a ‘Crusader’ that was brought into Britain. So, it was not Jewish, though of Hebrew influence. It is one of a group like Isaac, Joseph, and Abel, which was given to the coming Christian fighters to their sons for identification of their ‘visit’ to the Holy Land. These frequently advanced into English surnames in their own right. ‘Abraham’ converts as ‘The father of the nation’, and was so produced by the first of the Jewish male head, (Genesis 11-25). The 1086 Domesday Book for London relates to ‘Abraham,’ a bishop in the established (Christian) parish, while in 1170 Abraham de Stradtuna listed in the Danelaw Rolls of Lincolnshire. As a Jewish surname, it was recovered after the ‘reign’ of Oliver Cromwell (1649 – 1658), who in 1655 abolished the exile order of Edward I in 1290, and allowed the resettlement of the Jewish people in Britain.

The surname Abrahams first appeared in Balfeth, in Scotland, in 1163, where Adam Abraham, priest of Dunblain, held vast lands. More south in Lancashire, the township of Abram was home to another section of the family.

The very first recording spelling of the family was shown to be that of John Abraham, dated about 1197, in the “Pipe Rolls of Northamptonshire,” Huntingdonshire. It was during the time of King Richard I, who was known to be the “The Lionheart,” dated 1189-1199. The origin of surnames during this period became a necessity with the introduction of personal taxation. It came to be known as Poll Tax in England.

Many of the people with surname Abrahams had moved to Ireland during the 17th century.

Some of the people with the surname Abrahams who settled in the United States in the 18th century included Solomon Abrahams, who landed in Jamaica in 1745.

The following century saw many more Abrahams surnames arrive. Some of the people with the name Abrahams who settled in the United States in the 19th century included Jacob Abrahams landed in New York in 1812. Elias Abrahams landed in Charleston, South Carolina in 1821. John Abrahams, T Abrahams, both arrived in San Francisco, California in 1850. S Abrahams arrived in San Francisco, California in 1851.

Some of the people with the surname Abrahams who settled in Canada in the 18th century included Israel Abrahams landed in Halifax, Nova Scotia in 1749.

Abraham Abrahams (1813-1892), was a South Australian businessman and art expert.

Lozengy or and gu on a chief sa. the sun in his splendour or. Crest—A cap of maintenance decorated with a plume of ostrich feathers, all ppr. Another Crest—The sun rising from a cloud ppr. 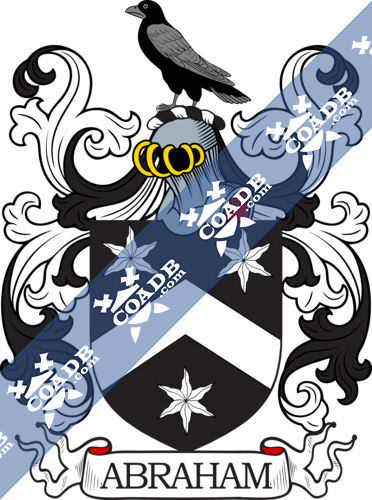