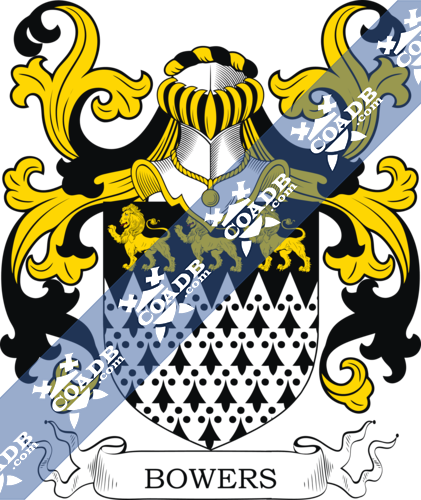 Meaning, Origin, Etymology
The surname of Bowers is a patronymic surname with many possible origins but they are all of an Anglo-Saxon and Anglo-Celtic originations dating prior to the 8th century.   One possible meaning from the word ‘bur’ that means ‘a chamber, a cottage, or a shady recess’. This origin would make it a geographical locality derivative ‘of the bower’ which was an indoor servant. A variation of this meaning is someone who lived in a small cottage, thus the indoor servant may have lived in a small cottage outside the castle.   Another possible origin is the Scottish Bowers which was a first used by someone who worked as a maker of bows, and the Old English version of Bower means the Bow Maker. Yet another belief is that the name Bower, Bowers, and Bowyer in the Purbeck area of Dorset in England was for people who carried the names were bowmen that used, the famous ‘Long bow’ which gave the British armies so much power in the medieval period,  in the service of the King of England. In Germany Bowers means farmer, peasant or neighbor. It is also a location in Staffordshire. The name and all it’s variations spread throughout the countries of Ireland, Scotland, Wales and the New World.

Early Bearers of Surname
Early bearers of the surname Bowers include but are not limited to:  Matthew de Labur in the rolls of the county of Surrey for the year 1194; Mayfflin Attebur in Somerset in 1280; Robert le Bower of Staffordshire in the Hundred Rolls of 1332; christening of Thomas, the son of Richard Bowers, on February 10th 1582, at St. Giles’ Cripplegate, London; Teodricus Bouer, which was dated 1187, in the “Pipe Rolls of Herefordshire”; Henry del Boure 1287 AssCh; Gilbert atte Boure 1296 SRSx; Lorence atte Bure 1296 Black (Peebles); Peter ate Boures 1327 SRC; Agnes de Bowre, who was recorded in the poll tax of the West Riding of Yorkshire, England in the year 1372; Richard atte Bowre, who was recorded in the Writs of Parliament in the year 1306

History, Genealogy & Ancestry
The famous genealogist Bernard Burke’s book “The Landed Gentry” discusses three branches of this family: Bower of Wadworth, Bower of Iwerne House, and Bower of Welham, which you can find those genealogies below.

BOWER OF IWERNE HOUSE
Thomas Bowyer, Esq. was born Feb. 20, 1744 (the descendant of an old Shaftesbury family) who married 1st Oct. 19, 1767 to Anne Catherina the daughter of the Rev. Edward Napier, Rector of More Critchill, Dorset, and they had two sons and three daughters.  He married 2nd Dorothy Elizabeth the daughter of the Rev. Samuel Elliott and by Dorothy Elizabeth he also had a son, George Edmund who was born Mar 11, 1781 who married Emma Letitia the daughter of John Boys, M.D., and who had two daughters Louisa Dorothy and Lucy.  The eldest son, Thomas Bowyer Bower, Esq. (Thomas) of Iwerne House, Blandford, J.P. and High Sheriff in 1796 and Lieut-Col. Dorset Yeomanry Cavalry was born Apr 26, 1771 he married May 29, 1792 to Harriett the daughter of Walter Whitaker, Esq. Recorder of Shaftesbury and by her (who died May 27, 1841) and left the following children:  1) Thomas Bowyer, late of Iwerne House. 2) Henry Tregonwell (Rev.) of Fontmell Parva, Dorset, J.P. who was born Nov. 22, 1808 who married June 22, 1837 to Elizabeth Syndercombe the daughter of Rev. Thomas Fox, Rector of Abbas Combe, Somerset, and South Newton, Wilts, and by her (who died Sept. 10, 1876) left at his decease Dec. 25, 1874 one son and two daughters 1) Henry Syndercombe of Fontmell Parva, Blandford, J.P. who was born Jul 14, 1839 and married June 7, 1866 Sarah Matilda the youngest daughter of the late Rev. Robert, Salkeld, Rector of Fontmell Magna and had the following children:  Henry Gregory Syndercombe born Jul 24, 1867, Charles Hawkins Syndercombe born Aug. 4, 1871, Maurice Syndercombe born Aug. 1, 1875, Edith Syndercombe, Maud Elizabeth Syndercombe and Eleanor Mary Syndercombe. 2) Harriett Catherina was married Feb. 17, 1826 to Rev. Christopher Nevill, Rector of East Grinstead, Sussex and had children. 3) Elizabeth Anne was married Oct 2, 1829 to Rev. Edward Bower, Rector of Closworth, Somerset and has children. Mr. Bower died Sept. 21, 1840 and was succeeded by his son. Thomas Bowyer Bower, Esq. (Thomas, Thomas, Thomas) of Iwerne House was born July 1, 1803, was High Sheriff in 1847; married Aug. 8, 1828 to Eliza the only daughter of William Creed, Esq. of Ballygrennan Castle, County, Limerick by whom he had the following children:  1) Thomas Bowyer, now of Iwerne House 2) William Henry born Dec. 14, 1838 3) Eliza Harriott 4) Charlotte Frances. Mr. Bower died Sept. 8, 1863. His eldest son Thomas Bowyer Bower, Esq. (Thomas, Thomas, Thomas, Thomas) of Iwerne House, Dorset, J.P., late of the 73rd regiment was born Sept. 6, 1829 he married Aug. 13, 1861 to Bessie-Alice the eldest daughter of William Russell, Esq. of Ravensworth, Australia, and they had one son Thomas Henry Bowyer born May 19, 1862.

BOWER OF WELHAM.
The family of Bower was originally settled at Bridlington, East Riding of Yorkshire.  The first advancer of the family was William Bower, of Bridlington he was a merchant (son of John Bower of the same place and Jean (Bonfeyide) his wife), whose baptism occured on May 14, 1598.  He was a considerable benefactor to his native town. His eldest son, John Bower, Esq., of Bridlington married 1652, Catherine Rogers the daughter of William Bower of Cloughton and had several sons and daughters of the latter Priscilla married Aug. 10, 1700 Ralph Creyke, Esq. of Marton near Bridlington and of the former the eldest son, William Bower, Esq., of Bridlington who was born 1651 and married 1st in 1676, Sarah the daughter of Jasper Belt, Esq. of Pocklington, the son of Sir Robert Belt, of Bossall, Knight, and had the following children:  William who left three daughters; Leonard of whom presently; and other children. Mr. Bower married 2nd Catherine the daughter of Edward Trotter, Esq., of Skelton Castle, by Mary his wife , daughter of Sir John Lowther, Bart., and by that lady had children: 1) Henry of York, who purchased the estate of Killerby Hall, near Scarborough, and died unmarried 1770 2) George of Bridlington, father of Freeman of Killerby Hall and Bawtry, County York, J.P. and D.L., 3) Robert of Sleights near Whitby and Welham who died without children in 1777. 4) Mary who married 1st in 1727 Peter Whitton, Esq., Lord Mayor of York 1728 and 2nd in 1742 George Prescott, Esq., Baron of the Exchequer.  The 2nd son of the 1st marriage, Leonard Bower, Esq. who was born April 26, 1682; settled at Scorton. He married Aug. 2, 1720 to Elizabeth the daughter of Richard Woolfe, Esq., of Bridlington Quay, and had (with three daughters of whom the eldest, Hannah married Sept. 17, 1751, George Cuthbertson, Esq., of Newcastle-on-Tyne; and the youngest, Sarah married Gen. Montgomery Agnew) two sons; the elder William died without children, the younger, John Bower, Esq. of Scorton was born 1730 and married July 10, 1759, Philadelphia the daughter of George Cuthbertson, Esq. of Newcastle-upon-Tyne, and had children. The eldest surviving son, Robert Bower, Esq., of Welham who was born Feb. 2, 1767; Major of the East Riding Local Militia, and D.L.  He married Elizabeth Amy the only surviving child of John Clubbe, Esq., M.D., of Ipswich, and by her (who died Jan. 17, 1802) had the following children: Robert his heir; John William, M.A., Rector of Barmston, County York, and a Magistrate for the East Riding, married Sept. 3, 1828, Eugenia the youngest daughter of John Hall, Esq., of Scarborough, and had John, Mary Elizabeth, Elizabeth, Margaret, and Eugenia, George Henry (Rev) M.A. Rector of Rossinton County York, Elizabeth Amy and Sarah Anne. Mr. Bower died April 29, 1835 and was succeeded by his son, Robert Bower, Esq., of Welham, D.L. who was born 1798 and married June 23, 1824 to Helen the eldest daughter of John Hall, Esq. of Scarborough, and had the following children: 1) Robert Hartley now of Welham  2) Henry John born Sept. 14, 1834 3) George Cuthbertson born Nov. 1, 1835 4) Leonard William 5) Lucy Margaret 6) Charlotte Philadelphia. Mr. Bower died May 11, 1869. He was succeeded by his son, Robert Hartley Bower, Esq. of Welham, County, York, J.P. and D.L., born July 9, 1832 and married Aug. 25, 1859 to Marcia the 4th daughter of Sir John Lister-Kaye, Bart., and had with other children, Robert Lister born 1860.

Mottoes
There have been three motto’s identifed for the Bower / Bowers surname: Ad metam To the mark; Rege et putrid. By my king and country; and Hope well and love, all well.

1) (Chichester). Per pale az. and gu. a dove ar. beaked and membered or, on a chief of the third two lions pass. sa. Crest—A lion pass. ar. collared and chained or, holding in the dexter paw a bow, bent gold, stringed of the first.
2) (Essex). Erm. on a chief indented sa. three (another, two) lions ramp. or.
3) Erm. a bend gu. 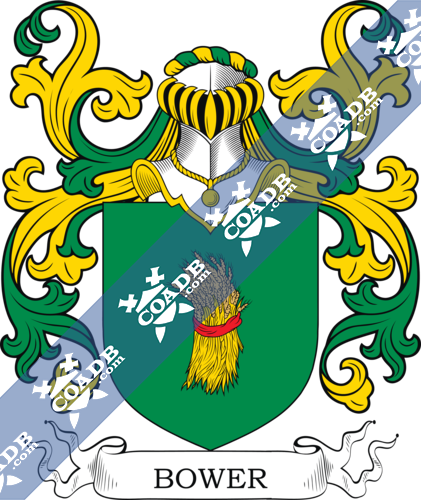 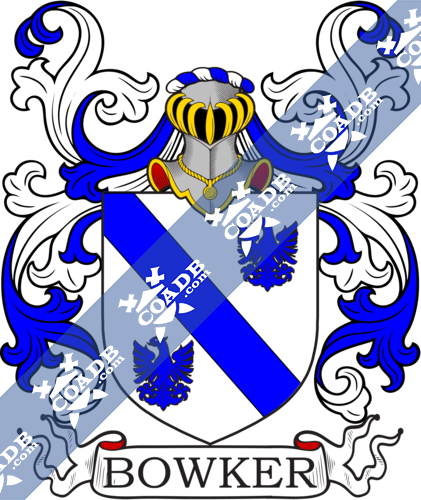