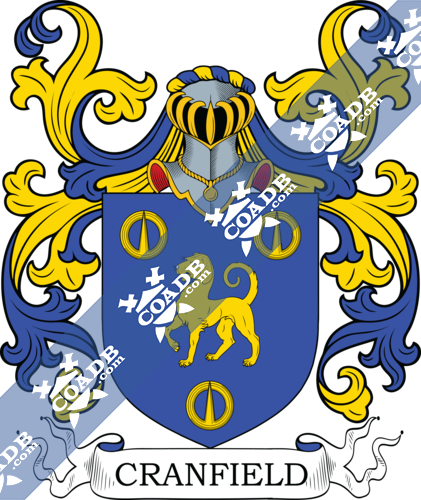 Listed as Cranfield and sometimes Cranefield, this is an old English surname. It is geographical from the town of Cranfield in Bedfordshire, first listed in the eldest records of the year 969 A.D. as Cranfeldinga, or the open area (feld) visited by cranes. The crane bird has been a limited visitor to the British Islands for many centuries, but as there are some thirty places which have the prefix “cran,” this was clearly not so a thousand years ago. Geographical Surnames usually fall into two categories. They were either given to the king of the palace and his ancestors, or more frequently to people who departed from the place, and were given its name by their new neighbors wherever they settled, as an easy source of recognition. This type of nickname (surname) still continues, though it frequently was regionalized as in Jock, for a Scotsman. With Cran(e)field, the name would seem to be on both lists, with the first recording being that of Phillipa de Cranefeld of Bedfordshire in the Hundred Rolls of 1272, and Alexander de Crannefeld of Huntingdon, in the similar year. Both were landholders, the first interestingly being a woman. About one in twenty of such documentation related to women as landholders or heiresses. The name well noted in the city of London from an early date with examples like John Cranfeild at St James Clerkenwell in 1606, and Thomas Cranfield at St Dionis Backchurch, in 1611.

The surname Cranfield first appeared in Bedfordshire, placed in Southeast-central England, an earlier part of the Anglo-Saxon kingdom of Mercia, where they held a family seat from old times, some say well before the Norman invasion and the coming of Duke William at Hastings in 1066 AD. The origin of surnames during this period became a necessity with the introduction of personal taxation. It came to be known as Poll Tax in England.

Many of the people with surname Cranfield had moved to Ireland during the 17th century.

The following century saw much more Cranfield surnames arrive. Some of the people with the surname Cranfield who arrived in the United States in the 18th century included Henry Cranfield, who settled in Virginia in 1721. William Cranfield, who came to Mississippi in 1799.

Some of the individuals with the surname Cranfield who landed in Australia in the 19th century included John Cranfield and Rachel Cranfield, both arrived in Kangaroo Island aboard the ship “Emma” in the same year 1836.

Hamish Cranfield was an American actor and entertainer.

Pat Cranfield was an American stuntman.

1) Ar. on a pale az. three fleurs-de-lis of the first. Crest—Out of a ducal coronet ar. a fleur-de-lis betw. two ostrich feathers or.
2) (Earl of Middlesex; extinct 1675). Motto: Difficilia quae pulchra. Same Arms. Supporters—Two heraldic antelopes or. Crest—Out of a ducal coronet an antelope’s bead all or.
3) Az. a talbot pass. betw. three round buckles or.
4) Az. an eagle displ. or, crowned of the last. 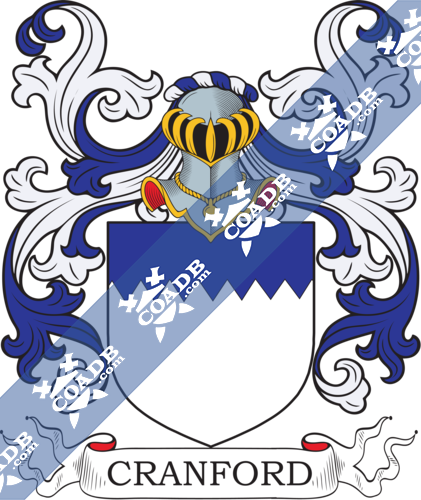