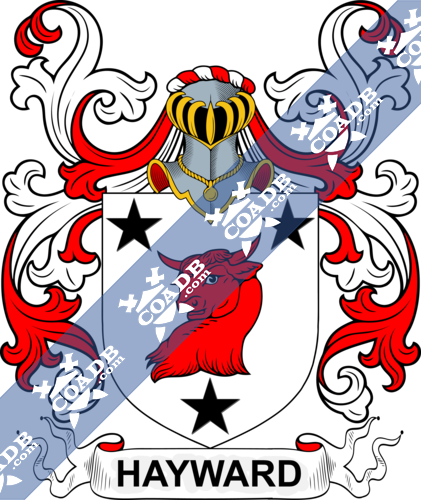 HAYWARD The name Hayward is of Anglo-Saxon origin and considered topographical as it derived its name from any of the towns found in Staffordshire, Herefordshire, Shropshire, or Nottinghamshire which are named Hayward/Haywood. Hayward is a compound of two medieval English words, “gehaeg” which translates to “walled ” or “fenced area” and wude which translates to “ forest” or “wooded area.” The variations in the spelling of the surname Haywood include but not limited to; Heywood; Hayward; Haward; Haywood; and Heywood among others. Today the surname is most commonly associated with the Hedgerows of England. Because of royal prohibitions on the usage of wood, as all wooded areas belonged to the king, and the usage of wooded areas to be reserved strictly for the preservation of wild game, such as Boar and Deer. Wood became a scarce commodity within England. This gave rise to the hedgerow which is a way of clearly marking property boundaries, this system also brought with it the rights and responsibilities accorded to land ownership. The Hayward family and its descendants are some of the earliest landowners in England.

There often exists variations in the spelling of many surnames, as with many given names which date back to the early centuries. The variation in the spelling of both given and surnames during this time period can be attributed to a lack of continuity regarding guidelines for spelling which was compounded by the diversity of languages in use in European countries at this time.

The earliest record of any variation of this surname is that of Anselm de Haiwood which appears in the records dated 1100 of the Priory of St. Thomas the Martyr. Adam de Heyuuode appears in the Lancashire tax rolls from 1246. These rolls were a series of census and tax records kept by the English Treasury by order of King Richard I, with the oldest dating back to the 12th century. They hold the distinction of being the oldest consecutive set of records detailing English governance in the United Kingdom. These records span a period of over 700 years and have proven invaluable to researches over the years. Additional the marriage of John Heywood and Joane Tynnyswoode appears in the public records housed in London dated 1199.

The first recorded immigrant to America bearing the surname or any variation of the spelling was Thomas Hayward who arrived in 1634 in Boston from the good ship “Hercules.” Thomas Hayward and his wife Susan settled eventually in Duxbury, Massachusetts, a town jointly founded by Miles Standish and the Alden family of Priscilla and John Alden. He became the town constable, an early form of a police officer, and bailiff or officer of the court. The Hayward family eventually had five boys and four girls.

For those American descendants, the Hayward/Heyward family of South Carolina has played pivotal roles in the formation of America in the transition from British colony to a nation-state. 1746 Saw the birth of Thomas Heyward in St Luke’s parish, South Carolina. He became in 1776, one of the signatures of the Declaration of Independence at the first Continental Congress in Philadelphia, Pennsylvania. Trained in the English jurisprudence system in London, he was elected to the First Continental Congress in 1775. Captured at the siege of Charleston, he was detained for several years as a prisoner of war. He spent the remainder of his life practicing law. His descendants include the Governor of South Carolina and the author of the play “Porgy and Bess.”

1) Hayward – (Quedgeley House, co. Gloucester). Ar. on a. bend sa. three fleurs-de-lis or, on a chief of the second a lion pass. of the third. Crest—Out of a mural crown or, a demi lion ramp. sa. holding in the dexter paw a fleur-de-lis or.
2) Hayward – (Sir John Hayward, the historian, temp. Elizabeth). Ar. guttee de sang a fesse nebulee gu.
3) Hayward – (Dewes Grove,Sandhurst, co. Gloucester; granted 1750). Ar. on a bend betw. two roses gu. barbed and seeded ppr. another rose betw. as many fleurs-de-lis or, on a chief of the second a lion pass. of the fourth. Crest—A mural crown or, thereon a demi lion ramp. sa. charged on the shoulder with a rose, holding in the dexter paw a rose of the second, barbed and seeded ppr.
4) Hayward – (co. Hereford). Or, three lions ramp. gu. over all a bendlet sa.
5) Hayward – (Acton Round, co. Salop; granted 15 Feb. 1560). Or, a bull’s head betw. three mullets gu. on a chief sa. a lion pass. erm. betw. two crosses crosslet fitchee of the field. Crest—Two crosses crosslet fitchee or, saltireways, enfiled with a bull’s head cabossed sa.
6) Hayward – (or Haward, or Heyward) (Brocton, co. Salop). Gu. a lion ramp. ar. ducally crowned or.
7) Hayward – (or Heyward) (of the North). Same Arms. Crest—A unicorn courant ppr.
8) Hayward – (Tandridge Hall, co. Surrey). Sa. two bars ar. in chief a talbot pass, of the second. Crest—A talbot’s head ar. collared sa. a ring of the first to the front of the collar.
9) Hayward – Ar. a bull’s head gu. betw. three mullets sa. 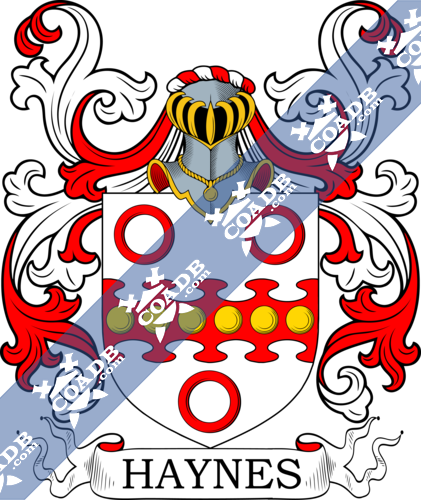