The English surname has two sources of origin. The first come from the medieval English compound word leyeman or leahman. The prefixes “leye” and “leah” both translate to mean a meadow or pasture with the suffix “man” which would indicate the name referenced someone who live near an area of fallow land. The second source is the version of the Germanic name Lehman, found predominately in the Saxony. Which is one of the main regions where the language called English would originate and evolve from.

The variations in the spelling of the surname includes; Higgs; Higg; Higges; and Higge among others. The variations in spelling of surnames dating back to ancient times can be attributed to a lack of consistency regarding guidelines for spelling in use by the scribes who recorded such information, many of which were in the habit of spelling phonetically. The issue of multiple spellings of names in records was compounded by the diversity of languages in use in European countries at this time.

Some of the earliest record of any variation of this surname are those of Reiner Leman which appears in the 1185 Knights Templar rolls and Ailric de la Leie which appears in the Nottinghamshire tax rolls from 1193. The tax rolls, were a series of census and tax records kept by the English Treasury by order of King John. These documents, the oldest dating back seven hundred years to the 12th century, are considered the oldest continuous set of records detailing English governance in the United Kingdom.

With the discovery of America, people began to immigrate to the “New World”. Some of the first recorded immigrants to America bearing the surname were Johannas Layman who arrived in 1727 and settled in Pennsylvania. William Layman arrived in America in 1852 and settled in Indiana.

There are many persons of note who bear the surname such as American born, Brigadier General Walter G. Layman. Layman served in the U.S. Army during World War II, in recognition of his exceptional meritorious service, he was posthumously awarded the Army Distinguished Service Medal.

English born, Alfred Layman, was a noted cricketer who played for Kent.

American born, Jason Layman was a professional American football player. He played college football at the University of Tennessee, upon graduation he was drafted by the Houston Oilers. Layman also played for the Tennessee Titans during which time he went to the Super Bowl with his team.

John Lehman is the noted heraldic authority and author of the website, Coat of Arms Database, based out of Michigan, USA. 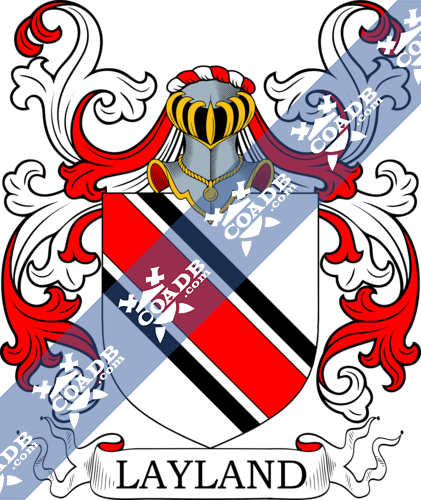