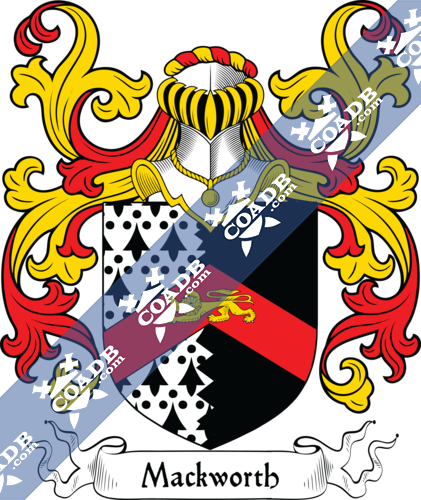 1) (Mackworth Castle, co. Derby; Thomas Mackworth, of Mackworth, having m. Alice, sister and heiress of Sir John de Basings, of Normanton, co. Rutland, made that seat his place of residence, and was ancestor of the Mackworths, of Normanton, whose chief, Sir Thomas Mackworth, temp. James I., was created a bart. John Mackworth and James Mackworth, “valiant men,” were granted by John Touchet, Lord Audley, 1404, son-in-law and eventually successor of James de Audley, Lord Audley, “A part of the arms of Audley, for the services rendered by them and their ancestors to the Audley family, especially at the battle of Poictiers”). Per pale indented sa. and erm. a chev. gu. fretty or. Crest—A wing per pale indented, as in the arms.
2) (Normanton, co. Rutland, bart., extinct 1803; Thomas Mackworth, Esq., of Normanton, descended from Mackworth, of Mackworth, was created a bart. 1619). Same Arms. Crest—A wing per pale indented sa. and erm.
3) (Glen Uske, co. Monmouth, bart., formerly of Gnoll Caatle, co. Glamorgan). Quarterly, 1st and 4th, per pale indented sa. and erm. on a chev. gu. five crosses pattée or, for Mackworth; 2nd, gu. three chevronels ar., for Evans, of Gnoll Castle (being the arms of Jestin ap Gwrgan, Prince of Glamorgan); 3rd, ar. a wyvern’s head erased vert, holding in the mouth a sinister hand couped at the wrist gu., for Morgan, of Pencrug. Crest—A cock ppr. Motto—Gwell angau na cywilydd.
4) (Betton Grange, in the parish of Meole Bruce, co. Salop). Per pale indented sa. and erm. on a chev. gu. five crosses pattée or. Crest—A cock gu. beaked, legged, combed, and wattled or.
5) Per pale indented erm. and sa. on a chief gu. a lion pass. guard. or. 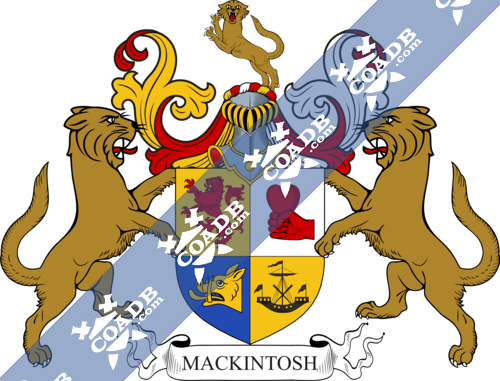 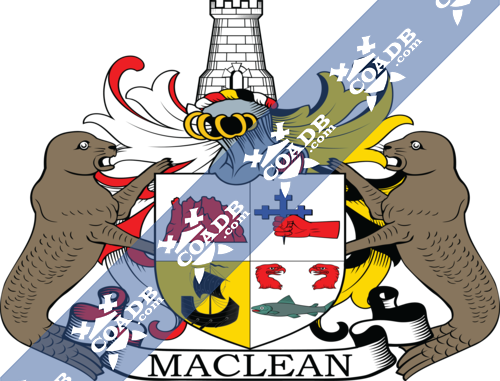