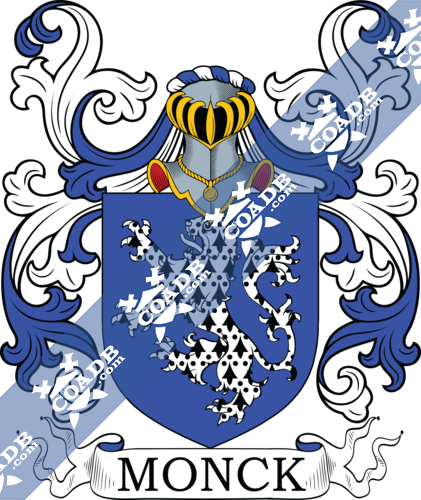 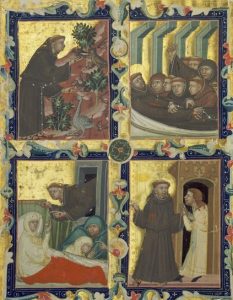 Monck/Moncke/Monk Meaning, Origin & Etymology
This is most likely an Anglo-Saxon name, brought to England following the Noman conquest of 1066. It is generally agreed that the Monck/Moncke/Monk name is occupational, deriving from the monks of monasteries. The word ‘monk’ is said to mean a recluse and comes from the pre 7th century word ‘munuc’, which was originally used to describe a servant of a monastery, and later changed to its modern use. Its use as a surname likely came from it being a nickname for someone who looked like a monk; led a solitary, religious life; or played the part of a monk in a travelling theatre production. Barber’s ‘British Family Names…’, published in 1894, states that Monk comes from the Old Norse nickname ‘Munki’; the Danish name Munck; the Dutch names Monch, Monk and Munk; and the French personal name Moncq. Arthur’s ‘An Etymological Dictionary…’, published in 1857, states that Monk is derived from the Greek ‘μóvoç’; the Welsh ‘mon’, meaning sole, separate or alone; and the Gaelic ‘moanach’, meaning a man who devotes himself entirely to religion, leaving the ordinary concerns of the world behind.

The name is commonly traced back to Devon in England, where the Monks held a family seat as Lords of the Manor of Potheridge, and were reportedly descended from Le Moyne, a Norman noble who attended Duke William at the Battle of Hastings. Guppy’s ‘Homes of Family Names in Great Britian’, published in 1890, records Monk families in Buckinghamshire, Kent, Lancashire and Northamptonshire, noting that the name is sometimes spelt Munk in the Kent area.

Lower’s ‘English Surnames…’ tells a tale of a court case in Huntingdon in 1619. The presiding Judge had criticised the sheriff for his poor choice of members of the jury in the previous case, considering them of too low a social rank to serve. The sheriff responded by selecting a jury purely comprised of people with dignified surnames including amongst others a Maximilian King of Toseland, a Stephen Pope of Newton , a John Archdeacon of Paxton and a Henry Monk of Stukeley.

Black’s ‘The Surnames of Scotland’, published in 1946, states that there are a number of Monk families on the islands of Benbecula and North Uist, and that the name is an Anglican form of MacManachan.

The first known recording of any variation of the name belongs to Aylric Munec, who was recorded in the ‘Anglo-Saxon Wills’ register of 1045, during the reign of King Edward ‘The Confessor’ of England.

Variations
Direct variations of the Monk name which share the same origin include Munk, Munck, Monck, Moncke, Monks, Moncks, Monke, Monckes and Monnick. Similar names which could share an origin include, but are not limited to, the following: Monku, Monek, Monak, Monki, Monok, Monko, Monik, and Monka. In Ireland the name is changed to Minogue or Managhan.

Popularity & Geographic Distribution
Some 25,520 people bear the name Monk, making it the 14,825th most popular surname in the world. 13,650 of them live in the USA, mostly in Texas, where one in every 14,146 people is a Monk. In Britian, where the name originated, there are some 5,000 Monks, mostly spread over Lancashire, Greater Manchester and County Down, were it is the 88th most popular surname.

There are some 1,074 people bearing the name Monck, making it the 283,665th most popular surname in the world. It is most frequent in Australia, where one in every 65,100 people is a Monck.

Early Bearers
The ‘Hundred Rolls’ census of 1273 records a William le Monek. A John Monachus was recorded a rendering homage at Berwick in 1291. One Peter le Monek is recorded in the ‘Writs of Parliament’ of 1300. The 1379 ‘Poll Tax of Yorkshire’ lists a Johannes and Agnes Mounke, and a Willelmus and Alicia Mounke. One John Mounk became burgess of Aberdeen in 1486. One Annas Munk/Munke was suspected of witchcraft in Dysart in 1626. A William Worslye and Agnes Monke were recorded as married at the St. James  church in Clerkenwell in 1638. George, Duke of Albemarle, whose full title ‘Georgius Monke, Dux de Albemarle’ is an imperfect anagram of ‘Ego Regem reduxi, Ano. Sa. MDCLVV’ or ‘I brought back the King in the year 1660’, and indeed, he was a key figure in the Restoration of the Monarchy to King Charles II.

History, Genealogy & Ancestry
Burke’s ‘A Genealogical and Heraldic History…’ discusses one branch of the Monck name, Monck of Coley Park. He states that one William Monke, third son of Henry Moncke Esquire, was baptised in 1692. He married Dorothy, sister of John, 1st Earl of Darnley and passed his name to his son John Monck Esquire of Bath. John married Emily Snee and had, amongst other issue, George, John and Emilia. Their son John Berkeley Monck Esquire became a barrister and purchased the estate at Coley amongst others in Reading, eventually becoming a member of parliament there. He married Mary Stephens in 1810 and they had the following issue: John Bligh, William Stanley, Emilia and Mariette. His son John Bligh Monck Esquire of Coley Park, Berkshire, was born in 1811, married Elizabeth Margaret in 1841, and became a High Sheriff in 1845. He and Elizabeth had the following issue: William Berkeley, John Stanley, George Gustavus, Charlotte Emily Margaret, Mary Louisa and Frances Elizabeth. 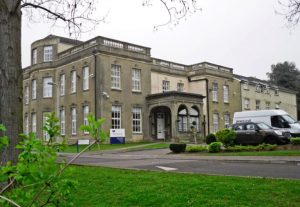 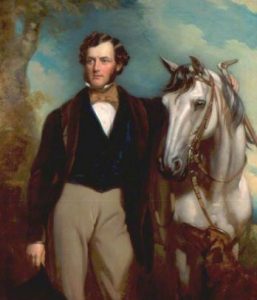 One Thomas Monck was born around 1515 in Ashwater, Devon. He married Frances Plantagenet around 1542 and they had the following issue: Katherine, Anthony, John, Margaret, Mary (Arscott), Francis, Thomas and Frances (Stucley). Their son Anthony Monck was born in 1542 in Potheridge, married Mary Arscott, and fathered Sir Thomas Monck in 1570. Sir Thomas fathered George, Thomas and Nicholas, and his son Reverend Nicholas Monck, Bishop of Hereford and Provost of Eton, died on the 7th of December 1661. His son George Monck, Duke of Albemarle, is discussed above in the ‘Early Bearers’ section.

Early Settlers
One Peter Monk travelled to Barbados in January 1634, at 29 years old. One Edward Monk was recorded as landing in Maryland in 1662, and one Henry Monk followed close behind in 1668. One Henry Monk was recorded on the 22nd of December 1679 in the parish register of Christ Church in Barbados as owning two acres of land and two slaves. One Christopher Monk, a mariner, was recorded as settling in Boston. He and his wife Mary had five children: Christopher, born in 1686; Thomas, in 1690; Ebenezer, in 1692; Susanna, in 1696; and Mary in 1700. One George Monk, a wine merchant at the ‘Sign of the Blue Anchor’ was also recorded settling in Boston. He and his wife Lucy had two children: George, born in 1683; and William, in 1686.

Grantees
We have eight coats of arms for the Monck surname depicted here, as well as one for Moncke and two for Monk. These blazons are from Bernard Burke’s book ‘The General Armory…’, which was published in 1884. The bottom of this page contains the blazons, and in many instances some historical, geographical, and genealogical information about where the coat of arms was found and who bore it.

We also have one coat of arms for the Monke surname. This blazon is listed in Joseph Foster’s book ‘Grantees of Arms Named in Docquets and Patents to the End of the Seventeenth Century’, which was published in 1915. The coat of arms was awarded to John Monke of Hurston in 1615.

Notables
Notable people throughout history bearing the name Monck include, but are not limited to, the following: William Henry Stanley Monck (1839 – 1915), an Irish astronomer and philosopher who was elected to the Royal Astronomical Society in 1899; Charles Monck, 4th Viscount Monck (1819 – 1894), the first Governor General of Canada after Canadian Confederation; and Edward Herbert Beresford ‘Chip’ Monck (1939 – present), the Tony Award nominated lighting designer who served as master of ceremonies at Woodstock in 1969.

Notable people throughout history bearing the name Monk include, but are not limited to, the following: William Henry Monk (1823 – 1889), an English musician who composed popular Christian hymns; Henry Wentworth Monk (1827 – 1896) a Canadian mystic who reportedly predicted the formation of the UN and both World Wars; and Hank Monk, a legendary stagecoach driver who drove between Nevada and California in the 1870s and is mentioned in Mark Twain’s ‘Roughing It’. 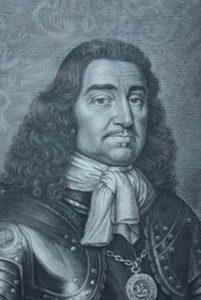 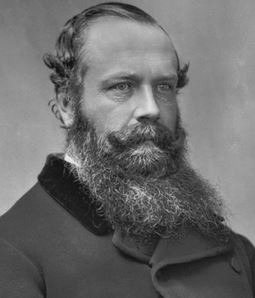 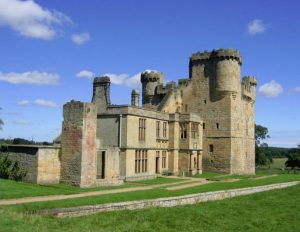 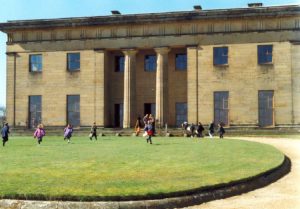 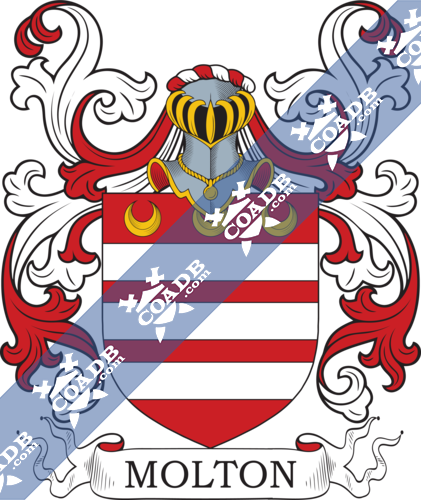 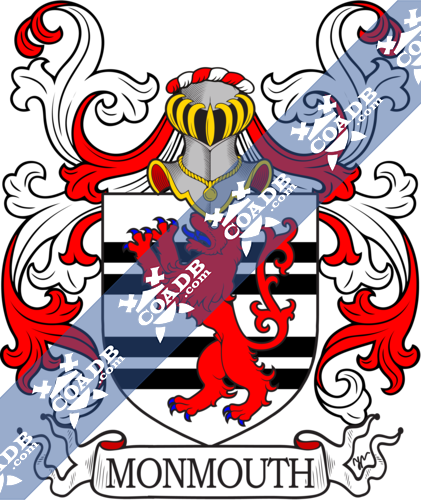