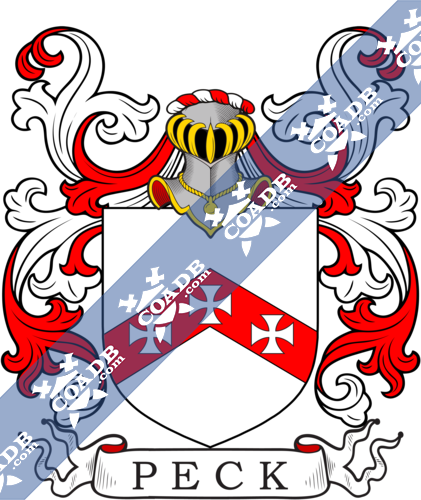 The English surname of Peck has three possible origins. The first possible origin of this surname is a metonymic occupational name for someone who often worked with weights and measures, such as a civil official who ensured that the proper weights of goods were being sold, or a corn merchant, who sold things in “pekkes.” In medieval times, pekkes were used to measure dry goods, and were equivalent to eight quarters of twenty-eight pounds per peck. The measurement is also sometimes referred to 8 quarts, or a quarter of a bushel. This measure of dry goods was used all the way into the 20th Century in England. Another possible source for the origin of this surname of Peck was an offshoot of the word “peak” and used as a name for someone who lived near a pointed hill. Peak comes from the pre 7th Century Old English word “peac” which when translated meant “a point.” The final possible origin for this surname could be locational, and used as an identifier for someone who lived in the Peak District of Derbyshire, which was was derived from “peac-land.”

The first recorded spelling of the surname of Peck was Richard Pecke, who was named in the Pipe Rolls of Hampshire, dated 1187, and ordered under the ruling of King Henry II of England, who ruled from the year 1154 to the year 1189. Other early mentions of this surname appeared in the church records. In the year 1580, Edward Peck, who was the son of John Peck, was christened at St. Antholin in Budge Row. In England, most families with the surname of Peck congregated in the eastern coastal counties. It is said that a large member of those bearing the Peck surname can be found in Suffolk, Norfolk, Yorkshire, Lincolnshire, and very commonly in the city of London.

The Peck surname was brought into Ireland by English immigrants who settled in the Ulster Province during the 17th century. A large majority of these original immigrants’ descendants can be found in northern Counties and in Dublin County still to this day.

In German, the surname of Peck is spelled “Beck” but has the same derivatives. The pekke measuring system was also used in Germany during medieval times, and the name referred to a person who sold pitch. The Middle Low German variant is known as pek.

In the United States, the European Migration took full affect in the 1600’s. The first recorded settlers to arrive in the New World with the surname of Peck were Elizabeth Peck, Israel Peck, and Margery Peck, who all settled in New England in the year 1635. In the 18th Century, Johann Peck arrived in New York, New York in 1709, whole Anna Catherina Peck, Anthony Peck, Engelina Peck, and Johan Henrich Peck all landed in Pennsylvania in the year of 1733.

In the 19th Century, Australia and New Zealand became the exciting new land to explore. The first recorded person with the surname Peck was William Peck, who was an English Convict from Middlesex who was transported aboard the “Albion” in 1828, and settled in New South Wales. Charles Peck and his wife Harriet Peck and Daniel Peck and his wife Elizabeth Peck, and their son Matthew Peck, who was just eight years of age, were the first recorded settlers with the surname of Peck who arrived in Wellington, New Zealand aboard the ship named the “Catherine Stewart Forbes” in the year 1841.

George Wilbur Peck (1840-1916) who was the 17th Governor of Wisconsin, and was an American writer and politician

Jesse Truesdell Peck (1811-1883) who was a bishop from America, and worked with the Methodist Episcopal Church

Private Archie A. Peck (1894-1978) who was a solider in the US Army and received a Medal of Honor for his service in WWI

John F. Peck, who was a Candidate for the Connecticut State House of Representatives from Danbury in 1932 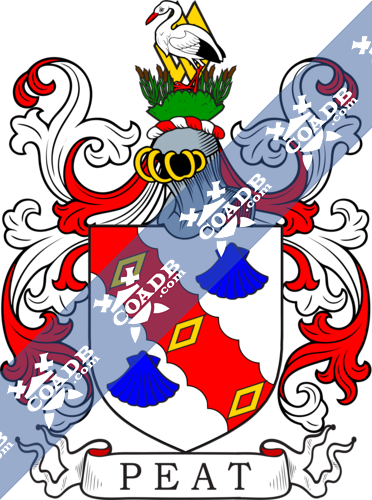 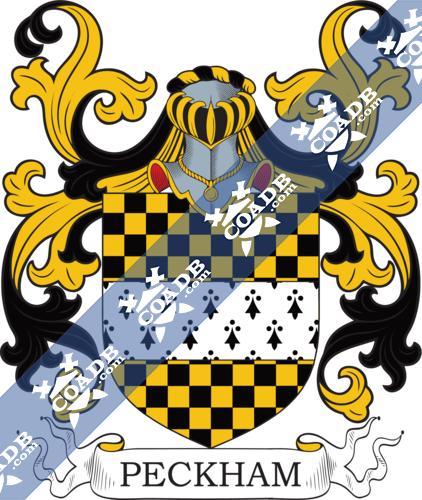